With some new features but some old annoyances, Onimusha 2: Samurais’s Destiny is just as fun as the first game. 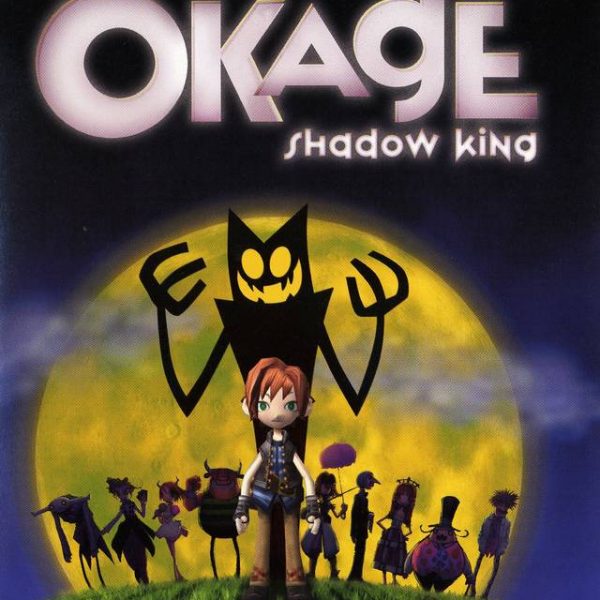 Author’s Note: This review was originally published on March 1st, 2003, and later updated on April 30th, 2010. I’m not sure why I updated it without adjusting the score. Today, I feel Okage scores lower than an 8/10.

I heard a ton of mixed opinions about Okage Shadow King, but because it was an RPG I decided to try it. And many said if I liked Ephemeral Fantasia, then I’d like this too. While Okage wasn’t the best RPG I’ve ever played, it was still a worthy title to complete.

Story 10/10:
Ari is a young and innocent boy who is overshadowed by…everyone. One day, the circus arrives and Ari goes to see it with his sister, Annie, at night. However ghosts appear at night, and one hits Annie and curses her with…THE CURSE OF PIG LATIN SPEECH!! NOOOO!! So Ari’s father decides to take a mysterious bottle and open it up in hopes of allowing the contents inside to cure Annie and allow her to talk normal again. Annie is cured…but Ari gets his shadow possesed by what was in the bottle: The Evil King Master Stanley HiHat Trinidad XIV! However Evil King Stan doesn’t have his true form. So with Ari as his new slave, he must venture off and get rid of the Fake Evil Kings in order to allow Stan to reach his maximum power and conquer the world and release Ari of this spell. If you haven’t guessed, this plot is totally original! I loved this story, and I think this was the best part of the game. What’s even better is the awesome climactic twist! An awesome story indeed!

Gameplay, Field 9/10:
The camera can really get frustrating at times, but other than that the gameplay is fine. The menu screen is really easy to use. The world map is also easy to navigate through. The field gameplay shouldn’t give you much trouble. It’s just your standard RPG. The dungeons are pretty easy to navigate through too. Each dungeon has Urns on the floors. To proceed, you must kill the Urns. It’s simple enough.

Gameplay, Battles 3/10:
It really pained me to give this a 3/10 but it just has to be. You start a battle by walking into a ghost on the screen. They randomly pop out of nowhere, and that can get really frustrating at times. The battles are your average turn based battle system. You have a gauge that fills up like in Final Fantasy. Unlike FF however, when a character’s turn arrives time freezes, similar to Grandia. So you can take your time when choosing an option. You have your basic options, attack, defend, item, special…you know how that works. A new addition is when you select defense, you can choose to Wait. This option allows you to Combine with your teammates to attack one enemy for COLOSSAL damage.

So time for the bad parts. First off, there are only three elements: Fire, Ice, and Thunder. What’s worse is that the magic is like rock, paper, scissors. Fire is strong against thunder…ok that makes no sense. Next, if Ari reaches 0 HP, it’s game over. Yup, you don’t get a chance to revive him at all, it’s just plain old game over. The next bad part is the experience system. When you reach 1000 exp, you get a level up. However, enemies don’t give a fixed amount of exp. so once you reach a certain level, the enemies you used for training will give you terrible exp. What’s even worse is the difficulty. At some point in the game, you’re going to have to train and train in order to become strong enough to survive random battles. But the easy enemies give you BAD exp, and the hard enemies are hard. While there is a sense of strategy to battling in this game, you are going to want to stop training so you can continue with the story. The boss battles are, however, the absolute worst. Each boss comes fighting with four mini-bosses which are a pain to kill. And you have to keep Ari alive while trying to attack these four mini-bosses. When you do kill these bosses, the main boss is even harder! It can do multiple hits in a turn, and if it goes after Ari, then you might as well say goodnight. While after a certain point the battles are easier, the majority of the game is really difficult and discouraging. I almost stopped playing because the battles just frustrated me to an extreme. So overall, the battle just plain suck. This is quite a shame because in an RPG, battles are what you do most of the time.

Gameplay, Character Development 10/10:
This is another area where the game shines. You are going to LOVE the characters in this game. Each character is funny and has a story to tell. For instance, one character dreams to become a teen idol, but she is kind of evil…
There were times I was on the floor laughing due to Stan being the hilarious Evil King he is. If you haven’t really guessed, this is a funny RPG that only gets serious at a few certain points.

Graphics 10/10:
Awesome awesome awesome! The character designs are a mixture of anime and Tim Burton’s The Nightmare Before Christmas. The main characters are truly uniquely designed, and even the NPC’s have original design. The backgrounds are equally nice. The entire settings of the towns, mountains, forests…you name it are simply stunning. The graphics are probably the best thing this game has next to the story.

Music 9/10:
There are two battle tracks: One for the field map and one for the dungeon map. Each character has their own music. The town music can get repetitive at times, but it’s nothing too bad. I’m sure you will find yourself humming along to the music at times. The game has great music!

Sound 10/10:
Umm…it’s there. There are no voices done by the characters, but I don’t mind because that can usually result in me being annoyed by BAD DUBBING! The only voice is that of the narrator. But yeah, the sound is just fine.

Replay Value 4/10:
There are some people who love this game and will play again and again. For me, once through was plenty because I don’t want to deal with battling and leveling up again. And because this game is an RPG, I already know what’s going to happen.

Difficulty Hard:
As I said, the battles make this game annoyingly tough. Also, money can become a problem at times too because new equipment is EXPENSIVE! If you want a mega challenge, then this game is for you.

Buy or Rent? Rent:
Rent Okage first because at first everything will seem easy but later in the game things get hard. You don’t want to purchase a game that frustrates you, and there is a high chance that it will.

The title of the review means that the game starts off fun, then gets horrific, but goes back to being fun again. If you want to brag about something, saying that you finished Okage: Shadow King would be something to start with. Overall it was a good quest, but I’m not going to play it again.