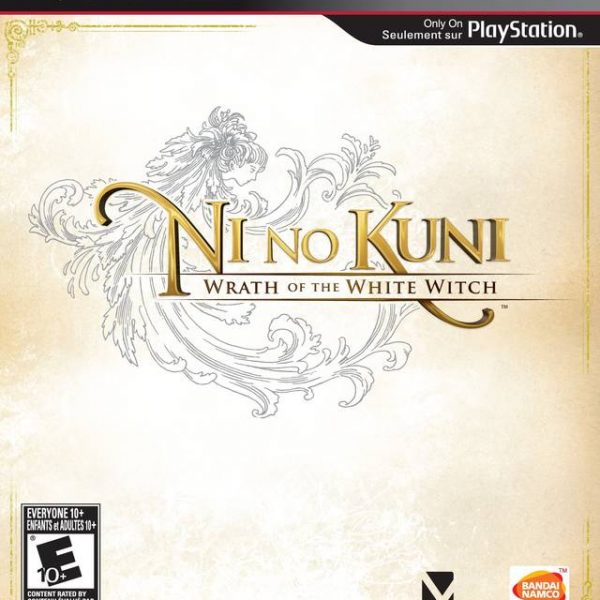 Author’s Note: I selected this as one of my favorite reviews because it lead to some very interesting discussions after it was published. I find it fascinating that gamers can overlook glaring gameplay flaws due to a strong graphical presentation.

This is one of the harder reviews for me to write because Ni no Kuni: Wrath of the White Witch is a game I want to praise until blue in the face. Er…red in the fingers. Or something like that. Level 5 games are usually hit or miss with me, but NNK is somewhere in between. The story and narrative are wonderful, with some memorable characters and locations. There are a few fun things that you can do in the game when you’re not advancing the story, and there is no doubt the presentation is as solid as the lantern hanging on Mr. Drippy’s nose. However, for a game with so much content, it’s difficult to play it in long increments because the battles are frustrating and the despicable AI has a tendency to mess you up every chance it gets. And, as expected, there are times when it will feel like there is almost too much to do and it can feel overwhelming. So, let’s get to it!

Welcome to Motorville, where residents drive at 2 MPH and vintage cars aren’t as hideous as you would expect. Our hero is enjoying a worry-free life, and guess what? His name is Oliver. First of all, Oliver is not the name of a person who saves the world. Nay, Oliver is the name of a pocket protector using, bow tie wearing, nerd of a guy who makes a few dollars by completing the school bullies homework assignments. Am I focusing too much on his name? I am not. Oliver is a nice kid, but his name. God that name. If I were his mother, I’d get what’s coming to me: a swift death. Wouldn’t you know it? That actually happens. Not because of her poor naming skills, but because of her weak heart. After saving his son from drowning, she ends up having a heart attack and passing on to the afterlife. Oliver is upset, and understandably so. I’d be upset too if my name was Oliver! No, actually, it’s because his mom died, but with a few tears he brings the high lord of the faeries, Mr. Drippy, to life from the form of a stuffed animal. Mr. Drippy wears a lantern nose-ring. I just wanted to let you all know that. He informs Ollie-boy that they might be able to bring the mom back to life, but he has to travel to a new world and defeat the dark djinn Shadar.

Despite Oliver being named Oliver, the story of NNK is what you would expect from a Studio Ghibli (who played a major role in the game’s development) film. There is fantasy, adventure, whimsy and mysticism. There is so much culture and life that you will feel immersed immediately as soon as you get transported to the new world. This is one of those types of games that would have been fine not being a game at all since the story is so well-executed. Fans of anything that has to do with Studio Ghibli will fall in love from the get-go. A good chunk of this tale is voiced, and you will feel as though you are in control of an animated film. Unfortunately, other segments of the story are with typical RPG-fare with “bleep bleep bleep” sounding dialogue that really takes away from the tale. Nearly three quarters of the residents in this game this game have some form of accent, and not hearing them speak takes away from the unique cultures. More voice acting would have been welcome, and at times, necessary.

But, when the voice acting is in play, it is excellent. You can usually tell when care is given to a game’s presentation. Level 5 is known for making some nice looking and sounding games and NNK is no exception. The music is, in a word, brilliant. Turn up the volume and prepare yourself for a wonderful score of songs orchestrated to perfection. Much like the story, the music adds to the game in such a way in that it feels like you are actually in control of an animated film. The graphics are, also in a word, brilliant. Not only are they brilliant in the sense of them being bright and colorful, but they are also brilliant in that the Studio Ghibli style fits perfectly for this game. I think people will go gaga over the creativity used in order to give NNK a setting unique in every way.

Another Level 5-ism that long-time fans will recognize will be the amount of stuff to do. If you remember Rogue Galaxy, you remember that there was always some side-quest or hunt to finish. Well, NNK is similar. Let me count the ways. You have bounty hunts and errands, both of which earn you merit points that let earn you passive abilities. These are fun most of the time, but they can get irritating if they have you traveling all across the world or if they make you use alchemy. Ah, alchemy. Where would the RPG genre be without alchemy? Don’t answer that, because unless your name is Atelier Female-Name, alchemy is usually a problem. NNK’s case is no different because ingredients are so hard to come by. Hours upon hours will be needed for farming certain items for certain quests and the worse thing is you need to make 120 items in order to platinum the game. I know that I shouldn’t knock a game for things like trophies and 100% completion, but they could have made this more fun by taking a cue from the Atelier series and making ingredients more available. There other ubiquitous things like a casino and an arena, as well a metric-crap-ton of treasures to uncover. Most of this stuff is fun, but like I said, the item creation aspect needs work.

One of the other trophies that will likely tick you off is the one in which you have to capture 250 familiars. This brings me to the battle system, which is either an absolute nightmare or a mediocre test of wits. Monsters are seen on the world map and on the dungeon, but often times run faster than poor Ollie-boy. Thus, battles are usually unavoidable but disguised as being avoidable. At first, Ollie-boy is on his own and fighting against bullies who kick him around from being named Oliver. No, actually, he can attack, use magic, use items or run away. Later in the game when you get the other two main characters (Esther and Swaine) you can issue commands and change tactics. Near the end of the game, a fourth and unimpressive character joins you so I won’t mention anything about him. The majority of the time, you’ll be using your familiars instead of your human characters. While there are a variety of these critters, they come in one of four signs: sun, moon, star and planet. Utilizing a rock-paper-scissors system, certain signs deal better with others. Each of the four human characters can have up to three familiars, and each familiar can be switched on the fly. Also, familiars have stamina that will run out if left in battle for too long. While the familiar system is clearly a Pokemon knock-off, the battles themselves are a mixture of Grandia and Star Ocean. You can move freely about the battlefield, but you can issue commands as you see fit. It can be an awkward system at first, but you get used to it. One fun thing about the battles is that blue and green orbs called Glims will appear. These will recover energy and magic, respectively. Gold Glims will appear if you perform well in battle, and grant you a chance to obliterate your foe with a mighty special attack.

Ok, fine, that’s great. Sure, catching familiars left to chance is a pain in the proverbial behind, but you can easily get by with your favorites. Sure, controlling your human characters is boring because, aside from a few tricks, they are much weaker than their familiars. My biggest issue with the battles has nothing to do with those annoyances, but there is one thing that knocks the score down a few pegs: the AI. I’m trying to think, as I write this my dear readers, of the last time I had ever shouted at the screen for having crap-awful AI. The first thing that comes to mind is Tales of Phantasia for the Super Nintendo. You know, from the year 1995? When Clinton was in office? When some of you folks reading this were born? It’s bad, and there is not much you can do to improve it. While you control one person to act like a normal, sane warrior trying to save the world, the AI will take over the other two and one of two things will happen: they will waste their MP with powerful attacks or they will waste their MP with healing magic. Healing is fine, but not when I am only missing a few HP! So, the majority of the time, you will want them set to the standard “do nothing” command which means you will be pulling extra weight.

Oliver’s quest will take around 40 hours. If you want to do everything, double that play time. NNK has a lot of content, as expected from a Level 5 title. Unfortunately, more sometimes means less and this is a symptom Level 5 has suffered from before. If you are a fan of RPGs, then you should check out Ni no Kuni: Wrath of the White Witch. The story is easily the best point, with a solid presentation to back it up. There are some labor pains with the battle system, but with enough grinding even the most grueling boss battles will become much more simple. This is a game with some awesome stuff, but the battles might be enough to turn away casual gamers. For this reason, I have a hard time recommending it unless you are a fan of the RPG genre.