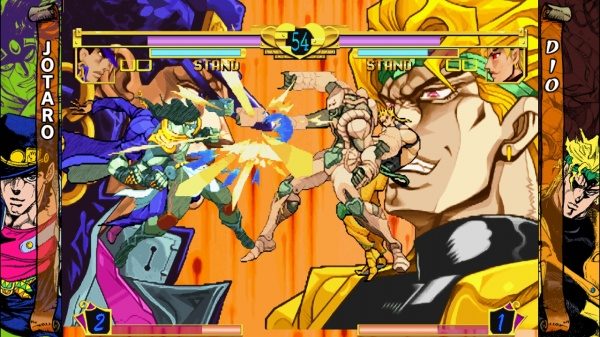 On a rainy afternoon in 1999, a friend of mine asked if I wanted to play a new fighting game with him on his PlayStation. I was in the mood for something different, and the thought of attempting to master another fighting game seemed appealing. He popped JoJo’s Bizarre Adventure into the console and we played a few matches before it was time for me to head home. It was an enjoyable yet forgettable afternoon. Fast forward to 2012, and that same game my friend and I played turns up on the PlayStation Store. This HD version of JoJo’s Bizarre Adventure seemed like a good deal. A few bucks and a few minutes later, I was reminiscing about that fun afternoon all those years ago. Now, it’s 2017. The HD version of JoJo’s Bizarre Adventure has been delisted. Just my luck: I’m finally enjoying the game and won’t be able to play with anyone. JoJo’s Bizarre Adventure is a fun, 2D fighting game that has Capcom’s mechanics combined with Hirohiko Araki’s artistry. If, in some way you are able to access it, I hope you take the time to play it.

It wasn’t until I started replaying this HD version of JoJo’s Bizarre Adventure that I realized that the game takes place during the third arc of the series. Known as Stardust Crusaders, the story focuses on Jotaro Kujo. Jotaro locked himself in a jail cell because he thinks he’s possessed by an evil spirit. The spirit turns out to be a Stand, which is a personification of supernatural power that can take a certain shape. In Jotaro’s case, his Stand takes the form of a powerful warrior that looks like a mixture of pro wrestler and a superhero. Jotaro’s grandfather convinces him to use his Stand’s abilities to defeat another Stand user named Dio, who is hellbent on taking over the world. It’s a classic story that works well in a fighting game. Each character has their own story in the single player campaign. While you’ll get more information from each character from the manga or the anime, the game does a great job at revealing a fair amount of information for each character.

JoJo’s Bizarre Adventure plays like other 2D fighters, but it has certain features that help it stand (bad pun, I know) apart from the competition. First, there is a hefty roster of characters. No matter your experience with fighting games, chances are you will find someone who works with your fighting style. Characters can execute light, medium and strong attacks. With certain button combinations, you can execute flashy special moves. Both the regular attacks and the specials can be used to create combos. Pressing the Stand button will unleash your character’s Stand, which increases their power, allows for a double-jump and more. Of course, if the Stand takes too much damage, then user suffers a Stand Break. This causes them to be momentarily stunned and highly susceptible to damage. Characters like Avdol and Polnareff have Stands that project personae, just like Jotaro. Then, you have characters like Hol Horse who’s Stand is a gun, or Mahrahia who’s Stand places electromagnetic traps. As you go head to head or Stand to Stand against an opponent, a Super Meter fills up that lets you unleash even more flashy attacks. The round ends when one opponent’s health meter is depleted. Depending on the type of attack used as the finisher, the screen will show a manga-styled shot of the defeated looking completely wrecked. It’s a great touch to an already fun and fluid game.

Unfortunately, JoJo’s Bizarre Adventure may not have enough to satisfy those looking for something beyond single player campaigns. Finishing Story Mode with a character is fun, but aside from this, the only other modes available are two-player and training. It would have been nice to have seen an extra type of mode thrown into this version. Furthermore, since the game has been delisted, there is a very small of chance of you ever being able to play the game online. Couch play will still work, but those that wish to play with someone beyond their living room won’t be able to do so.

It’s a real shame, too. Watching such creative characters fight one another in 2D with an HD upgrade is glorious. There are detailed battlefields, wonderful character portraits, some entertaining special attacks, and a roster that is both bizarrely and beautiful. Fans of the manga will appreciate little details such as Jotaro’s hand in his pocket or Joseph’s running animation. Catchy music that befits an anime set in the 1980’s helps compliment each stage and scenario. The game is entirely voiced in Japanese.

Since JoJo’s Bizarre Adventure HD is a fighting game, your play time will vary. Multiple difficulty and round options let you set the game up as you see fit if you want to complete everyone’s unique story in as little time as possible. I think it’s a damn shame that I took so long to truly dive into this game, and that this series doesn’t have the level of popularity it deserves. Those interested in the long history JoJo’s Bizarre Adventure will enjoy starting with this 2D fighter. Since the game has been delisted, you can attempt to find it on the PlayStation or the Dreamcast. As for me, I’m going to continue to hope that someone out there will find the ability to play against me while I continue to enjoy this underrated fighter.

Overall, 7.5/10: While scarce in terms of play modes, JoJo’s Bizarre Adventure HD is a great fighter for any type of gamer.