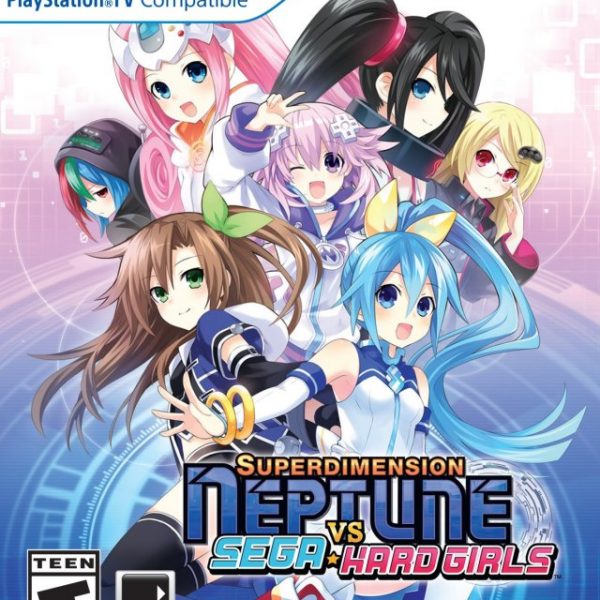 The Neptunia series is proving to be a stubborn contender in today’s RPG market. Every time I think they’re done, they come out with a new game that not only improves on their original formulas, but manages to add new humor and esoteric references that gamers of all ages can appreciate. The recent spin-off, Superdimension Neptune VS Sega Hard Girls continues this trend. There is an improved battle system. There are copious video game references, most of which revolves around Sega consoles. There is a silly plot with plenty of humor. It’s all there and, much to my surprise, it all works.

Taking center stage in this iteration of the Neptunia series is IF aka Iffy. With her trusty motorcycle, Iffy loves to go on adventures to distant lands and discover hidden treasures. Her most recent journey takes her to the Grand Library. While on the way, she sees a young girl falling from the sky. With no recollection of who she is, Iffy and this stranger finally make it to the library where they meet a being named Histoire. The adorable Histoire informs Iffy that the world’s history is being altered by a menace known as the Time Eater. It’s up to Iffy and her rescued stranger, Segami, to put a stop to history’s alteration. They will need to travel through various time periods in order to accomplish this goal. It’s within these eras that Iffy will see familiar characters like Neptune and Nepgear, as well as the Sega Hard Girls. The Sega Hard Girls are personifications of some of Sega’s most cherished systems. Seeing these girls all interact with one another is great. As usual, the writing is on point. The story itself is shallow and predictable, but watching a huge cast of hilarious ladies chat amongst themselves makes up for it.

SHG plays like most games in the Neptunia series. If you’re familiar with games as early as Mk II, then you will feel right at home. You navigate a cursor to select folks to chat with, shops, and destinations. Events usually involve two characters on the screen chatting back and forth; a Compile Heart standard. Dungeons are where the fun lies. Iffy is a nimble gal. She can dash, climb, crawl and jump around the various dungeons. While there are more invisible walls than I cared for, it’s fun seeing Iffy navigate these dungeons. Of course, enemies are all over the place. Iffy can strike with her claw-weapon to start a battle with an initiative. If the enemy runs into you, things begin as normal. If you miss your strike or an enemy reaches you from the back, then they get to go first.

Battles have a familiar look to most games in the series. You can have up to four characters in battle with special formations that grant bonuses. One nifty feature is that multi-colored gems appear throughout the battlefield. Gathering these will help recover lost HP or SP. When a character’s turn begins, you have control over their movement. Performing actions causes a meter to go from blue to green to red. You can perform as many actions as your character’s meter allows, but when the color turns red the turn ends. Furthermore, ending a turn in a red zone leaves the character vulnerable. Holding the attack button will charge a powerful attack that uses the entire turn, but also deals considerable damage. The battles are quick, but there is a fun level of strategy to them. As usual, many of the characters are able to transform. This provides upgraded stats. Finally, as damage continues to get dished out to enemies, you can access Fever Time. This increases everyone’s powers and freezes the enemies. Aside from a few boss battles, the game has an easy level of challenge thanks to all that you can do.

Iffy and the ladies look great on the PS Vita. This portable doesn’t get enough love, so seeing it display colorful and vibrant 3D anime models and worlds helps its cause. As expected, there are some truly over the top special attacks that deal piles of damage and have enjoyable results. The music is a disappointment since the majority of the songs came from previous games in the series. Luckily, the high quality voice (Japanese or English) acting overshadows it. Overall, SHG is a great game for the ears and eyes.

While there are multiple endings and tons of bonuses to discover, finishing Superdimension Neptune VS Sega Hard Girls doesn’t take long. I was able to get both endings in about 15 hours. As per usual, there are some trophies that will require heavy grinding in order to earn a coveted platinum trophy. While I have no intention of going for the platinum, my guess is that it could take close to 40 hours for it. I really enjoyed watching Iffy take center stage. It’s not perfect, but her time in the spotlight will be enjoyable to all fans of the “Nepverse.”

Overall, 7/10: Superdimension Neptune VS Sega Hard Girls won’t bring in new fans to the Neptunia universe, but the ones that already exist will enjoy all it offers.