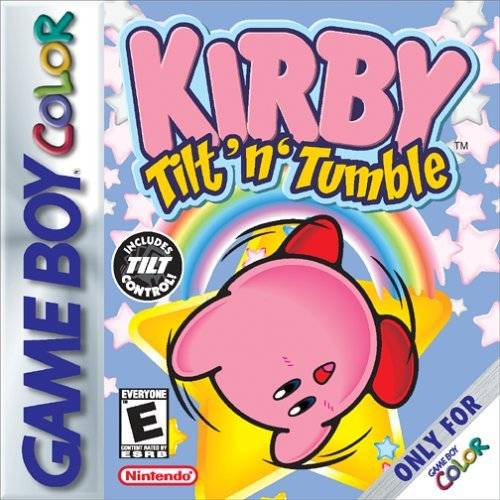 I’m confident enough in my masculinity to say that pink is one of my favorite colors. It’s fitting that my favorite Nintendo mascot just so happens to be this color. Kirby’s pink puffiness has only one title on the Game Boy Color called Kirby Tilt ‘n’ Tumble. Known as Koro Koro Kirby in Japan, this is another game that proves to me that Kirby is the Nintendo guinea pig. Instead of testing Nintendo’s new ideas on other mascots, Kirby has once again found himself in a bizarre, non-traditional world. Tilt ‘n’ Tumble is a game takes a patience and practice; some people might not have the energy to put into it. However, there is something addictive about Tilt ‘n’ Tumble that will keep others (myself included) coming to its punishing fun. Also, the cartridge is pink. I think that’s one good reason to give the game a passing glance.

Welcome to Pop Star. It’s a very peaceful place. Kirby is taking a nap, but is abruptly woken up by a Waddle Dee and King Dedede. Both of these mischief makers are carrying odd objects towards Dedede’s castle. Kirby is on the scene; ready to investigate. Ultimately, Kirby learns that he needs to collect missing stars in order to make his world a peaceful place again. As is typical with Kirby, the story in Kirby Tilt ‘n’ Tumble is just an excuse for this precious protagonist to take center stage.

Speaking of the stage, Kirby Tilt ‘n’ Tumble is a type of game that is in a genre all of its own because it’s part adventure, part platformer, and part puzzler. Remember when I mentioned the cartridge’s pink color? It’s a unique feature to be sure, but that’s not the only unique thing about it. Kirby Tilt ‘n’ Tumble has a built-in accelerometer, which is what allows you to control Kirby. There is no running, sliding or swimming. There is no inhaling, floating or spitting out a puff ball. There is no swallowing an enemy and earning their copy ability. Instead, Kirby has turned himself into a ball that moves in the direction you tilt your Game Boy Color. By keeping the system flat, Kirby will remain still. The more you tilt, the more Kirby will tumble. With a flick of the system, Kirby will jump. Playing Kirby Tilt ‘n’ Tumble in public will obviously draw some odd glances your way, but it doesn’t matter what other people think, am I right? All stages have enemies to smack, stars to collect and plenty of bonuses to discover. Most importantly, there are Blue and Red Stars. Blue Stars let you participate in a mini-game. Red Stars let you achieve hidden secrets. Finally, each main area ends with a boss fight.

If you haven’t guessed, Kirby Tilt ‘n’ Tumble’s gimmicks are as frustrating or fun as they sound. Levels are filled with enemies and hazards that will damage Kirby. There will be times when bottomless pits fill nearly every corner of a level and the only way to overcome these is to precisely jump on moving platforms. Bosses require varying levels of strategy. Each stage has a time limit that will mercilessly count down. Worst of all, Kirby can only sustain a few hits before losing a life. Mastering the velocity and height of Kirby’s rolls and jumps from the built-in accelerometer is essential. The first couple of stages give you some wiggle room, but once those end, the training wheels come off and you need to get ready to buckle down. Despite failing so many times, I always seem to come back for more punishment in Tilt ‘n’ Tumble. Sometimes, I feel that the failures are my own fault. I either get too arrogant or I decide to propel Kirby like he’s a stunt double. Other times, the controls feel too sensitive and the need to keep the Game Boy Color flat makes it so overhead lighting doesn’t do well in seeing what the “puff” is going on. The same problem applies if you play the game on a standard Game Boy Advance. Playing the game on the Game Boy Advance SP causes the controls to be reversed. Either way, my masochism takes over and causes me to never give up until I get all of the collectibles and reach the end of a stage.

Kirby Tilt ‘n’ Tumble looks wonderful, especially with the limited capabilities of the Game Boy Color taken into consideration. The areas are varied and vibrant, and the characters move well. The novelty of watching Kirby rolling around the floor will fade after a couple of stages, but it’s a visual treat at first. The music is catchy and it will be tricky to not tap your feet along with the music due to the risk of losing control of Kirby. Some of Kirby’s vocal quips made it into the game, too. While the voice acting is limited, it’s a nice touch and hearing Kirby’s voice come out of the Game Boy Color adds to the game’s charm. The Game Boy Color can’t do much so I am pleased with seeing all it managed to do with Kirby’s only title on it.

Kirby Tilt ‘n’ Tumble has plenty of reasons to play time and time again. There are secrets to unlock and mini-games to play. Replaying old levels to achieve the best times and trying to get the most points adds more fun. Usually when I review a game, I tell the reader to avoid it entirely or get out and purchase it ASAP. With Tilt ‘n’ Tumble, I am not sure what to say since the gimmicks will create a variety of opinions. For me, there are times I praise them and times I curse them. This is not a traditional Kirby game in the slightest. I’m glad to see Kirby get a title on the Game Boy Color, but I wish he was able to get something traditional. That’s probably my biggest problem with this game. Despite this major gripe, I think there is something special about Tilt ‘n’ Tumble that no other Game Boy Color game offers. Obviously, there aren’t any other GBC carts that are pink and there are only a few that make use of an accelerometer, but seeing Kirby perform some impressive stunts by simply tilting and flicking the Game Boy Color makes an interesting delight. Kirby Tilt ‘n’ Tumble might lack typical Kirby-isms, but it will still satisfy some Game Boy Color owners that enjoy this adorable mascot.

Overall, 7/10: Kirby Tilt ‘n’ Tumble will either roll over your soul or roll into your heart. It all depends on your level of skill, patience and practice.