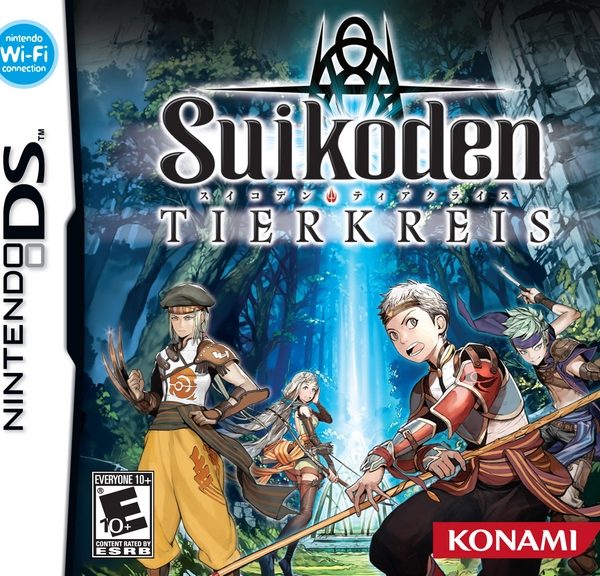 Author’s Note: This review was originally published on June 4th, 2009. Aside from the “witty” taglines, I feel that I should point out that I gave Suikoden and Suikoden II a proper chance many years after playing Teirkreis. I’m glad I did.

Hmm. Where to begin with this one. Alright, I’ll just throw it out there: a Suikoden game was played by me yet again. Despite my gripes about Suikodens I, II, III, IV, and Tactics, I gave the DS edition a try. I’m not sure why, to be quite honest. Sure, I knew I was going on a trip and needed to find a game that would occupy my time, but with the huge RPG library on the DS, why did I go with this one? Hard to say, but I did. Much to my surprise, Suikoden Tierkreis was far better than the other games in the series I played. But, it was a Suikoden title and as per usual, it began to ware on me with its infamous redundancy and battles.

Land Ho!
Suikoden Tierkreis is the story of a character you name and his friends living in a small village. One day, the elder tells them to go hunting. During their hunt, they encounter a mysterious book that gives them magic powers. Also, the book shows the little scamps a vision of a battle fought long ago. Finally, masses of land are appearing out of thin air. Just what the heck is going on? Little do these children know that this book will involve them in a quest with a diabolical king and his religious cult: The Order of the One True Way.

The typical Suikoden story formula was tossed aside with this whimsical, anime inspired tale. Wars, famine, and rival nations are nowhere to be found. The change of pace was nice, but the characters in the story were way too over the top for my liking. In fact, the main character has a knack for constantly saying, “We’ll never know unless we try!” That statement is annoying enough by itself, but for someone to actually say it? Yeah, not good. There were some interesting plot concepts and ideas in Tierkreis, but the characters should have been toned down. It is good to have enthusiasm when saving the world, but seriously, ease up a bit.

Enter The Ugly.
Suikoden Tierkreis has graphics that are a mixed bag. The environments and the anime cut scenes were lovely. The fun stops there, because the character models and the monster models were bizarre and disfigured. Taking a page from the DS version of Final Fantasy IV and the PS2 title Romancing Saga: Minstrel Song, the characters look goofy as hell. The same can be said about the monsters. In battle, the skills and attacks lack the wow factor of other games. This area definitely needed a touch of improvement.

Just Shut Up!
Remember that statement, “We’ll never know unless we try!” that the hero incessantly says? Well, often times it is voiced. Actually, most of the characters are voiced. From what I could tell, there was no way to turn off the voices. Plus, everyone speaks as though they have Red Bull flowing in them instead of blood. Or speed. Or sugar. Anyways, you get the idea; they speak fast. The voice acting is awful for various reasons, but the biggest one being the speed of the speech. The music was a bit better, but nothing memorable.

Suikoden IV Person Party.
One of the things that I do enjoy about the Suikoden series is that you can recruit 108 characters. While most of them are just there to take up space, they allow you to build your favorite battle party of six. Unfortunately, Suikoden Tierkreis takes the Suikoden IV approach and gives you only four slots. Technically, Tierkreis gives you four battle spots plus one spot for a supporting character, but it is a real bummer being unable to have six characters in at a time. As you recruit the 108 Stars of Destiny, you will travel through towns and dungeons. In towns, you can buy equipment and items. Unlike other Suikoden titles, you can give your characters nearly any weapon and piece of armor you want instead of them being able to upgrade their favorite weapon. With the magic system, you can equip your favorite four spells and skills. Inns allow you to recover, and a trade shop will give you money for monster parts. Finally, you will end up building your own home base where your 108 Stars of Destiny reside. When you’re done milling about in an area sans monsters, you will head off to a dungeon.

It should be noted that the bottom screen and stylus can be used to play the entire game, and it is recommended that you do so. This makes dealing with the menus much less cumbersome. It also makes battles go by quicker. Battles occur at random. Most of them are over in a matter of seconds thanks to a fabulous auto battle command. Boss battles require a bit more strategy. By this I mean you have to pick a magic attack to use instead of just having everyone go full force with regular attacks. Clearly, this game is ridiculously easy. Not that it’s a bad thing, but there is zero challenge. The only challenge I found was, you guessed it, sticking with it. Like the other titles in the game, I got to a point where I said, “Ugh. I cannot do this anymore.”

Surprise Surprise…
Suikoden Tierkreis was surprising. It had a different type of story and effortless, quick battles. Unfortunately, part of the surprise was not so good. The character models, the voice acting, and the overall atmosphere of it came together to create something unappealing. I did not care much for this game, and what is interesting is that I doubt die-hard Suikoden fans will care for it due to it straying away from the typical Suikoden formula. Those who don’t mind shoddy presentation, but are looking for a back-to-basics may be pleasantly surprised. Me? I never liked surprises in the first place.