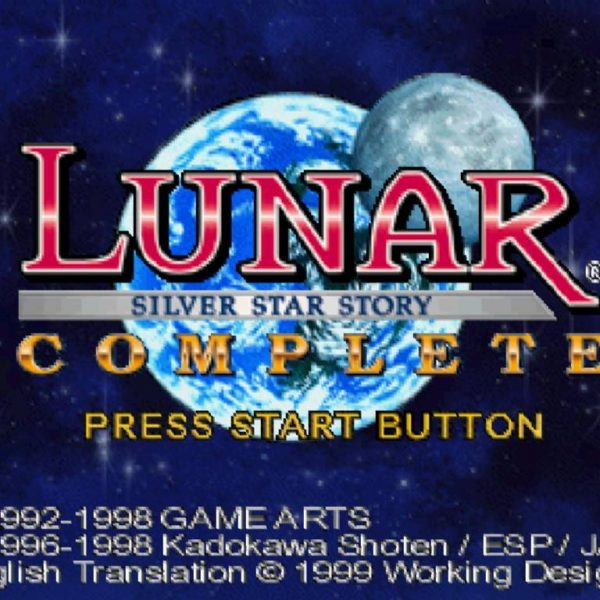 Author’s Note: This review was originally published on March 10th, 2008. I remember waiting for class to start, so to kill time, I wrote this. Like other reviews of the time, this one features “witty” taglines to separate each section.

Looking back on it, I never had a reason to look forward to the release of LUNAR: Silver Star Story Complete. I never had a reason to get so ticked off every time Working Designs made another delay. I never had a reason to shell out an insane amount of money for buying the game as new. The game was not bad, but it was hyped up in a Chrono Cross-esque fashion. I enjoyed the game, yet it seemed as though I was forcing myself to finish it near the end. While it has been a few years since I last popped in this remade Sega CD title, I remember the game well and feel it is time to give readers some input.

Adventurous Alex.
This story begins in the quiet town of Burg. Alex, a scrappy young man with big dreams wishes to be just like his hero, the legendary Dyne. One day, while Alex and his talking, flying cat Nall are staring at Dyne’s shrine, Alex’s best friend Ramus arrives with big news. Apparently, the warm spring weather has caused the snow to melt in nearby cave that holds endless treasure. Alex, Ramus, Nall, and the love of Alex’s life, Luna decide to go to the cave. Will this little trip be the one that begins Alex’s grand adventure?

The story is so predictable, you will probably be able to figure out what is going to happen hours before it actually does. I did not mind this, especially considering this is a remade game that has a few updates, but the same story. Perhaps during the age of the Sega CD, LUNAR was an epic tale. Regardless, the story is not entirely exciting. However, one thing that was updated for this game was character development. Alex and his friends have a crap-load of stuff to say. The same can be said for all of the NPCs you encounter. Every time a new story event happens, the entire cast of townsfolk from all over the world will change what they say. By talking to them more than once, you will learn so many things about anyone and everyone in the world of LUNAR. At times, I often felt overwhelmed because I had to see what everyone had to say! It is not required that you go back and speak to everyone, although doing so at times will net you items. A dry story is saved by awesome character development.

Crack that Whip!
I have to say, walking around towns with your entire party following you close by makes for one awesome game of crack the whip. That aside, you can do very basic things in the towns. Each town has a statue of the worshiped goddess, Althena. Examining this will fully restore your HP and MP. Who needs an inn when you can just look at a statue? Besides the aforementioned townsfolk, there are shops that allow you to pick up items and equipment. Other than that, walking around towns is nothing exciting. Go to place A, talk to person B, and get item C to advance the story and move right along.

Swing that Sword!
In a dungeon, enemies will appear on screen. This means that there are no random battles. When an enemy spots you, it will give chase, but Alex is a swift walker and you can easily get away from most enemies. When you do decide to fight, you are treated to a very basic battle system.

Each of your party members can attack, use a special magic attack or spell only accessible to them, use items, or defend. Nash is able to attack from afar with his bow and arrow, whereas the rest of the team has short-ranged weapons. When you do decide to attack, the distance between you and an enemy comes into play. Each character has a certain amount of range, and if your target is too far away your character will waste a turn. This little annoyance hardly happened to me, but it did cause trouble when it did happen. Designated fighters like Alex and Kyle can attack more than once when their level reaches a certain point. This bonus is a life-saver in certain situations. Jessica acts as your healer of the group, but she also packs a punch. Finally, Mia has a plethora of attack and support magic. Each character has little room for usage outside of their designated roles. This may upset those looking for customization.

Battles can range from very easy to very difficult. Near the end of the game, monsters have too much energy. Sure, you could use your most powerful attacks, but that would cause you to waste your magic powers for an upcoming boss battle. Boss battles in this game take an interesting turn. Each boss has a base number for their statistics. Then, the game will take Alex’s level and multiply each base by that number. This will be the level of the foe you face. Like the random battles, the boss fights can be very easy or very difficult. Unfortunately, all methods of taking down the foes are the same: boost your stats, attack, heal, and repeat until the monster is out of energy. Those looking for a game packed with strategy should look elsewhere.

Animation Nation!
New to the Playstation remake of LUNAR is nearly an hour of awesome anime sequences that help advance the story. These were beautifully done. The character sprites may leave a bit to be desired due to them being 2D and lacking any body language, but they get the job done. In battle, spells and skills shine as you face off against foes ranging from a boring slime to a living statue. In the end, the graphics do their job.

A Song to Sing.
One of the themes that revolve around the main LUNAR plot is that of music. Thus, the music for the game should be exceptional. For the most part it is, but the town music and battle music could use a bit of spice. The music that plays during the movies was done very well. Another interesting thing to mention is that much of the game is fully-voiced. The acting for some of the characters could use some work, but the rest of them do a fine job of giving the characters more flavor. For the most part, the music does the job.

What a Package!
If you are able to find the game brand new, you will get some extras. Besides the game, you will get the “Making of Lunar” CD. This interesting disc contains interviews and extras for your viewing pleasure, and the arduous task of working for Working Designs. You will also get a soundtrack to the game, but the bad thing about this is that the WD studio tampered with the songs. They start off as they do in the game, but at the end they were remixed, revamped, and reworked to sound terrible. Finally, the instruction manual comes in a leather bound cover and is full of interviews and glossy pages.

A One Time Ride.
The remade LUNAR lasted me about 30 to 40 hours. There are a few extra things to do, but that will hardly add to the final play time. I recommend LUNAR to those who enjoy their old school games. Back when I played it, I was the kind of guy who enjoyed games like LUNAR; games that are basic, have a basic story, have a basic battle system, and are basic graphically and musically. Nowadays, a game of this nature would put me to sleep. There is no customization, and hardly any reason to replay the game a second time. Working Designs hyped up this game more than it was worth. Sure, the game had some shining moments, but it was not the fabulous package that Working Designs claimed. This is especially true considering the countless delays. This, along with future games (and reviews) was what led to the company’s ultimate demise.