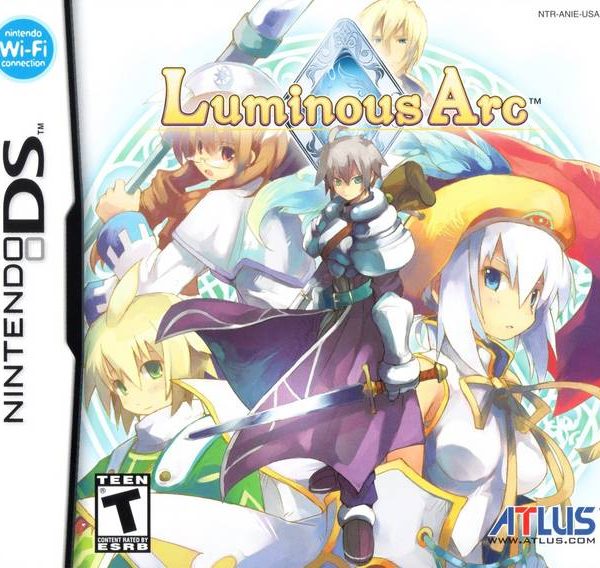 Author’s Note: This review was originally published on December 29th, 2007. Like other reviews around the time, I used “witty” taglines to separate the various sections.

I am perfectly capable of enjoying Final Fantasy Tactics as well as Luminous Arc. This is because I can play games with an open mind.

A Tale of Witches and Warriors.
In the world of Aldheld, a battle between witches and the humans took place 1000 years ago. With the new age approaching, the Eurus Knights and the Zephyroth Knights act as the holy protectors of the world. Their home is the Luminous Church, where the word of the Luminous religion has spread throughout the land.

As of late, attacks from monsters lead people to believe that the witches may have returned. It is up to the members of the Ever Garden, an elite group of young soldiers, to investigate matters and see if the witches are back for another battle. One of these Garden Children is Alph, a boy dreaming of becoming a mighty warrior like the Ever Garden’s leader, the Arc Knight Heath. Alph and his friends have their work cut out for them as they uncover the truth behind the recent attacks, as well as the truth behind the Luminous Church.

The story of Luminous Arc was a bit predictable. From the start of the game, you will probably realize that certain people are not to be trusted, and that certain people are not as bad as they seem. Luminous Arc uses many familiar story ideas found in various RPGs. While this may come as a downer to some, the characters in the tale make up for it. Unlike some SRPGs, all of the playable characters have some relevance to the story. So, instead of hiring mercenaries that have no background at all, you have a huge cast of fun, creative, and colorful characters that each grow in their own way as the story progresses. While the story is a bit unoriginal, the characters are not.

A Flash of Luminous Light!
A strategy RPG through and through, Luminous Arc has some new features never seen before in the genre, as well as some mechanics you have seen before. At the start of a battle, you will be able to chose up to eight characters. When the battle starts, the turn order of all the members on the battle field gets determined by the Active Turn System. Units with the highest MOVE statistic get priority, and they get their turns first. The higher the number, the more turns the unit will get. However, there are ways to increase the number of turns for your other units. You can move, and not act or act, but not move in order to make a certain character’s turn come quicker. This system is similar to the RAP system found in Hoshigami, or the AP system found in Stella Deus.

When one of your characters gets a chance to act, they have a variety of things they can do. All of the characters can attack and use items. Some of your team members can cast magic, some have access to their own set of unique skills, and some can do both. This variety makes the game a pleasure to play, as it allows you to form the perfect party, without having to deal with the cost of buying mercenaries. All of the characters in the game can execute powerful skills called Flash Drives. As they perform in combat, they will build up Flash Points and the most they can have is three. Flash Drives are powerful blows that not only deal high damage, they also can inflict a negative status ailment on the foes hit by them. Some of the Flash Drives can heal your team. Building up FP can be a bit troublesome at times, but there are certain items that can be used to increase the number quickly.

Finally, when certain characters have their FP full and they are near each other, they can execute the most powerful type of attack: Synergy. These are difficult to get set up, but the damage dealt is well worth it. All Synergies are attacks and can cover a huge amount of area. Unlike Flash Drives, skills, and magic that become usable after gaining levels, the Synergy attacks are learned via story progression.

The rest of the battle system in Luminous Arc should be familiar to you if you have played an SRPG. Characters move from square to square on an isometric field where terrain effects certain aspects of the actions taken. Also, gaining 100 experience points grants you a level up and full recovery of your HP and MP. Attacking enemies of higher level than you allows you to gain more EXP. An unfortunate aspect of the leveling system is that using support magic on people other than the user grants 30 experience points. This allows for very easy level building, and the game is on the easy side. Some of the battle fields might give you some trouble if you forget to equip certain things, but for the most part, the battles are cake. In fact, using your most powerful Flash Drives and the Synergy attacks becomes nothing more than a thought due to the foes being dead before you get the chance to execute them. However, the battles are still fun. There are a total of 15 characters that you can use, each of which has their own strengths, weaknesses, and abilities. With new ideas for the SRPG genre combined with the classic ideas, Luminous Arc has fun battles.

Bittersweet Intermissions.
After a battle, whether or not it is random or from the story, you get to go into intermissions with one of the characters who participated in the battle. The character will talk to you about something, and then you have to chose one of three responses. If you chose the right one, the character will grow more and more fond of you. The level of fondness is indicated by Philia Points, which is a fancy way of saying a heart icon next to the character’s portrait. As the heart fills, you gain items. When the heart is maxed out, you get a bunch of special items, as well as a special conversation between Alph and that character. In battle, Alph will earn certain bonuses when he stands near a character whom he has a good relationship with.This was a neat idea, but there were problems with the intermissions.

First, there are only ten conversations that you can have with a character. This means that you may not be able to fill the heart fully on your first play through. When the heart turns blue, you cannot talk to the character in intermission any longer and have to wait until the next game. My second problem comes with the fact that this was one of the main methods of character development. The story does a decent job of revealing certain things about each character, but the intermissions go into greater detail. While I enjoyed learning more and more about the characters, intermissions came off as a bit forced.

Besides these conversations, there are other things you can do before heading into battle. In town, you can speak with your friends or the locals to learn about the stuff that is going on.Each character has their own unique weapon that you can buy from the shop in town. You can also purchase armor, items, and accessories. The equipment you find can be taken to a shop in a certain village and get upgraded with items called Vitae. First, you need to identify the Vitae. When that is done, you can imbue it into your equipment. You have to imbue two Vitae together, and the effects from this process are usually well worth it. There are plenty of Vitae to find throughout the game, and customizing your equipment with these stones adds a good amount of variety to the game play.

Looking at Lucidity.
The DS serves Luminous Arc very well. After the opening anime scene, the game shows off gorgeous graphics on the dual screen portable. The 2D character sprites are detailed and crisp in battle, and their attacks look great. During a conversation, you get treated to full sized portraits of the characters talking. Depending on the mood, their portraits change. While these are beautiful, it is a very dry way of story advancement. The sprites looked good on the battlefield, thus they should have been used in certain story events. Another issue is that there was room for more anime scenes, but they only had one as an introduction and one that is shown at the end of the game. For the most part, the graphics look great, but their fullest potential was not realized.

Voices of the Ever Garden.
In most of the conversations, and in all of the battles, the characters speak. Some of the performers did a great job at giving their character more personality. Others, on the other hand, made me want to turn the volume all the way down. The language they use sounds as though they are living in our world, in our time, but that is clearly not the case. As far as I can tell, there was no way to turn the voice acting off. However, for the most part, the voice acting was done well. The same can be said for the sound effects, such as crashing lightning, burning flames, and slashing swords.

An Extra 25.
The game has 25 chapters, which means 25 story battles. There are a few side quests tossed into the game, as well as areas that allow you to enter random battles for further training. Going through all ten intermissions with all of the characters will add extra game time, as will imbuing the best Vitae on your weapons. Still, after I was done doing the stuff I just mentioned, I clocked in about 30 hours. Luckily, there is a New Game+ that allows you to retain all of your levels, items, and Philia Points. You also get to see all of the character art, conversations, and profiles you uncovered. Finally, you can go into the Extra Dungeon where all of your strategy wits will be tested, allegedly. I have yet to go to this dungeon yet. As an added bonus, those who enjoy multi player can play over Wi-Fi.

Luminous Fun.
Obviously, Luminous Arc was not perfect. However, it was fun. Final Fantasy Tactics was also fun. See, instead of comparing the two non-perfect games, I am clearly able to play titles with no expectations. There were things in Luminous Arc that should have been fixed, and certain things that should have been removed. Doing this would have made Luminous Arc better, but what I got was a charming, enjoyable SRPG that brought new ideas to the genre. If you like SRPGs, and realize that the pinnacle SRPG is NOT Final Fantasy Tactics, then you will enjoy all Luminous Arc has to offer from start to finish.