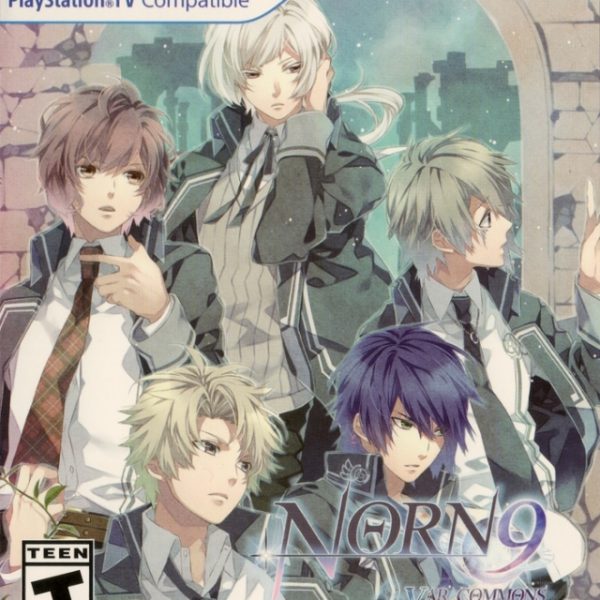 Cover art is important when it comes to video games. If not for something eye-catching, I would have completely avoided certain titles. Of course, there are games in which the cover art is the game’s only redeemable aspect. But, that’s another review for another time. My point is that the cover art in Norn9: Var Commons is beautiful. After seeing it, I wanted to learn more. Norn9: Var Commons is an otome style game. I don’t have much interest in this niche genre, but I decided to step outside my comfort zone and give the game a try. I’m glad I did. Norn9: Var Commons has a unique premise and cast that all fans of otome will enjoy. If you’re not a fan of otome, then continue to read and decide if other features in Norn9: Var Commons will be enough to draw you in.

Obviously, the driving point for Norn9: Var Commons is its story. It starts in present day Japan. A child prodigy named Sorata Suzuhara is in the middle of receiving an award for his scholastic achievements. As he expresses his disinterest in it, he starts to hear a song. No one is able to identify its source, but through its power, this song transports Sorata to the past. Now in the Taisho era, Sorata meets a young girl with pink hair and a chipper personality. She suggests that the two of them hop on The Norn, a massive ship that is taking other youths to an unknown destination. The Norn is guided by an entity known as The World; none of the passengers know what’s in store. Furthermore, the pink-haired lass and the rest of the passengers have the ability to use powers unlike anything Sorata has ever seen. Sorata has no choice but to go with the flow aboard The Norn.

The story has a good start. Despite the ancient setting, The Norn looks like it came from the future. Despite this song whisking Sorata away, it becomes the least of his concerns when he gets engrossed in all of the drama on the ship. And, that’s just the beginning. After you finish this introduction, you get to take control of one of three heroines. The first is the aforementioned pink-haired girl, Koharu. Koharu has the ability to control fire and feels like its her destiny to be on The Norn. The next is Mikoto Kuga, a stern and headstrong girl with black hair and the ability to create barriers. Finally, there is Nanami Shiranui. Coming from a lineage of ninja, Nanami has the ability to erase people’s memories. As you take the role of these three heroines, you will meet nine, handsome men. Due to certain story events, the heroine you select will have to pair with one of the men. This provides the general premise for the game’s multiple routes you can take. No two routes are the same. For instance, the path Nanami takes with Kei will be different from the path she takes with Ron. With so many options, Norn9: Var Commons can last you a long time.

Since this is a visual novel, the majority of your time will be spent reading well-written dialogue and going through the story. During certain points, you will be offered a dialogue choice. Depending on what you say, you can increase your affection level with the current partner. Ultimately, this will determine which ending you receive. With the ability to save at any time, perform a quick save, and speed the dialogue along at a lightning-quick pace, it’s easy to figure out the proper choices on your own. On the other hand, some of the depressing endings are worth seeing. The story in Norn9: Var Commons is its best feature. What I like most about it is that there are so many choices to make from the start, but things never become so overwhelming that’d you would need to consult a guide. The major downside to the story is that there are scenarios that feel like they never completely take off. They have strong potential, but their endings can feel underwhelming or contrived.

Going back to my initial paragraph regarding the game’s cover art, the presentation in Norn9: Var Commons is worth mentioning. The character art is gorgeous. Every character has a unique look and portrays multiple expressions. Each scenario features art stills that further drive the situation. Despite the game’s T rating, some of these stills can be suggestive. I would have liked to have seen some animated clips beyond the opening and ending movies, but that’s a minor gripe. Norn9: Var Commons has a fantastic score of music composed by Nobuo Uematsu. The combination of pianos, strings, and woodwinds merge to form a memorable soundtrack. Finally, the game features Japanese voice acting. This was a good choice because the game takes place in Japan.

If you just want to play through the game once, you can finish one scenario in less than a day. For those that wish to see everything, you’re looking at eight to ten hours, depending on how fast you read. If you want to see a special hidden scene, you’ll need to earn the good endings with every guy. Finally, those that wish to hunt for all of the trophies will need to be sure to watch both the good and bad endings in each scenario. Careful use of saves will be enough to get anyone through the game’s trophy list without any trouble. I’m glad that Norn9: Var Commons had such stunning cover art. If it hadn’t, I would have overlooked it and missed the chance to go on such a unique journey. Some aspects of the journey are disappointing, but most of them offer a good read. Fans of all things otome will enjoy uncovering the secrets of The Norn and its nine bachelors. If you’re not a fan, then maybe the same situation will happen to you in which you glance at the cover art, learn more about, and take a ride on The Norn.

Overall, 7.5/10: If you enjoy otome styled games, then you will enjoy Norn9: Var Commons. If you don’t, then perhaps the presentation or the premise will be enough for you to give it a chance.