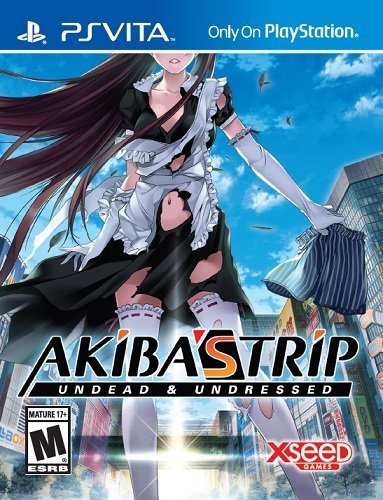 Growing up and living in big cities for the majority of my life, I have come to appreciate each one’s unique scene and style. However, if the Akiharabara represented in Akiba’s Trip: Undead and Undressed is anything like the real thing in Japan, then all of the places I’ve both lived and visited pale in comparison. Akiharabara is a place that looks like it was catered to folks like me and, I’m sure, many of you. There is so much love for all things related to nerd-culture around every corner. Acquire did a great job capturing nearly every aspect of this famed city. However, once you get past all of the flashing lights and fancy cosplayers, you’re left with an unpolished and clumsy game. Akiba’s Trip is a fun title, but those take this strip-trip will need to prepare themselves for some awkwardness.

Akiba’s Trip takes place during our time in Akiharabara, an electric city filled to the brim with manga, anime, video games, computer parts, tasty food, karaoke, and much more. You take control of an ordinary boy named Nanashi that has found himself in an unfortunate circumstance. After signing a contract promising him limited edition figurines, Nanashi ends up strapped to a bed and gets informed that he has become a Synthister: a vampire-like being that needs to feed on the life energy of others. Luckily, Nanashi is saved by a girl named Shizuku. Now it’s up to Nanashi, Shizuku, and their friends to get the bottom of the Synthister problem and save their beloved town of Akiharabara from danger. Akiba’s Trip has an interesting premise. The chance to both explore and save this town from a vampire invasion with a unique roster of characters will appeal to anyone who is a fan of “otaku” culture. The cast of characters is great. XSeed’s localization is spot-on and you’ll get to know and adore each and every personality. Nanashi will often times have to make dialogue choices to advance the story. The right ones can raise the affection levels of one of the many heroines. Ultimately, this will decide which character ending you get. Surprisingly, Akiba’s Trip has a better story than I expected.

Akiba’s Trip has you going on various missions as you get closer to the truth behind the Synthisters, their origins, their intentions and their invasion. During the typical mission, you will head towards a certain section of Akiharabara, witness some dialogue, and then battle a group of Synthisters with one of your female partners. Akiba’s Trip is an action-RPG with an odd concept: pressing the triangle button targets your enemy’s head, pressing the O button targets the enemy’s middle and pressing the X button targets the enemy’s lower body. Nearly all enemies are wearing clothing articles on the above mentioned parts of the body. You need to damage these articles of clothing using a variety of bizarre but fun weapons (tennis racquets, posters, giant kebabs, etc.) and tear them off so their skin is exposed. Just like the mythological vampire, Synthisters will be killed if too much sunlight touches their skin. Before you know it, you’ll be stripping enemy after enemy and watching them vanish in the sun. It can range from entertaining to tedious, depending on a variety of factors. It’s entertaining to strip multiple enemies at once, and then perform a finishing strike that leaves them completely naked. During some missions, it can get tedious seeing it for the eighth time in a matter of seconds. It’s entertaining performing a dual-attack with your current partner, but again, it can just add to the tedium the further you get. Unfortunately, the game’s combat feels clunky when things start to heat up. The biggest issue is the targeting system. Nanashi will auto-target an enemy, which can cause some annoyance in larger groups. Another issue is that the dodge and guard button don’t respond quickly. It’s not that the combat is bad, but it should have more polish because there are some really fun ideas implemented.

Luckily, there are some distractions that can give you a necessary break from the combat. Obviously, you can mix and match your character’s outfits to look as over the top as you like. There are a plethora of a clothes and weapons to collect. Many of these can be purchased in shops. At one point in the story you can unlock a battle arena in order to earn some extra cash. Side-quests become available after a certain point in the story, too. Again, these are used to earn some extra spending money. The money you earn is best spent with the main character’s little sister, Nana. Nana can upgrade your equipment for a fee which can turn your basic weapon or article of clothing into a devastating destruction instrument or impenetrable piece of armor, respectively. Since Akiba’s Trip has multiple difficulty levels and cumbersome combat, having powerful gear makes things much easier.

As mentioned, getting to see Akiharabara through your video game screen is a treat. The Vita version displays neon lights, street signs, flashy advertisements, and the colorful personalities that inhabit this city. The character models move well, but the real fun comes from stripping folks and seeing their exposed skin burn or seeing them run away in shame in nothing but their undergarments. There’s nothing super memorable here (aside from the city itself) but it works. The music is catchy and fits with the city’s setting. There’s electronica, heavy basses, pop beats and plenty of synths. Finally, the game has excellent English and Japanese voice acting options.

Messy mechanics aside, another issue that some might have with Akiba’s Trip is the length. After participating in nearly all side-quests and exploring the city to the fullest, the game can be finished in only ten hours. Luckily, there are multiple endings, difficulty levels and a wonderful New Game Plus option. Thus, those hoping to go for all of the trophies will have a relatively easy time doing so after they’re done adjusting to the combat. Having the ability to quick jump across the map makes things even easier. It will take a certain type of gamer to fully dive into all that Akiba’s Trip offers. However, getting the chance to see a sample of the vibrant city of Akiharabara might just be enough to convince fans of action-RPGs to try it.

Overall, 6.5/10: Akiba’s Trip: Undead and Undressed is a game that is zany, over the top and clever but it suffers from some muddled mechanics.