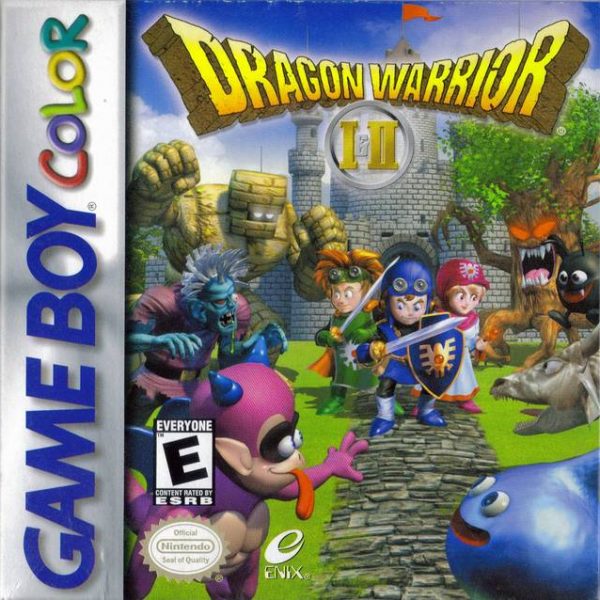 Author’s Note: This review was originally published on October 14th, 2003. I remember saving up my allowance in order to purchase this game. I had it on my radar due to the Game Boy Color lacking good RPGs. Today, Dragon Quest/Warrior is one of the few RPG franchises that I tend to ignore. I have nothing against them; there are just so many other games out there that I’d prefer to play.

Game Boy Color was lacking some good RPGs by the time this came out. I was excited and bought it on the first day. I feel that waiting for Dragon Warrior I and II was good because you get two games at the price of one.

Story: 8/10
There are two stories, due to the fact that there are two games in the cartridge. In the first game, you are a young warrior in the kingdom of Alefgard. As a descendant of Loto, it is up to you stop the evil Draco Lord from terrorizing the world. Also, you need to rescue the princess from his minion’s vile clutches. Dragon Warrior II’s story begins after the first game ended, some years later. You are the prince of Lorasia and just received news that your neighboring kingdom has been destroyed by the evil Hargon. You must find your two cousins from the other good kingdoms and stop Hargon. Both stories, at least for their time, were good. I liked how they continued off eachother. There was nothing too deep, but still they were a lot of fun to play.

Gameplay: 8/10
The first game had very basic game play. Because the main character is the only person who is controlled, he gets all of the armor and weapons to use. There aren’t that many weapons or armor available, which is kind of a downer. You have to buy keys in order to unlock doors, which is both new and annoying at the same time. You can examine dressers, beds, anything. It’s pretty basic.

DWII gives you a party of three, so you have more armor and weapons to work with. Also, your two friends will learn magic so that can be used in the field in order to unlock doors and heal HP. Speaking of doors, there are tons of different locked doors, so you’ll be finding plenty of keys. The exploration is still the same as well. Overall, for an RPG that was released way back when, both games have very easy game play that makes it easy to pick up and play. The menus aren’t complicated and you generally have a good idea of where to go next. There are some tricky things in the game that could make it difficult for some RPG players, but still nothing too bad.

Battles: 5/10
The battles are also easy to learn. They are turn based and pretty basic. In the first game, you fight one on one battles. The main character has strong attack power, attack magic, and healing magic. But don’t think that he’s unstoppable. You’ll need to do some leveling up in order to get through the game. The second DW is similar, except there are a lot more spells, more enemies, and you usually fight three to five enemies at time. The challenge is about the same level for each game. Money can become a problem because new equipment usually is pretty pricey. It gets really difficulty when you have to buy new equipment for three members of your team (DWII). But once again, with enough leveling up the game gets a bit easier.

The thing I don’t like about the battles is that you only see the enemies. You never see your characters (Final Fantasy Legend), but you can see their slashes, spells and the items they use. That has really never appealed to me. You also get into a lot fights, so battles do get repetitive.

Characters: 9/10
I actually think that the characters are good, especially given the fact that the game was made a while ago. There is a lot of history in the game, which makes it really interesting. There is nothing two deep involved, but it’s still pretty good.

Graphics: 10/10
I think that the graphics are great. They are colorful, clear, and nicely detailed. The backgrounds have a lot of color. The character sprites are also very nice. They really used the GBC’s power and made the graphics look really nice.

Music and Sound: 7/10
Average music in this game. Nothing great, nothing terrible…just average. I really don’t recall any of the tracks.

The sounds are…cute. The little slashes and flashes are a lot of fun. But like the sound, nothing sticks in your head.

Replay Value: 10/10, then a 3/10
After you finish the first game, you’ll play the second game. That’ll definitely keep you coming back for more. But once both games have been completed, then that’s about it. There are very little side quests to do or secrets to access. Once through both games is enough.

Difficulty: Medium
It may be easy at first, but just be sure to level up before you get into a new area. The game CAN get hard, especially some of the bosses you fight.

Buy or Rent: Buy
You’ll be playing this game for a long time. Although you may beat one game in a rental period, it won’t be enough to complete the second. I say buy it. It’s pretty cheap.

Dragon Warrior I and II released as one collection for the GBC is a good deal. You can take it on the go, and experience some old school fun. I recommend it to anyone who wants to get started in the RPG genre.