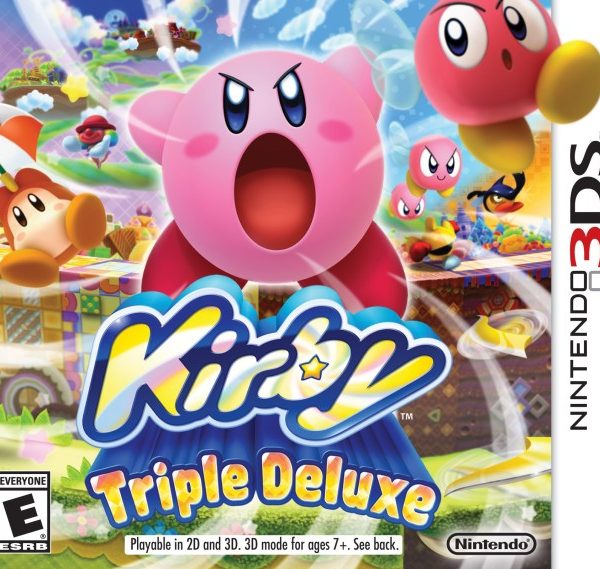 Greetings my fellow citizens of Pop Star! Welcome to another review by yours truly. I am super happy to have gotten the chance to sit down with my favorite Nintendo hero’s latest journey for the 3DS. Ah, the 3DS… you know, when it was first released back in 2011, I thought that the 3DS was the most ridiculous portable to occupy the shelves of game stores. Not only were the launch titles abysmal (Steel Diver anyone? Pilot Wings anyone?) but the console itself didn’t have anything worthy to offer. Street Pass was a haven for swear words, the pedometer didn’t work well and the color choices (bronze or turquoise) were not pleasing. Most importantly, the 3D feature would drain the battery quicker and likely caused a few unhappy consumers eye issues. Of course, time went on and some wonderful games got released. Even better, the system itself slowly started to improve. But, to this day, I never left the 3D feature on for more than a few seconds. Well, at least not until now. Kirby: Triple Deluxe is the first title for the 3DS that didn’t bother my eyes while presented in 3D. I can’t think of a better Nintendo mascot to make full use of the console’s most important feature than Kirby.

Kirby’s first adventure into the third dimension begins in Dream Land. One night, as he slumbers peacefully and adorably, a giant beanstalk grows underneath his house and plops him in a strange land. An equally strange being kidnaps King Dedede and Kirby is the only one who can save him. Much to my surprise, the story has some of the more diabolical villains seen in the series. Their ambitions show a dark nature not really displayed before in a Kirby title. That said, Kirby is the perfect hero to tackle this challenge head on as he travels to six unique worlds that fully take advantage of the 3D environment.

Triple Deluxe plays like any side-scrolling Kirby title. Our puffy and pink protagonist will run, jump, float, slide, fire puff balls and swim through a variety of hazardous levels. In the water, he once again has the ability to fire a water jet to defend himself. He can also dodge and guard against enemy attacks, which will undoubtedly need to get used due to this being one of the more difficult Kirby titles. Luckily, his copy ability is back in full form. By swallowing certain enemies, Kirby can use the abilities of his foes. Many improvements have been made since his last adventure. For instance, the Stone ability now includes an uppercut and an attack that lets you turn into a larger form. With the Sword ability, Kirby can charge a shockwave to his sword and perform a spin strike similar to Link. Personal favorites like Wing and Ninja have returned, too. New abilities are available, too. The Circus ability turns Kirby into an acrobat who tumbles, jumps through flaming hoops and juggles. The Beetle ability turns Kirby into a ferocious rhino beetle that uses his horn to impale and throw enemies. Finally, the adorable Bell ability lets Kirby wield two bills and create musically fun combos with them. All of these and more give Kirby a solid arsenal of abilities to take down new and old enemies. They will be especially helpful against some of the new bosses. These foes may look harmless, but they are out to make sure Kirby does not succeed at his mission.

Fitting for a title called Triple Deluxe, there are three new features make the game unique. The first is when he touches a magical fruit that grants him the Hypernova ability. This ability lets Kirby inhale everything in his path. This is mainly used to fight mini-bosses and solve puzzles. The next feature is that certain obstacles and stages will require the use of the built-in gyroscope. Personally, I didn’t care for using it because it had a tendency to interrupt the flow of the game. The final feature is that Kirby will find Warp Stars that let him move from the background or foreground. This is where the 3D feature really shines because enemies and obstacles will attack from either location. Watching giant hands or spiked pillars emerge in 3D looks amazing. I highly recommend playing the game in 3D just for the effects alone. Of course, you’ll also get to see Kirby’s darling face, too. As expected, Triple Deluxe is a cute and carefree looking game with a huge variety of colors and textures. The soundtrack includes some new and old tunes that fit well with the game.

With new abilities and a new look, Kirby: Triple Deluxe has a good amount of content to offer. For those who want to obtain 100%, you will have to do more than just conquer the final boss. For starters, you will need to find the 100 Sun Stones scattered throughout the levels. There is also a massive keychain collection you will have to find. The keychain collection holds a variety of references from previous Kirby titles, all in keychain form. It will run the gamut from Kirby’s Dream Land all the way to Kirby Mass Attack. You can even use your Play Coins from Street Pass to get more of them. With so many of them to find, it will take a good amount of dedication to acquire the last one. This is because the majority of them are random. Keychains are indicated by floating blue question marks found throughout the stages. While the location of these icons never changes, you never know what you’re going to find and could potentially end up with 99 of the same keychain.

Finishing the last boss also unlocks a mode where you can play as King Dedede, an arena and other bonuses. There are also two mini-games included in the game available from the start. One involves moving Dedede across drums and requires precise rhythm and timing. The other, however is far more fun. I am talking about Kirby Fighters. Pick your ability and go puff to puff against AI controlled Kirby’s in a fight to the finish. With multiple difficulty levels and a solid selection of abilities, Kirby Fighters could have been an entirely different game all together.

Yet, with all of the content and stuff to do, Kirby: Triple Deluxe feels over before it begins. Six worlds don’t last as long as you would hope, and the bonus content can be finished sooner than the main game. Sure, finding all of the keychains might take up some more time, but all it involves is some farming. Kirby titles are usually short, but for his debut on the 3DS, I was hoping that this was the one tradition that got changed. In the end, I still recommend the game to anyone who loves a good Kirby game. Not only is it a traditional adventure, but all of the new stuff make it great for fans. I think the greatest thing about it is that it is the first game to properly use the 3D feature of the 3DS properly. Fight for Dream Land once again in a fun and fully 3D Kirby adventure.