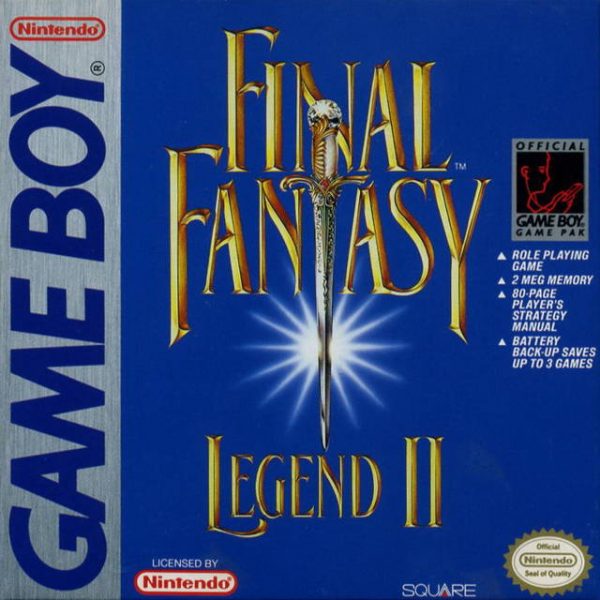 Author’s Note: This review was originally published on August 31st, 2003. I finished the game a few years before the review was written, but the memory of the adventure was still fresh in my head. I feel like this is the best of the three SaGa titles on the original Game Boy. The game received a fantastic remake on the DS many years later.

The second installment in the SaGa (again, not FINAL FANTASY) series, FFLII has made some improvements from the first one. But, they kept some of the bad things…

Story: 8/10
Your old man is a hero who has been on many an adventure. One night, he awakens you to say that he’ll be leaving on a journey. He gives you one of the 66 shards of Magi, and departs. Some time later, you have decided to set out and search for your old man, as well as complete your Magi collection. Put all pieces together and you’ll get the powerful Statue of Isis.

The story is a bit cliche, but only at first. While throughout the whole game you’re looking for Magi, you’re also helping the citizens of the various worlds. And the huge plot twist very commendable.

Gameplay: 10/10
Like the first FFL, you start the game by picking your party. Once again you have humans, mutants, and monsters. A new addition are Robots, so you there is more variety for you. Robots get stronger by equipping weapons and armor. Robots can equip anything, and can restore the items durability. This can really save you money. The humans and mutants gain new stats at the end of battle, and the monsters get stronger by once again eating meat. Mutants are the only class that learns magic. The deep customization options (deep for a Game Boy at least) is very well done. Also, when you find Magi shards, you can equip them and improve your stats! There are tons of weapons and armor to equip, many items, and you even get some NPCs to join you every now and then. For a Game Boy, the game play in this game is superb.

Battles: 5/10
Ughh…the battles are pretty similar to the first FFL. When you encounter the monsters, you tell each of your four characters what to do. There is no new option from the last game. Once again, you get into fights WAY too much and it can get really annoying. Also, many enemies travel in groups. I was once up against 8 Viruses, and that is very not fun. Once again, the enemies become very powerful after a certain point. While it is easier to gain stats in this game, battling to gain those stats can really be difficult sometimes. Overall, I’d say the battles could’ve been better. If they got rid of how random the encounters are, or the difficulty, I’d give them a higher score.

Characters: 5/10
Since you choose your characters, you don’t see any development. However, you see some really interesting enemies. The major bosses are based off of mythology. The way they act shows their power. The intriguing villains give some depth to this game.

Graphics: 10/10
This is the best improvement from the last game. The character sprites look much better, and even have some key features to them. The enemy sprites also look great. The designs of the foes in battles are very nice and well drawn. The spells aren’t anything special, but it makes no difference. The areas are all different. Considering the limited power of a Game Boy, Square did a job well done on making the graphics nice and crisp.

Music and Sound: 7/10
The SaGa series always seems to have great music. This time is no exception. Sure, the Game Boy music is really ear shattering, but the way the tunes are composed is actually quite good. I was impressed.

There are very few sounds in the game. All of them sound pretty similar to each other, but you really won’t care too much.

Replay Value: 2/10
I may see some playing this again to try the classes he didn’t try in his or her first file. But for most people, most people will think once through is enough. Considering the difficulty, one completion is just fine.

Difficulty: Hard
The weapons breaking, the money problem, and the hard battles all add up to a difficult little number for your Game Boy. Although excessive training can get you through some situations, many bosses will challenge you to the max. This is another type of game to brag about beating.

Buy or Rent: Buy
This game was 12 dollars at the store. For an RPG, that’s a damn good deal. If you’re going on a trip, then bring along this game. It should keep you occupied for a long time, especially when you have to level up. Besides, I have yet to see a place where you have Game Boy rentals.

In the end, FFLII is a game that follows up with the traditional difficulty of the first SaGa. Unlike the first FFL, completing Final Fantasy Legend II is much more rewarding in the end. Need a challenge? Then pick up FFLII and search for those Magi shards!