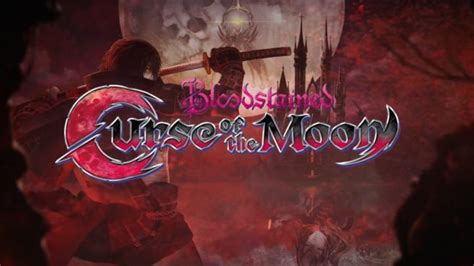 In 2015, Koji “IGA” Igarashi launched a Kickstarter for a spiritual successor to the Castlevania series. Bloodstained: Ritual of the Night promises the Metroidvania style exploration fans of the series have come to love since the days of Symphony of the Night. Personally, I’ve always been skeptical of Kickstarters. Even if you disregard all of the controversy and failures that came with something like Mighty No. 9, the idea of pledging money on something that is just a pipedream seems risky.  For now, Bloodstained is still in the works. What are the backers supposed to do until its release? The answer arrived in late May of 2018 with Bloodstained: Curse of the Moon.  One of the Kickstarter stretch goals, Curse of the Moon serves as a lite-prequel to Ritual of the Night. I was lucky to get a free download code for Curse of the Moon. Long story short, I went through it seven times. Seven. Part of the reason was for the trophies, but the main reason was due to the game’s quality. Inti Creates  delivered a magnificent, 8-bit inspired throwback that will whet your appetite for Ritual of the Night. At the same time, fans of the old-school Castlevanias will gobble this up just as quickly.

The story in Curse of the Moon is barebones. A swordsman named Zangetsu has been cursed by demons. When demons appear, Zangetsu journeys to vanquish them in order to remove his curse. Curse of the Moon begins with a new army of demons arriving on a night of a full moon. Will striking down these demons remove Zangetsu’s curse? It’s hard to say; all Zangetsu knows is that he’s in for a long night. Much to my surprise, Zangetsu isn’t a silent swordsman. Zangetsu will meet other individuals who have a vendetta against the demons. You can speak with them to learn more about their history, as well as Zangetsu’s personality. It isn’t much, but it’s a nice touch.

Really, an easily ignored narrative is Curse of the Moon’s only issue. The rest of the game delivers. I want to start with the graphics. I absolutely adore the way this game looks. At a glance, you have a colorful, 8-bit retro look. The further you get, the more you start to notice the amount of color, detail, and texture. Take a moment to look at the levels. Take a moment to look at the boss designs (and try not to die – more on that later). Take a moment to look at the little things. Curse of the Moon’s graphical style is special because it uses an 8-bit foundation and adds just the right amount of modern touches. Accompanying the graphics is a fitting, retro-instrumental score of music. Castlevania’s original composer, Michiru Yamane, has stepped in to create a soundtrack that is equal parts new and familiar. The catchy beats of an old Castlevania pulse as you listen to new arrangements specifically made for Curse of the Moon. The sound effects will be hit or miss, depending on your tolerance. Personally, I enjoyed the sound blips since it went with the game’s theme.

Curse of the Moon’s best feature is its gameplay. My exposure to Inti Creates has been positive thanks to Shovel Knight and Azure Striker Gunvolt. The team delivered yet again by creating a tight, fun, and challenging (but fair) action-platformer. The first thing you’ll notice is that you can play in either Casual or Veteran difficulty. Veteran difficult level features the “knock back” that was seen in the earlier Castlevania titles, as well as limited continues. Casual does away with these, but don’t let the difficulty’s name fool you. Indeed, Curse of the Moon is a challenge no matter which mode you select. The opening stage will give you some idea of what to expect. Zangetsu uses a sword with a small range to fight a variety of supernatural enemies, blood hungry demons, and towering bosses. Hidden in breakable torches are bags of money, blue potions for Weapon Energy, and/or hearts to restore lost life. Torches with a purple hue hide sub-weapons. Zangetsu’s options are a whip that extends at a 45 degree angle, a scroll that places a bomb, and an Oni mask that increases his power. Sounds familiar, right?

Don’t be so quick to judge. You see, after the first stage, you’ll release a woman named Miriam from demon captivity. You can have her join Zangetsu, or you can kill her to unlock an ability for Zangetsu. There are two other characters that Zangetsu can team up with or sacrifice. This gives the game a surprising amount of variety and depth. Most of the time, players will opt to have these new faces join Zangetsu on a first run. Similar to Castlevania III, you can switch between characters with the push of a button. Miriam wields a whip, and plays just like your favorite Belmont. Gebel is a wizard who has ridiculously powerful sub-weapons, but has low health and a pitiful attack. Last, there’s Alfred. Nearly a clone of Alucard, Alfred can morph into a bat and attack foes with his own swarm of bats.

Curse of the Moon’s levels have various routes. While they all lead to same goal and don’t offer different rewards, it’s an interesting way to experiment with Zangetsu and his teammates. Nearly each stage has a power-up that will increase total health, total Weapon Power, defense and/or offense. But, most of the fun with each stage arrives when you set foot into the boss’s chambers. Bosses hit hard and require careful timing to take down. When you do take them down, they’ll try to take you out in a deadly Desperation Attack. These are very hard to evade, like any good old-school platformer, practice and patience are your key to success.

Once the final boss is vanquished, new content gets unlocked. The first thing you’ll notice is the addition of Nightmare Mode. This mode features Miriam, Gebel and Alfred on their own quest. Finishing the game again with other conditions satisfied will unlock Ultimate Mode. Finally, a challenging yet rewarding Boss Rush Mode is available to those that truly wish to test all they know about Curse of the Moon. Obviously, Curse of the Moon has more to offer than the Castlevanias of yesteryear. It’s rare for me to recommend games that are only available digitally, but Curse of the Moon is worth playing because it gives the Castlevania brand the spiritual successor it deserves.  Perhaps my biggest takeaway is that dismissing the concept of a Kickstarter isn’t fair. If more products like Curse of the Moon are the byproduct of Kickstarters, then I owe it to myself as a gamer to stay on top of these projects.

Overall, 9/10: What Curse of the Moon lacks in compelling narrative, it makes up for in style and aesthetic. Anyone who considers themselves a Castlevania fan will enjoy all that the game offers as they continue to anxiously await Ritual of the Night.