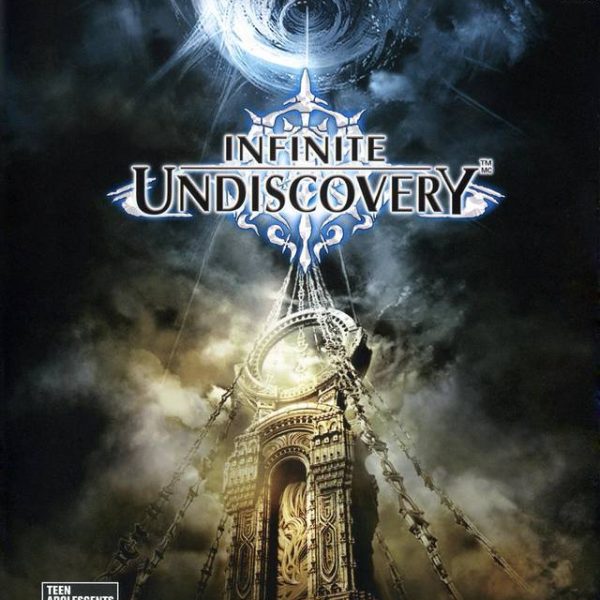 Years ago, I remember seeing a teaser for a game called, “Infinite Undiscovery”. The title itself was enough for me to keep up with any of its announcements and new bits of footage. Developed by tri-Ace, one of my favorite developers, it looked like it’d be an action-RPG with the potential for tons of customization, options, and variety. All of this, while participating in combat that looked like it could rival Dynasty Warriors. The reality is that Infinite Undiscovery feels like a wasted opportunity. Now, it has become infinitely forgettable.

Infinite Undiscovery takes place on a world that is chained to a moon. These chains are causing trouble to world below (monsters, famine, the usual) and it’s up to a band of heroes to break these chains. The heroes are led by a warrior named Sigmund. However, the game actually puts you in the shoes of a flautist named Capell. In a case of mistaken identity, Capell has been captured by an enemy force due to him being the spitting image of Sigmund. Luckily, a girl named Aya rescues Capell from his captors. From there, Capell gets forced into a quest to liberate the world from the evil chains, as well as figure out why he and Sigmund look so much alike.

The story has more to it than mistaken identities and a world chained to the moon. Both of which, by the way, are interesting. There are moments of racism, classism, love, tragedy and death. Capell, much to my surprise, is a great character. He gets wrapped up in a struggle to save the world, all while getting the crap kicked out of him by both his friends and his enemies. He just wanted to enjoy life by playing his flute, wandering the world, and enjoying his favorite snacks. Instead, he is surrounded by a group of comrades that rarely give him a break. There’s a shrew of a woman, a dark-clad chauvinist, and a xenophobic scholar just to name a few. Of course, they eventually warm up to Capell. Also, not everyone gives him grief. It’s just that Capell would have been more open to the idea of saving the world if his party members weren’t such collective jerks. The villains (you know, the ones that are supposed to be jerks) are laughable. It’s like they’re in scenes to perform theatrics instead of stopping Capell on his mission.

Speaking of party members, Infinite Undiscovery has a huge roster of them of join Capell as he adventures through the world. Unfortunately, Capell is the only one you can control in battle. He can hold his own with a sword and can create a slew of combos with it, but he’s the only one you have complete control over. It feels overly restrictive for an action-RPG. To add, your party’s AI will be either on point or completely off the mark. This would normally be fine. However, Infinite Undiscovery’s action never stops no matter where you are unless you hit the pause button. In other words, opening the menu doesn’t halt the action. Here’s a scenario that will happen more times than necessary: Capell and his crew are in combat, but you want to use an item. You need to open a (slow) menu, find the item, select a target, and use the item. The tension in doing this boils over into frustration. Remember, this is an action-RPG and the action won’t stop because you want Capell to administer some healing. What else? If your sword is drawn, you can’t run away from enemies at a decent speed or open treasure chests. Capell can link with a party member and issue a command, but this leaves him vulnerable to attacks. In the end, you’re better off running into the fray and slashing furiously until whatever obstacle you’re facing dies. There was so much potential for epic battling. Sadly, none of it was realized.

In areas where there aren’t hostile forces, the tedium continues. The staples are there: shopping and chatting with the locals. However, there are Private Actions and Item Creation, as well. Private Actions help establish closer bonds with Capell and one of his teammates. Some may involve a fetch quest. Item Creation is, as it sounds, using raw materials to make an item. I usually eat up stuff like this in RPGs. Infinite Undiscovery made it a chore because to do any of those two activities, you need to link with a party member. You can only link with one person at a time. It’s not a matter of simply opening a menu and trying to craft or talking with the right person. You must link and unlink multiple times. Item Creation is a necessary evil since the game features a few difficulty spikes.

Infinite Undiscovery has some gorgeous set pieces. Towns, caves, castles, the moon itself. All of them look beautiful. Playing on the Xbox One, the images look sharper than they would on a 360. Sadly, to contrast this, the characters look goofy, creepy and/or somewhere in between. Their faces look like dolls that emptily stare into the camera, all while wearing too much blush. To add insult to injury, the huge cast and the huger number of enemies on the screen causes slow down. The frame rate is inconsistent. Even the soundtrack gives a sense of wasted potential. It’s fine, but it’s lacking that something that Sakuraba usually delivers. It’s just there to take up space. Or, perhaps, it’s there to drown out the horrendous voice acting. I’m not sure what happened with the voice overs in Infinite Undiscovery, but it’s not good. Even the notable actors deliver their lines like they’re just in a studio, voicing the words without any context. It feels empty. Others feel forced and it the results are bad. It makes the story hard to take seriously during its emotional moments.

While a first run through Infinite Undiscovery is 35 hours, one needs to play on harder difficulties to see the full story. Finishing the game on Normal unlocks Hard. Finishing the game on Hard unlocks Infinite. I can’t think of anyone who would subject themselves to the tedium and difficulty spikes on harder difficulties. This was a bad move on tri-Ace’s part. In fact, I think the game itself was a bad move in the sense that the resources that created it could have been moved elsewhere to help with the then upcoming Star Ocean: The Last Hope. Perhaps Infinite Undiscovery was meant to serve as an appetizer before the main course. Or, perhaps it was meant to try out new ideas; ideas that didn’t get fully realized. That’s the thing about Infinite Undiscovery: it just exists. There’s nothing special about it, even though it looked like there could have been.

Overall, 4.5/10: Infinite Undiscovery’s cool name and premise mislead players into something that feels infinitely underwhelming in the worst ways possible.