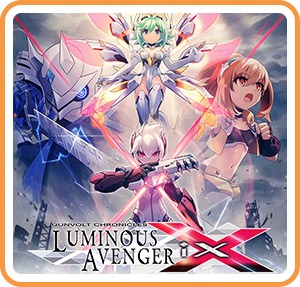 If I was asked to describe Inti Creates’ Azure Striker Gunvolt series, I would call it, “Mega Man Zero on steroids.” These 2D action game fill the screens with flashy effects, bright colors, and over the top anime cut-ins while the player partakes in furious shooting action. Personally, the screens would get so busy I’d have to pause the game in order to refocus my attention. I didn’t mind; the games were fun. Obviously, I was pumped to get the chance to do it again in Gunvolt Chronicles: Luminous Avenger iX. In this new entry, I got to play as the lovably stoic Copen in his first solo project. I had a good time, but a few changes to the core gameplay made the experience not as enjoyable.

Gunvolt Chronicles: Luminous Avenger iX serves a spin-off and follow-up to the adventures of Copen after Azure Striker Gunvolt 2. The intro narrative tells us that Adepts have become the dominant species on the planet. Humans, now referred to as Minos, live in hiding to stay out of sight from the Adepts of the Sumeragi Institute of Human Evolution. The Institute has one goal: hunt the Minos to extinction. However, our hero Copen and his support robot Lola have other plans. The duo aims to topple the Institute while destroying Adepts one at a time. With the help of some new friends lead by a Minos rebel named Kohaku, Copen and Lola have new missions to undergo and new Adepts (now referred to as Falcons) to destroy. I’ve always appreciated the narratives from Inti Creates. They’re not mind-boggling deep or filled with unexpected twists, but they’re written with a crisp, contemporary tone. It makes it worth the time to read each story intermission and to chat with Kohaku and her friends. There are even some unexpectedly tragic moments that belie the game’s aesthetic.

Speaking of, let’s look at the game’s style. I knew going into it that I’d have to ready my eyes for some colorful chaos. The various stages are easy to follow and offer enough variety. Things would go from zero to sixty when it was boss time. The game was always beautiful, but man-oh-man, it got nuts when a boss would use its special skill or when Lola’s Idol Mode activated, which resulted in her singing a tune. Speaking of (again), the music in Luminous Avenger iX was a downer. If Lola was singing, the music’s volume was at its highest setting. Sadly, those cases were the exception.

Luminous Avenger iX’s gameplay was familiar, which I appreciated. Copen can talk to the folks at the base of operations, buy subroutines that boost his abilities, and select a mission. Each mission has a stage divided into two parts with a boss waiting at the end. It’s a classic formula. Copen’s move pool was, for the most part, left untouched. He had his rapid firing gun. He had Septima weapons from the defeated Falcons. Most importantly, he has an extremely useful boost. With the push of a button, Copen would rocket in a chosen direction. This was great for dodging attacks, but it was used more for tagging an enemy. Shooting a tagged enemy means firing homing projectiles. Playing well with Copen required finding a rhythm – jump, boost, tag, and fire away as many times as possible to build a high combo count and earn as much kudos as possible. When kudo would reach 1000, Lola would morph into her idol form. It was a rush.

Sadly, there were more instances of frustration than of high-speed joy. Copen has a limited number of boosts that can be used before needing to recharge. Pervasion, the passive ability that neutralizes enemy attacks, draws from the same pool as Copen’s boosts. It was easy to lose track of how many boosts I had, only to find my kudos score reducing to zero and Copen taking damage. This was mainly due to the screen getting too hectic, too quickly. I didn’t have as big of a problem with this in Chronicles 2. And, it’s not like the game became more difficult. It just became less enjoyable because things would be going well, and then in a flash, death flew at poor Copen from every direction. His health would drop a bit, but my score took a major blow. As a result, my stage rank would be less than stellar. Granted, there’s the option to revisit stages as often as possible to try and improve. It’s just a matter of having the patience to do so.

Luminous Avenger iX was a short game with plenty of reasons to replay it. There’s EX bosses, the chance for higher scores, a boss rush, and multiple subroutines to purchase. If you desire, you can go through your favorite stage enough times to get Copen to level 99. A part of me wants to go back immediately and try to improve my scores. But, a bigger part of me would rather play something that isn’t as busy. At least for now. Gunvolt Chronicles: Luminous Avenger iX was a good game, but I wonder if Inti Creates peaked with Azure Striker Gunvolt 2. Only time will tell. Something tells me that this isn’t the last we’ve seen of Copen and Lola.

Overall, 7/10: Copen’s first solo journey was fun, but it took a lot of patience and focus to enjoy the game in its entire capacity.