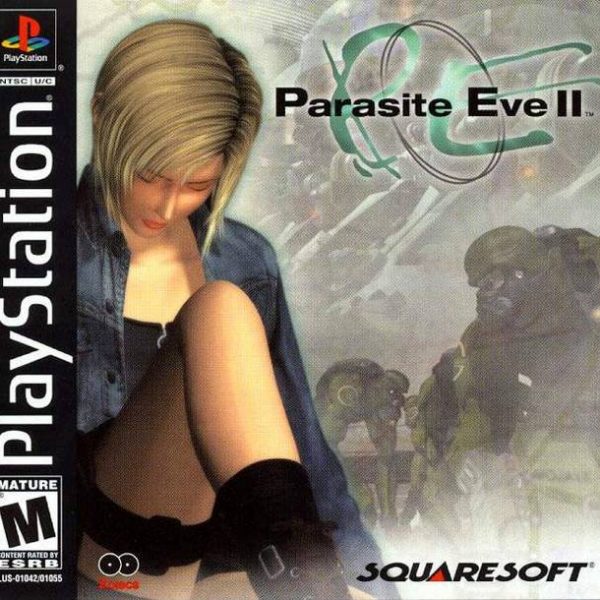 Author’s Note: This review was originally published on October 1st, 2010. Like other reviews of the time, this one features “witty” taglines that separate each section.

I may have been behind the times when I completed Parasite Eve in 2009, but the game aged surprisingly well. The creative story, the awesome protagonist, and the strong game play made the game a joy to play during a time of extra shiny graphics and complicated control schemes. Parasite Eve II was released a few years after the first, allowing players to see what happened next in Aya’s life. While the story continued to deliver and the game still looks good, Squaresoft took a step backwards when it came to controlling Aya through her mission.

California Girls.
Three years after the events of Parasite Eve, Aya Brea moved from the big apple to the city of angels, Los Angeles. Working as an FBI agent in the Mitochondrial Investigation and Suppression Team (MIST), Aya is in the home base working on her marksmanship when she receives a call that the Akropolis tower is under attack by mutant creatures. To her horror, the mitochondria creatures have returned. Even worse, they can now take human forms instead of just animals. It is up to Aya to once again to user her expert skills, mysterious powers, and strong will to stop another NMC threat.

Aya is back and still has that same attitude that made her such a likable character in the first Parasite Eve. She meets new characters as she voyages through Los Angeles, a desert town, and an underground facility. Along the way, you learn more about Aya’s past and the fate of her future. Taking a cue from survival/horror games, much of the story plays out in a fashion similar to Silent Hill or Resident Evil 2. Unfortunately, that’s how it plays, too.

Tank Girl Tussle.
While still full of RPG elements, Parasite Eve II has more in common with the aforementioned survival/horror titles. Aya can equip a variety of guns, body armor, items, and has the ability to enhance her Parasite Energy powers through experience points. The only redeeming feature to the new battles is the Battle Points system. As you defeat enemies, you obtain BP. These allow you to enhance your equipment. Controlling Aya is what causes the game to be a chore to play. I never understood the logic behind the so-called “tank-like” controls. Aya is able to move forwards, backwards, and pivot. In the first game, she was able to move normally. As she moves through pre-rendered backgrounds with zero camera control, pre-set enemy parties will attack her. At least the encounters were no longer randomly generated.

Enemies were relentless and trying to maneuver Aya took practice. Squaresoft took away the active-time meter, the range dome, and the distance-to-damage ratio. Instead, Aya moves back and forth and attacks with the shoulder button. When she runs out of ammo, she’ll automatically reload. You can also use one of your Parasite Energy attacks against a foe. While ammunition plays an important factor in the game, Aya usually has access to an unlimited supply. Like the first game, inventory space is limited.

Aya was very capable to fend for herself in Parasite Eve. For those who don’t get annoyed by the control scheme of Parasite Eve II, you’ll see that she was just as capable as before. However, for those who find this control style unplayable, it would appear that Aya’s skills have grown rusty over the years. The controls were the biggest problem with the game. It’s a shame that you need them to be spot on in order to advance the excellent story.

Lock, Load, Look, and Listen.
Despite Aya lacking in skills, she still looks as fierce as ever. The cinematic RPG continues as Aya faces off against some uniquely designed enemies and towering boss creatures. The FMV sequences were a real treat. The pre-rendered landscapes, while a bit plain in certain areas, were still well-designed. As mentioned earlier, Aya has access to a variety of guns. Hearing them lock, load, and let loose with bullets was spot on an satisfying. Like the first Parasite Eve, the entire game has no voice-acting and a well-composed musical score.

More Mitochondria Madness.
Parasite Eve II was relatively short. Finishing it will unlock some extra features for subsequent plays. Those who can get past the controls will enjoy these extras. Those who are like me and can’t stand playing games with a tank-like control scheme will stop after one file. Heck, they may even become too frustrated to see the well-written, creative story unfold to the end. Fans of the first game should definitely check out Parasite Eve II as long as they’re prepared to deal with some changes that weren’t for the better.