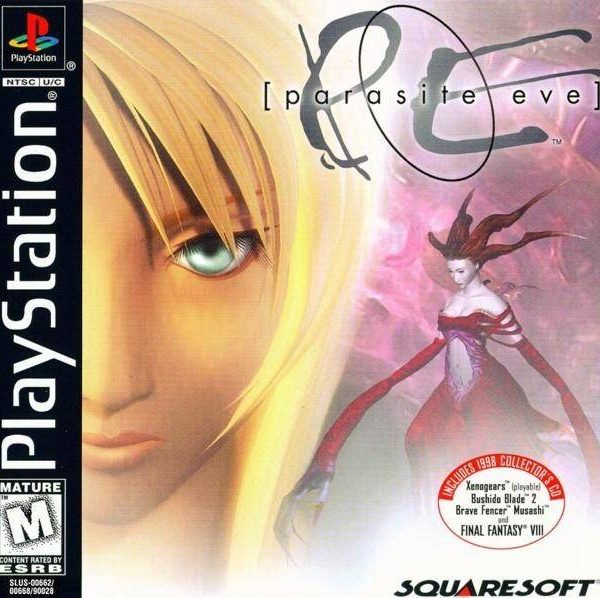 Author’s Note: This review was originally published on November 2nd, 2009. Like other reviews around this time, this one features “witty” taglines that separate each section.

Big Apple. Big Problems.
Our story is set in the year 1997, right before the Christmas holiday begins in New York City. NYPD cop Aya Brea is on a date with an uneligible bachelor to the Carnegie Hall for an opera. During the performance, the leading lady on stage begins her solo. However, as she begins to sing, she transforms into a monster causing people on stage and in the audience to ignite. As the monster, calling herself Eve, burns the flesh of the living, Aya lets her cop instincts kick in and runs up to face her! To add more weirdness to this scenario, Aya remains unharmed and obtains mysterious powers. What is it that causes Aya to remain unharmed? How did she obtain these new abilities? What connects these two strangers with one another? Why does the creature keep talking about Aya’s mitochondria? The bond these two share will determine the fate of the entire earth.

Biology nerds, otakus, and all in between will find something to enjoy with this story. Whether it’s the mitochondria references, the lovely Aya Brea fighting hideously mutated monsters, or learning about her past, this is a wonderfully told story from start to finish as suspense, mystery, and scientific fact come together with the character development of an RPG. However, because it runs the course of six days, the story seems to be over before it begins.

The Big City Life.
As Aya tries to solve the mystery of this “Eve” character, she will be venturing throughout the big city of Manhattan. The New York City map uses a simple point and click feature to reach your desired destination. When you reach the desired destination, you take control of Aya as she explores her surroundings. In the police department, Aya can speak with her fellow officers about the current situation at hand. She can also go to the shop to upgrade her weapons and armor with slots. There will be more information about these later. When things are done in the station, you can head to your next destination.

Wherever you are, hitting the menu button brings up the menu screen, revealing information about Aya. Besides checking her status, you can use items and equip her with weapons and armor. In Parasite Eve, Aya’s weapons consist of fire-arms such as pistols, rifles, and machine guns. Armor consists of bullet-proof vests and body suits. Most pieces of equipment come with added effects. For weapons, these can be elemental attributes, negative status effects, and the amount of bullets held at a time. For armor, added effects include auto-healing, auto-item usage, and protection against various negative status effects. There are more than the ones mentioned, of course. One of the more nifty features of Parasite Eve is through the use of the tool item. You can use a tool to add attributes from one piece of equipment to another, but the first weapon will get destroyed as a result. Finally, remember those slots I mentioned? The slots can be added to equipment in order to give them room for more extra effects. The more slots available, the more upgrades you can add to your equipment. In the end, you can find a weapon you enjoy, add a slot to it, use a tool on an older piece of equipment that has an effect you like, and transpose that effect onto your favorite weapon. The same can be done for armor. This level of customization and flexibility encourages experimentation for the perfect combination, as well as exploration so you can search for hidden arms and armor. Finally, this system is sometimes a necessity due to the challenging, but forgiving, nature of the battle system.

Demon Demolishing Diva.
True to the nature of NYPD cops, Aya Brea is one tough cookie. Deathly accurate and capable of using her new Parasite Energy powers, Aya has the tools necessary to take on the hideously mutated creations caused by Eve. Good thing, too, because Parasite Eve features a real-time battle system that keeps you on your toes at all times. When you enter a random battle, Aya draws her weapon. You can move her around the battle field in hopes of avoiding the monster’s various attacks. Each monster usually has two specific attacks and pattern recognition is the key to avoiding damage. When a bar at the bottom of the screen underneath Aya’s HP reaches a certain point, you can have her act. Obviously, you can use items and Parasite Energy, as well as attack with her equipped weapon. Guns require ammo, but you never have to worry about running out. At least I never did. When you decide to attack, Aya will take aim and fire. The closer you are to the target, the more damage her bullets will do. You need to time your attack properly, because often times enemies will take their turn during Aya’s attack session. Interestingly enough, when you use an item or a Parasite power, time freezes for Aya. Inconsistent? Yes, but also convenient. Parasite Eve is a challenging title. While the first couple of days are nothing to worry about, when you near the end of the journey you face off against challenging enemies, and even more challenging bosses. This is why weapon and armor customization is so heavily emphasized. By keeping up with your equipment, you will find yourself having less trouble in dealing with the upgraded enemies. The battle system is fun, but there are a few problems with it. Battle areas can be cramped, making it near impossible to dodge attacks. Also, Aya has a very limited item inventory, causing you to discard items frequently. Overall, however, Parasite Eve’s new method of demon demolishing was exciting. Upon leveling up, Aya can use bonus points to increase her various stats; something I have always enjoyed in RPGs.

Resident Evil: New York.
Taking a graphical style similar to that seen in Resident Evil and Resident Evil 2, Parasite Eve uses eerie, pre-rendered backdrops as the environments. Squaresoft did a great job capturing New York City and it’s hot spots, such as SoHo, the Museum, and Central Park. The mutated monstrosities encountered in the city that never sleeps are eerie enough to make it so YOU never sleep, which adds a bit of a survival/horror aspect to the game. Aya herself looks great, especially when you get to see her in the FMVs. However, being called the “cinematic RPG”, I expected there to be more of these. The FMVs, as well as the rest of the game, are not voiced; always a plus in my book. The screams that come from the monsters you face were done exceptionally well, as were the other sound effects.

Six Day Period.
Aya’s bloody adventure runs the course of six days. Ladies, you know what I’m talking about. Grossness aside, Parasite Eve features an Ex New Game feature. You can carry over your favorite weapon and piece of armor, as well as extra bonus points. There is also a new dungeon that opens up that will reveal more information to you about Aya, her past, and her future. Completing this dungeon grants you an all new ending. One time through Parasite Eve can take about eight hours. Future times through, with upgraded equipment, will take less time. Despite my praise for this game, you see that I only rated it a seven out of ten. This is because there could have been more to this game. I wanted to see more cinematic sequences, more dungeons, more monsters, and more rewards for finishing the game. Those gripes aside, I recommend Parasite Eve to RPG players looking for a challenge. With a great story and a cool protagonist, Parasite Eve is a fun game from the creators of the Final Fantasy series. Just remember, this is not a part of the Final Fantasy series. Go into playing this title with that mentality and you should enjoy Parasite Eve from start to finish.