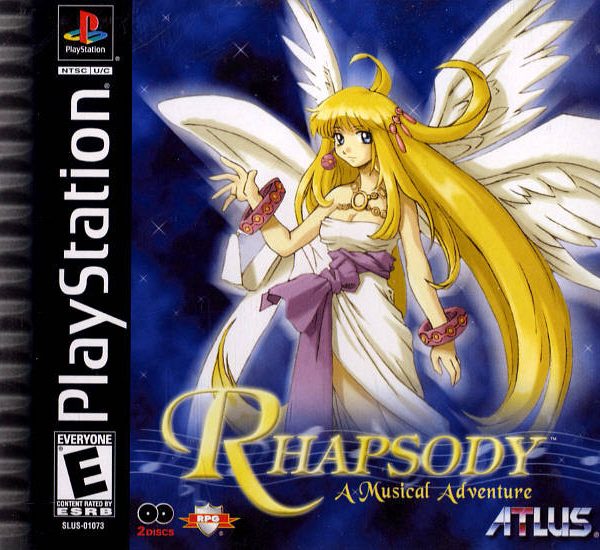 Rhapsody: A Musical Adventure is one of those PlayStation RPGs that has eluded me for years. The first time I saw it, it was sitting next to the newly released Legend of Mana. With only enough birthday money for one game, I went with Legend of Mana. Great game, by the way. It was during this same time that I had faith in “professional video game journalism.” Based on what the “professionals” were saying, Rhapsody was better off being ignored. Years later, Rhapsody received an enhanced port on the Nintendo DS. Whether it was bad luck or a sign from the gaming gods, a glitch that disabled progression caused me to put down the game for good. And now, here we are. It’s been nearly two decades since Rhapsody was released on the PlayStation and I finally had the chance to sit down with it. Rhapsody: A Musical Adventure is a game that can be overlooked. However, the little things that it does right might be just enough to keep you going until the end.

One thing that the game does right is stay true to its name by being a literal musical adventure. Throughout the game, characters will break out into song and dance. I never cared for musicals, but the numbers that the cast of characters perform in Rhapsody are fun to see. Personally, I recommend switching the voice acting to Japanese because the English lyrics sound more like nursery rhymes as opposed to songs. The problem with the Japanese option is that the text displayed is the romaji instead of translated text. It’s a minor nitpick for me, but it will throw off people that don’t understand Japanese. The rest of the music in Rhapsody is worth a listen. The tracks tend to repeat themselves, but again, it’s a minor nitpick.

Another thing that Rhapsody does right is deliver a gorgeous graphical presentation. Rhapsody has a vibrant, lush and detailed anime inspired world with 2D sprites traveling in a top down perspective. The charm that pours from this game’s look is palpable; it’s hard not to smile while you walk around with Cornet and her puppet friends. I really like how none of the enemies in Rhapsody look the least bit threatening. The joy that comes from watching Cornet destroy parties upon parties of enemies with pancakes and flan creates a weird feeling of joy and sorrow. What’s not to love about demolishing enemies with a magical horn? But, at the same time, the enemies never stood a chance. Why did they even try?

This takes me to the game’s combat, which is something that game did not get right. The combat fumbles because it utilizes an unnecessary strategy-RPG system that extends battle time. Cornet and her party of puppets or monsters will be on one side of a small battle field. The enemy party will be on the other. During one of your turns, you can move your character to a certain part of the battlefield. If your characters are in range, they can use a standard attack. Characters can also use magic, items, or defend. Cornet can use her horn to power up her friends and increase a bar that invokes a special called Reward. Rewards include the above mentioned pancake and flan attacks. The need to move your characters so that they can get in range of an attack sounds like a good idea, but the time it takes to finish a battle could have been cut in half. This is partially due to the fact that game, even on the highest level of difficulty, hands out experience and items like candy. This is one of the easiest games I have ever played. Unless you wander somewhere you shouldn’t, there is zero challenge. If this game had standard, turn-based battles, then combat wouldn’t feel like such a chore. With battles being too frequent and an option to run away rarely working, the battles might be the worst part of the game.

Outside of battle, Rhapsody is basic. The world map has a simple, point and click design. Towns are fully of chatty individuals that always have something fun to say. Chatting with the locals is a highlight of the game due to the hilarious translation courtesy of Atlus. It’s fun reading signs and posters talking about Thousand Arms or Tail Concerto. Shops are full of items that you’ll never need. With the exception of a few accessories, chances are you’ll only buy one type of item in the shops: Teleporters. These lovely little devices warp you from the game’s dungeons back to the world map. The dungeons in Rhapsody, much like the battles that house them, are a chore. Each of them have similar layouts in which you wander from small room to small room. Most of these said small rooms have forks that take you to either a treasure you don’t need or a dead end. They’re not fun to navigate, which is a shame because you spend more time in them then you do a town.

Since battles and dungeon exploration is such a drag, the only thing left that could interest you in the game is the story. Rhapsody: A Musical Adventure takes place in the peaceful kingdom of Marl. In the tiny village of Orange, players meet a young yet curvy girl named Cornet. Cornet is waking from a dream she has had before in which she is saved from danger by a dashing prince. Like most girls her age, Cornet hopes to fall in love with a handsome man that she can call her own. But, for the time being, she is stuck living with her grandfather. Cornet and her best friend, Kururu, have been asked to gather a material called Inotium from a nearby forest. Predictably, Cornet and Kururu are attacked by a dragon. More predictably, the two are saved by a Prince Ferdinand from the city of Mother Green. This chance encounter has set Cornet up with a new adventure in hopes of finding true love. Rhapsody’s story works well. There is no ultimate evil bent on destruction. There is no mind-altering plot twist. Instead, we have a girl on an adventure to find her prince and live happily ever after. For me, the story was enough to keep me going. I was pulling for Cornet as soon as she appeared on the screen. Cornet meets some eclectic characters on her quest. The writing is fantastic; you can tell that Nippon Ichi wanted to create something that was different from the usual RPG story and Atlus emphasized this with their translation.

Unfortunately, the story doesn’t get the time to fully develop. Rhapsody can be finished in less than ten hours. Even after fully exploring each dungeon and chatting with everyone I could, I finished the game in eight hours. If battles were more swift, then I can only imagine that the time would be shorter. For all that it does wrong, I’m able to appreciate what it does right. But, others won’t feel the same. A lack of replay ability will make this game a one-and-done deal. Gorgeous presentation and fun writing aside, Rhapsody: A Musical Adventure is a hard sell to most RPG fans.

Overall, 5/10: Rhapsody: A Musical Adventure has the look and sound of a classic, but the game never gets its big break.