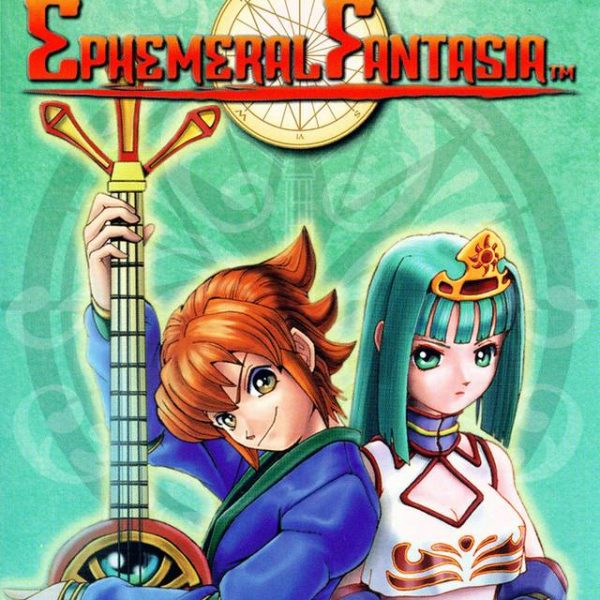 Author’s Note: This review was originally published on August 19th, 2002. It was later updated with “witty” taglines on January 25th, 2010. I actually regret giving it an update because it doesn’t feel as genuine as it did back in 2002. Ephemeral Fantasia really holds a special place in my heart because it was my first PlayStation 2 game, and one that I continue to defend from unfair criticism. This review really reflects the amount of passion I have for it. I’m curious to find out if my views would hold true on a replay.

Before I begin my review, I am going to tell you something right now: Do not, under any circumstances, believe any of the reviews that are below at least a seven. You can bet your bottom dollar that these people did not complete the game. They probably thought the plot was too early revealed, or it was too different, or it was too hard. I don’t know what their deal was, nor do I care. Well, my friend, these people didn’t play the game and see what it is truly worth. But enough of this, let us review this great RPG. Ephemeral Fantasia was my first RPG for the PS2. I read many mixed reviews about it. On the day I picked it up, the worker at FuncoLand said it was a bad idea and tried to talk me out of buying it. Well, it was not bad. It was good.

The Island Paradise.
The story of Ephemeral Fantasia revolves around the minstrel/bandit named Mouse. Mouse has been invited to the paradise island called Pandule. Together with his enchanted, alive and talking instrument, Pattimo, he is to perform for a wedding. The wedding is to celebrate the joining of Princess Loreille and Emperor Xelpherpolis. At first things seem to be okay; Mouse plans on stealing, playing his song, and leaving the island. However, Mouse soon realizes how sinister Xelpherpolis truly is, and only Mouse and his friends can save the island from his evil spell. During a certain point in the game, you will realize what Xelpherpolis is capable of. However, that is only a small portion of the plot. The real story is revealed throughout the game as you progress. The story is fresh, original, and very interesting. You won’t be disappointed with it. Not to mention, there are over 10 characters to recruit as your move forward in the tale. Each one has their own personality, weapon, magic type, skills, and attributes to contribute. Some may not develop well over time, but the ones that do end up being likable. By the end of the game, you will learn to know a few of these characters as though they were actual people. I should mention that three of these characters are secret characters, and two of them can change appearances!

WHERE AM I?!
When on the field, the menu controls are basic and easy to understand. You have your commands that are expected in most RPGs.The controls in the field are easy to learn. One thing that did bother me is the fact the locations are big and the camera’s three settings rarely make things easier when it comes to navigation. Another thing that annoyed me was that you have to find the pieces of map yourself. This idea was original and somewhat fun, but it would have most of the navigation easier if you had a full map. Some gamers will be turned off by the free-roaming, open-ended game play. By this I mean you may not have any idea where to go or how to advance. To solve this, use a strategy guide. That’s what I did, and it helped. Also, time is always flowing in Ephemeral Fantasia. So, if you are supposed to be somewhere at a certain time and get there some minutes late, you will miss the event. At times you will want time to slow down, and other times you will want time to speed up. Unfortunately, it flows at a constant pace. If you do miss a meeting, fear not; you always have a second chance. All in all, this part needed some tweaking because most people will find themselves unsure of what to do or how to get somewhere due to the lack of a map piece. Oh, and I forgot to mention that you can save anywhere!

Man or Mouse?!
Battles in Ephemeral Fantasia are done in active time. You will randomly encounter enemies, you have your HP and MP displayed at all times and wait for your AP (Ability Points) bar to fill up. Then, you choose an option: Arts, Magic, Item, Style, and Exit. Whatever action you choose, you lose AP and you turn is over. Arts is the option you choose for your skills. However, the stronger skills take up more AP. As you progress, you continue to learn more skills. To learn new skills, you have to keep using a weaker skill. So, to learn Mouse’s Jump Slash, continue to use Slash. Magic in the game takes away the same amount AP, no matter what spell is cast. The same goes with items. Style allows you to take an offensive, defensive, or balanced stance. Exit allows you to run. I feel the battles in this game are great. There are 12 magic elements and a countless number of skills. You will also fight a plethora of enemies. Unfortunately, battles are frequent. Random battles always have a tendency to get annoying when you are trying to leave a dungeon or get somewhere. Another thing in battles involves the positioning of the party and the monsters. Either you get surrounded by enemies or your enemies surround you. If you get the latter, your skills and magic that attack areas will be used to it’s full potential. However if you are surrounded, enemy area attacks will attack your party. So, someone is always at a disadvantage.

Anime Action.
The people and monsters in EF are all made in anime style. Personally, I prefer that to realistic people. They have various facial and body expressions that look nice, and they are all very creative. The backgrounds are equally nice. They are colorful and look very real.Also, the backgrounds aren’t pre-rendered. The graphics aren’t super amazing; they don’t reach the potential of PS2, but they aren’t an eyesore either. The battle graphics are where the game truly shines. The motions of each character are fluid and free. The skills and magic were done EXTREMELY well. The graphics don’t reach their full potential, but they are still very well done.

Minstrel’s Song.
A small part of the game’s plot revolves around music, which was done exceptionally well. There are plenty of tracks to please your ear drums. Some of them may have you actually hum along. They are never out of place. Honestly, I felt the music was perfect. I should also mention there’s a mini-game that you can play at anytime where you actually play Pattimo. You learn some songs over the course of the game that you can play anytime using a Guitar Freaks set-up. I think it makes it easier if you have a Guitar Freaks controller, but I never really struggled. This little part of the game is an excellent addition to the music.

Anti-Ephemeral Adventure.
I finished this game in about 50 hours. Like many RPGs, one time finishing it is enough. For a second play, however, you would have a better sense of what to do, and you can do events in the order you prefer. Also, there are two endings, and you would just love to see the one you missed, right? You may want to try new characters and see their abilities and magic as well. So, the replay value is average. I beat it, and now it is put away. But, I definitely will play it again, and maybe even a third time! You should rent EF to get a feel for it, just in case you don’t like the way it works. After you rent it and you are dying to know what happens next, then you better buy it. Just remember that this game is hard. The hard part isn’t the battles, or not having enough money to buy new things. The challenge lies in you, the player, figuring out what to do next. Unlike other RPGs, you aren’t taken by the hand and walked through the quest. The game makes you think, and you have to plan accordingly.

You Never Forget Your First.
So that’s it. EF has a few flaws, but it is still an awesome game that is well worth your time. For my first PS2 game, I’m glad I went with this under dog of a title that had a great story, great battles, and all the charm of a sleeper hit. I’m sure that most people who’ve tried did not beat it, and gave it a bad review. Well, don’t listen to them. This game is challenging, fun, and a great RPG experience. After you beat it, you will not be disappointed! That is a guarantee!