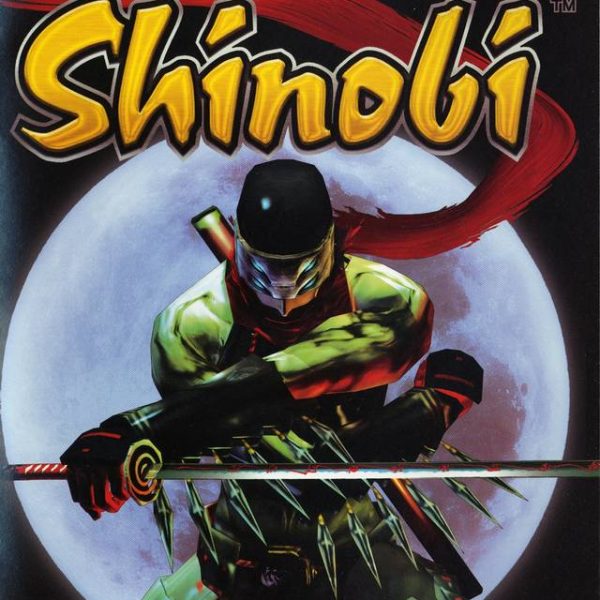 Author’s Note: This review was originally published on December 7th, 2005. I remember telling myself that I had to legitimately finish the entire game on every level of difficulty before submitting a review for it. Getting everything in Shinobi was a proud moment of my gaming life.

Well, it took me a while to finally do it, but I was able to complete Shinobi for the PS2. Not only that, but I was able to complete Hard mode as well! Go me! If you haven’t figured it out yet, Shinobi is a very difficult but fun action game, full of powerful bosses, cool moves, and kick ass heroes. The game does have it’s flaws, but they are very easily over looked. I love this game, and I plan on keeping it forever.

Shinobi is about Hotsuma, the leader of the Oboro Clan. An earthquake ravaged the city of Tokyo and an evil wizard destroyed all of Hotsuma’s clan. Monsters are terrorizing the city, and only the one who possesses the cursed blade, Akujiki can stop the terror. Wouldn’t you know it, that’s none other than Hotsuma. Hotsuma has to travel through Tokyo and beyond to get revenge for his clan. Hotsuma will end up fighting enemies who were once his friends, so this quest is not going to be easy.

While the story is nothing deep, you still feel Hotsuma’s pain as he kills his old friends. There are some expected twists here and there, and a few characters you’ll get to know very well. What is really cool about the story is how Akujiki and it’s effects on Hotsuma factor into the story. I’ll get to that when I cover more about the game play. The story, for a game heavily focused on action and killing, works.

The graphics in the game are one of the game’s flaws in some aspects. While Hotsuma and the bosses look awesome (wait until you check out Hotsuma’s scarf) the monsters were poorly designed. Not only do you see the same models over and over with different colors, but a lot of the backgrounds are blander than flat pop. There are exceptions to this, some of the stages are beautiful, full of lush colors and textures with some very creative enemies, but these exceptions are relatively few. Probably the coolest thing about the graphics is when Hotsuma cuts foes in half, something very cool to watch as he strikes a kick ass pose. These are called Tates, but I will talk about those when I cover the game play, like the Akujiki effects. So to sum up the graphics, they need a bit of work. While the 3D atmosphere works for the game, I wish there was more to see and some cooler enemies to face, save the bosses of course.

The music of this game is awesome. There is a mixture of oriental instruments with techno beats and synths. It makes a great combination, and the boss music is awesome as hell. Sound is just as great. You can pick Japanese or English voice acting, and the effects such as slashes and such are awesome. The sound department is rockin!

So now to the best, but sometimes worst, part of Shinobi for PS2: the game play. This game is heavily focused on intense fighting with Hotsuma as you are slashing foe after foe. Let’s first see what Hotsuma can do. Hotsuma can attack with his sword with a four-hit combo. His fourth attack can be a 360 degree slice which sweeps everyone away from him. Hotsuma is also capable of a Thunder Kick which can break enemy’s guards. Hotsuma can double jump, and perform a stealth dash to both cover distance and confuse foes. These agility features make Hotsuma very mobile as he jumps over countless bottomless pits. He can also run on walls at a quick speed. Hotsuma also has paralyzing darts at his disposal. You can throw one, or you can shoot 8 at a time and paralyze all enemies on screen. Finally, Hotsuma has ninja magic. The spells he has are a fire circle, invincibility, and water blades. Now that you know what Hotsuma can do, it’s time to talk about the Tates.

When four or more enemies are on screen, you can kill them and get a Tate. This improves your score. Once the first enemy is killed, you have a certain amount of time before you fail the tate and the enemy falls apart. Typically you want to Tate, as enemies will drop more stuff when you succeed. This includes life and throwing stars. However, the most important thing that comes from the Tate is the energy that refills your Slash gauge.

The Slash gauge activates later in the game when Akujiki awakens. This awakening is both a blessing and a curse. On the one hand, the sword will slowly drop in Slash life and when it reaches the last one, your life will drained. Therefore, you have to kill enemies quickly. By doing a Tate, you get a full Slash gauge, no matter what. So this is the curse of the blade, but the blessing comes in killing enemies. When you kill an enemy, the sword glows and becomes stronger. The more you kill, the stronger the sword gets. In fact, you can kill a boss in one hit if you kill all the other enemies on screen with a Tate. However, don’t think that it’s that easy to off some of the bosses in this game. You’ll be defeated plenty of times before you recognize their patterns of attacking. This game is tough, and the boss battles are one example why.

First off, the stages are made so that if you die, you start ALL over. This doesn’t include the boss section of the level, but still the levels appear to be longer than they actually are due to you dying so many times. In fact, one stage took me an hour to beat but if you pace yourself and aren’t so reckless, it’d take you about 5 minutes. The stages are made hard by the enemies that are constantly attacking you and the bottomless pits everywhere. A lot of enemies block, so you have to master the stealth dash and dash behind them and hit them in back. There are Oboro coins hidden in the stages that can allow you to unlock new secrets, but finding some of these is difficult. And the last boss…whew…good luck.

But the game is beatable, the challenge adds a new sense of accomplishment to video gamers. Most games are easy enough to beat in a weekend. Shinobi will take you much longer, especially if you want all the secrets. Since the game play is so much fun, you’ll definitely come back for more. Even if you die time and time again, don’t let it stop you from beating the game. Replay value is high because of the new characters to unlock and difficulty modes. There is also an art gallery. Shinobi is full of fun secrets.

In the end, Shinobi’s almost unfair at times difficulty and semi-lame graphics are shunned by the amount of fun you’ll have playing this game. Yes you’ll get frustrated, but you can beat it. No matter what you do, be sure to not give up on a boss/level that is giving you trouble. I say buy this game, it’s only 10 dollars now and it’s worth every cent. Being a ninja has never looked this cool, and Hotsuma is officially the king of cool.