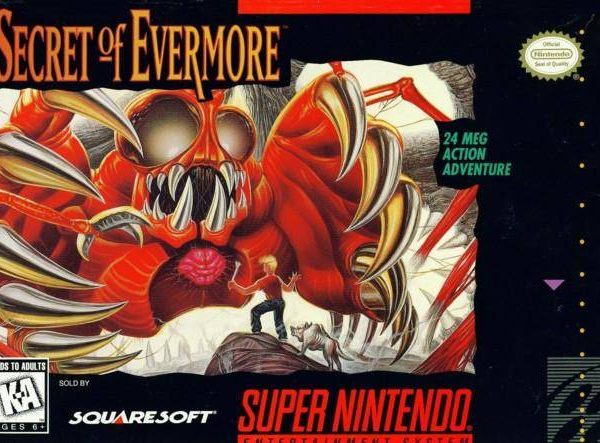 Secret of Evermore stars a young boy living in the town of Podunk. With a bright red vest, blue jeans, and blond hair, this boy (and his dog) enjoy going to the local theater to watch cheesy science fiction movies. After finishing a day at the movies, the boy’s dog chases a cat into an abandoned mansion. After a battle with some machinery and the triggering of an old machine, the boy and his dog are transported to a prehistoric world filled with giant bugs, man-eating plants and dinosaurs. To add to the strangeness, the boy’s dog has mutated into a giant wolf. Now, it’s up to the boy and his dog to search this and other strange areas in an attempt to get home to Podunk. I didn’t mind the story in Secret of Evermore. There is nothing serious or foreboding about the boy and his dog’s adventure. During his entire stay in Evermore, the boy always keeps a positive attitude and enjoys relating his situations to those found in his favorite movies. Throughout the journey, his dog will change forms resulting in some more entertaining dialogue. There are some equally entertaining supporting characters that offer their help and advice to the boy, too. If I could change one thing, it would be more dialogue and character development.

Beyond the story, newcomers will look at Secret of Evermore and immediately think that it’s related, in some way, to Secret of Mana. You can take control of the boy or his dog and explore various towns, fields and dungeons. Pressing the X or Y button will bring up the familiar ring menu. Here, you can set the AI, equip your boy with armor and the dog with collars, equip the boy with various weapons, use items and change the configuration of the game’s settings. Around the towns, you can talk to villagers and shop for items. A unique thing about Secret of Evermore is that each area has its own form of currency. It helps give each setting its own sense of culture. But, that’s about it. Every NPC you talk to has the same form of dialect. When it’s time to move to an area with enemies, once again, people will immediately notice the similarities between this and Secret of Mana. You can attack with the push of a button. After an attack, a meter will start to charge back to 100%. Attacking before it reaches 100% will result in less damage.

I never minded this aspect since it helps the game avoid turning into a button masher. The things I do mind in Secret of Evermore are what cause me to continue to draw comparisons between it and Secret of Mana. I try to avoid doing that, but the further I get the more apparent these differences become. First, there are the weapons. The boy will gain multiple swords, axes and spears the further he gets in the story. Their only difference is their increase in attack power. Furthermore, weapons can only be leveled to three. The advantage in Secret of Evermore is that charging doesn’t cause you to slow down. Other than that, Secret of Mana’s vast weapon selection is better. On that note, the hit detection in Secret of Mana feels more polished. Even when I’m up close and personal to a foe, the word “miss”will appear when I swing my weapon. It’s like the enemies are extra slippery. Another issue is magic. In Secret of Evermore, you learn magic from alchemists. Alchemists let you equip up to eight spells at a time. In order to use the spell, you need to combine two ingredients that can be purchased at a shop or found around Evermore. Alchemy can be leveled up and become quite powerful, but the problem comes with running out of ingredients. At first, money is a major issue in Secret of Evermore. You will have to constantly farm for money, buy ingredients, use the spell of your choice, and repeat. In Secret of Mana, training magic was time consuming but not as inhibiting. That said, there are some fantastic alchemic abilities worth playing around with.

The graphics are on the same level as Secret of Mana. The game is another 2D, sprite infused product with plenty of detail, zippy spell effects, interesting monsters and lots of personality. There aren’t as many enemy designs in this as there were in Secret of Mana, but there are some unique bosses that have so much distinction that they make up for the lack of regular foes. Two graphical highlights are the dog’s multiple forms and the appearance of Cecil Harvey from Final Fantasy IV. Watching the dog alternate between fierce beast to prissy poodle is fun. Seeing Cecil from Final Fantasy IV in a different, more detailed world serves as a good bonus to all Squaresoft fans. The music is one of Secret of Evermore’s highlights and lowlights. Most of the time, there isn’t music. Instead, you’re listening to atmospheric effects: people chatting, kids laughing, birds chirping, and so on. When the music is playing, it’s usually great. Disregarding a dull boss battle theme and some repetitive dungeon tracks, Jeremy Soule crafted some good tunes.

Overall, 6.5/10: A ring menu and 2D presentation does not a Mana game make. Just kidding. Secret of Evermore is functional on its own but some choices result in players pining for Secret of Mana.