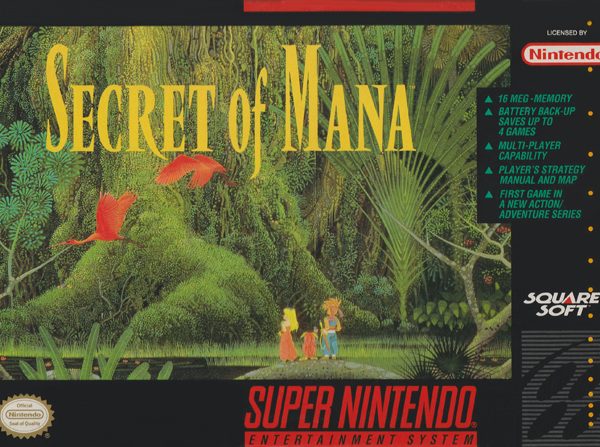 My favorite game for the Super Nintendo, Secret of Mana, is a classic that will appeal to gamers of any level. Known as Seiken Densetsu 2 in Japan, Secret of Mana is actually the sequel to Final Fantasy Adventure for the Game Boy. Fun fact: in later years, that game was remade to Sword of Mana for the Game Boy Advance. However, you don’t need to have any knowledge of that game (or the remake) in order to fully enjoy Secret of Mana. In fact, this is a title I always recommend to people who are interested in trying action RPGs. Still new to video gaming? This is a great title to acquaint yourself with games with action, RPG, and story driven elements. If you’ve been gaming for years but wish to try to something new that has a classic look and feel, then I highly recommend Secret of Mana.

After falling from a waterfall, the hero of the game that you name begins to look for a way back when he comes upon a sword stuck in a stone. Drawn to it by a mysterious voice, he is told that he needs to restore the Mana Tree and save the world from a nightmarish destruction. Pulling the sword has caused monsters to appear and the young boy gets kicked out of the village. Now, he has to gather allies, weapons, and magic in order to make the sword as powerful as it can be in order to save the world. This is a classic story that might have some predictable moments, but watching as a young man, a young woman and a sprite that has no memory of her past grow together into capable warriors that fight as the world’s last hope is heartening. While you can name the boy, the girl and the sprite, their given names are Randi, Purim and Popoie, respectively.

The action is where Secret of Mana shines and continues to be playable in the modern day. An action RPG, Secret of Mana allows you to have up to three people for simultaneous hack and slash game play. With AI settings and the ability to switch characters on the fly, Secret of Mana feels ahead of its time. Pressing the B button will allow you to attack. After an attack, you need to wait for a meter to recharge to 100% or your next attack will be weak. It adds a bit of strategy and allows you to find a weapon that is best suited for you. Furthermore, characters will increase in proficiency with weapons and magic as they use them more. While the boy can’t use magic, he is still a powerful fighter. The three characters work in harmony by combining swords and sorcery to battle monsters, overcome traps and solve puzzles. In towns, you can buy items, chat with folks, acquire new armor and power up your eight mystical weapons. Powering up your weapons comes from acquiring magic orbs, which are earned as a reward for finishing bosses. The ring menu, which is something that the Mana games continued to use in later titles, is an efficient and simple way to keep track of all the goings on in the game.

Shapes, colors and designs come together to give Secret of Mana a gorgeous look. A huge variety of imaginative monsters, towering bosses, dazzling spells and a variety of effects make the world of SoM memorable. The music is just as great. As I write this review for you, my dear and devoted and lovely readers, I am listening to the compositions by Hiroki Kikota. If, for some reason you are unable to stomach the game play, I deplore you to at least check out a few of the fantastic tracks from the game.

Secret of Mana’s main issue is the length. First time players can finish the title in under 20 hours. The side quests and optional material only take a few minutes to complete, thus you can be finished with the game before you know it. That said, this is one of those games I can play time and time again. While this review is for the SNES version of the game, I highly recommend checking out the title any way you can. Dust off your SNES, grab it from the Wii Shop or pull out your phone because I think every gamer should try Secret of Mana at least once in their life.

Overall, 9/10: One of my favorite games of all time. But, first timers will feel differently.