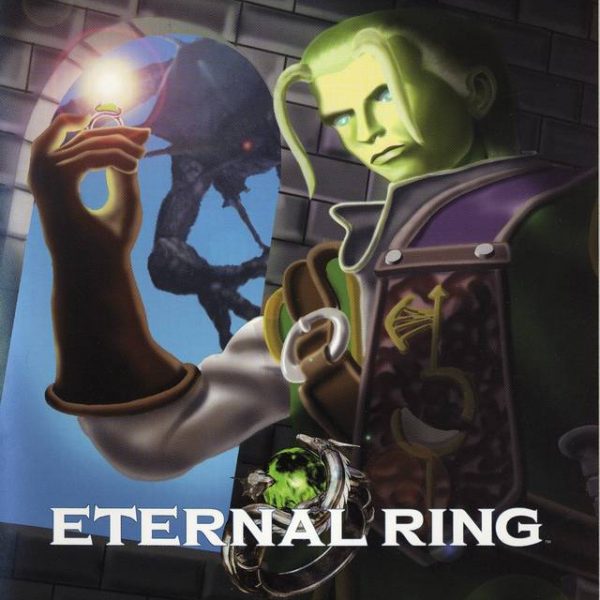 Never let it be said that I don’t give (most) games a fair chance. If there’s a title outside of my comfort zone, there is still the possibility of me trying it out and hoping for the best. This happened recently when I sat down with one of the first PlayStation 2 titles to be released in America: Eternal Ring. As I write this review, my devoted readers, I cannot help but to curse my inability to stomach games that are played from a first person perspective. Now, I would never be caught playing something like Call of Duty, but there are some games out there seemed promising that put you behind the camera. Eternal Ring was one of them.

Eternal Ring lets you take control of a man named Cain Morgan. An orphan raised by one of the king’s higher ups, Cain wishes to find out his origins by traveling to a place called the Island of No Return. More power to him. Personally, I’d be happier staying on the main land and not dealing with the “no retuning” thing. But, Cain is a brave man and secretly boards a ship to the island and is about to uncover endless danger. The story and setting are dark and medieval. Learning about this ominous island and Cain is exciting mainly due to the fact that the game gives you little direction on how to progress. While I have yet to play them, Eternal Ring’s creators also worked on the King’s Field titles. These are known for their non-linear progression and their brutal difficulty. Eternal Ring has both.

Cain starts off with a sword and little direction on what to do. As he explores the island, he will deal with traps and monsters. The island has a “no returns” policy for a reason because everything is out to kill Cain as quickly as possible. Cain’s sword skills are fair. Magic, however, is a different story. Most of the customization in Eternal Ring comes from outfitting Cain with magic rings with various properties. Six elemental properties, healing, support and other magical attributes can be combined in rings to yield impressive results that will keep Cain fighting as long as possible. Each ring has six slots, and you can mix and match magical stones as you see fit. The further you get in Eternal Ring, the more useless your sword becomes and the more necessary it becomes to create powerful spells. Sure, armor and items are important, but this is a game where magic takes priority.

It all sounds like fun, but the action, progression, and everything else takes place from a first-person perspective. Bottom line: I cannot play titles like this because I get dizzy. When I’m toe-to-toe against a giant dragon and I need to zip around the area, the camera will follow and start wavering. The vertigo inducing motion makes it so I have to turn away from the screen and get appropriately charred by the dragon’s fire. That is just one example. If this game were in the third-person POV, I would be praising it. Unfortunately, due to this major issue, I am unable to fully enjoy it.

It’s a real shame, too. This is a stunning looking game. While some areas need polish, the overall look is impressive, especially when you consider the fact that this is one of the first PlayStation 2 games created. Furthermore, the ambiance from the fantastic music adds more realism to the adventure. Unlike the upbeat tempos from most RPGs, Eternal Ring’s soundtrack has darker, more serious undertones that are reminiscent of classical composers.

I think that about covers it. I realize that I gave this game an average score, but that’s mainly because I couldn’t play it for too long without feeling dizzy. If you’re like me in this regard, then you should stay away from the title. However, those looking for a different type of RPG with an intriguing story, a plethora of customization options, great visuals and even greater music, you might want to check out this title. Best of all, the game will likely run you only a couple of dollars. I can appreciate Eternal Ring for what it’s worth, but a first-person POV is simply not my thing and I doubt it ever will be.