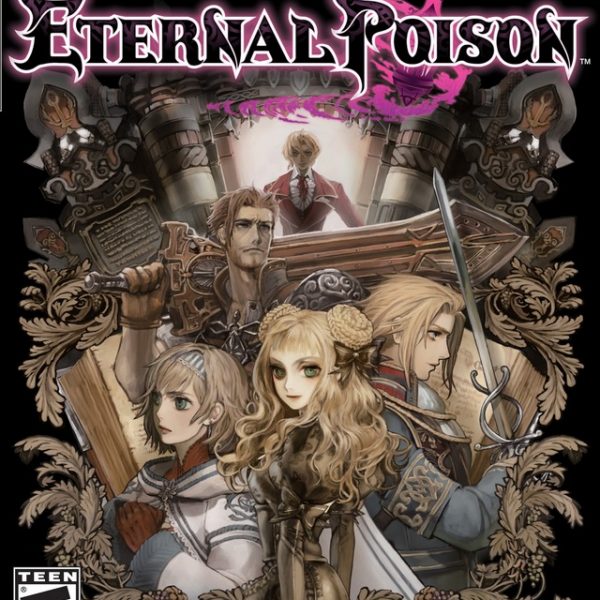 Author’s Note: This review was originally published on March 2nd, 2009. Like other reviews of the time, it features “witty” taglines that serve as separators for each section.

The PS2 is the console that just refuses to go down without a fight. With games like Eternal Poison, the fight will continue for quite a while. Near the end of 2008, the PS2 got hit with yet another SRPG. However, unlike other SRPGs, Eternal Poison uses new mechanics never before seen in the genre. Not only that, but the dark, gripping story make the title an addictive title. Those looking for a new SRPG, especially an SRPG with the grit and challenge of an old school title, should look into Eternal Poison.

Welcome to Besek!
Dubbed a “Gothic Fairytale” by the developers, Eternal Person takes place in the world of Alea. The princess of Valdia, Alea’s most powerful country, has been kidnapped by the evil Majin forces. Furthermore, the Majin realm known as Besek appeared out of thin air. The king of Valdia wishes for everyone to ban together, enter Besek, and rescue his daughter. However, there is more to Besek than meets the eye. Legend says that an item with infinite power, the Eternal Poison, is hidden in the demon realm.

Three unique characters, and three unique stories come together to make Eternal Poison’s tale an interesting one, to say the least. While you will visit the same areas with the same characters, the scenarios are quite different. Each protagonist deals with their internal struggles as they dive further and further into Besek. Each scenario has multiple endings, as well. Performing certain feats with your characters will unlock new scenarios. Needless to say, Eternal Poison has plenty of story to keep you going, and watching it unfold is always exciting.

Home Base Heroes.
Eternal Poison progresses in typical SRPG fashion. Before a battle, you are in the town of Isapolis. After you make your preparations, you leave Isapolis and move to the next battle field. Once you emerge victorious from battle, you go back to the city. Chunks of story get revealed in between. This classic formula has worked for most SRPGs, and Eternal Poison is no different. However, while in Isapolis and preparing for battle, there are various things you can do.

While each character has their own unique party from the beginning, other warriors will enter Isapolis and Besek in hopes of helping you out. You can have these additional characters join you. Next, you can upgrade your equipment. This game requires plenty of micromanaging, but taking the time to outfit your team with the best weapons and armor is worth it. Near the beginning of a scenario, money is tight. Luckily, near the end, you will have plenty of funds available. You can also assign skills to your characters. While leveling up will allow your characters to learn some skills, other skills can be equipped. There are passive skills that boost stats, magic skills, and attack skills.

There are other things you can do in Isapolis. You can listen to music, play a game of skill that unlocks character art in the art gallery, talk to people you save from battle in hopes of getting items, and visit the Majin house. Eternal Poison has a monster catching system. In a battle, if you kill a Majin and the damage reaches a certain point, it is called an Overkill. When this happens, you can then capture the Majin and use it to your advantage. You can sell it to earn money and items, extract it for Poison Points, let it join your party to summon it in battle with the aforementioned Poison Points, or sacrifice it to earn a new skill. The possibilities are endless, and filling the Lexicon (which is your guide to all of the monsters in Besek) will take plenty of preparation.

When all is said and done, you can leave Besek and get ready for the next battle.

Anti-Animations.
Before a battle begins, you can give your party a once-over by changing any equipment you may have. You can have up to seven characters in a battle at a time. Each character has required party members for battle. When playing as Olifen, you always have to have Olifen, his best friend Logue, the sorceress Marie, and the healer Levatte in the party. If you play as Ashley, you need to have her, her best friend Glynne, and the mysterious Reyna in the party. Finally, playing as Thage, you need to have the Lolita lady herself, the powerful Majin Raki, and the mysterious boy Retica in at all times. The last party members are the people you meet in Isapolis. Building the perfect party never gets old.

When you enter battle, the turn order is displayed on the bottom. When one your characters are able to act, you will see various options that are seen in SRPGs, as well as new ones. First, you can move, attack, use items, and/or use a skill. New to the genre is Open ability, which basically means you waste a turn opening a treasure chest. Hardly worth it, I think. The more important ability is the Cap ability, which is short for capture. Use this when a Majin gets an Overkill and then you can go to the Majin house back in Isapolis to do the above mentioned options to it. One of the most fun things to do is to have your story leader (Olifen, Thage, or Ashley) use Lead. This option allows party members to act when their turn is over, move when their turn is over, or even perform a powerful combo attack with the story leader for high damage.

As you fight the enemy, you will notice that every action takes a while to load and watching the animation gets tedious. Luckily, you can turn off these animations to make the battle progress smoother. There are other unfortunate things about the game, as well. Unlike most SRPGs, there is no indication of how much damage will be dealt. This is quite problematic when you are trying to Overkill a Majin for your arsenal. Another problem comes with boss battles. Bosses come equipped with a Demon Aura, which nullifies all damage until it is broken. If you lack the proper attack to break the Demon Aura, the boss will flee and you will miss out on excellent experience points, as well as the potential to add a boss Majin to your collection. A minor inconvenience is if your lead character loses all HP. This means automatic game over. Luckily, this never happened to me.

There are other fun things to mention, but that is the basic premise of the battles. While there are a few bugs, the overall presentation is not only fun, it is addicting. Learning new skills, acquiring new Majin, and watching the plot unfold during a battle is nothing short of fun. Word to the wise: you are unable to revisit battle fields, thus there is absolutely no level grinding in this game.

Gothic Graphics.
The look of Eternal Poison is a mixed bag. The battlefields, Isapolis, and the character art are gorgeous. Unlocking the artwork in the gallery is quite eye-pleasing, too. The actual character models, most of the monsters, and the full-motion videos could all use a bit of work. They were not bad, but they were not amazing. But, as we all know, great graphics do not make a great game and Eternal Poison’s graphics look fine. While the PS2 is not pushed to the limit, I was too busy using all of my strategic know-how to worry about how pretty an attack or spell looked.

The Score Scores.
Besides the battles, character managing, and fun story, Eternal Poison has an excellent soundtrack. There are types of music from all types of genres, each of which sound great. Jazz, hip-hop, opera, easy-listening, and dynamic battle tracks come together to make a wonderful soundtrack, which is actually included when you buy the game new. Along with the music is a great cast of voice actors. Some of the voices could be better, as expected, but the majority of them sound great. Many gamers will recognize Olifen’s voice right off the bat.

A Good Poison.
Completing the story with all characters is required for you to reveal all the secrets of Besek, Valdia, and the world of Alea. Doing so will take about 40 hours. The game could be tough for those who lack strategic abilities and rely on level grinding. Also, the lack of a damage indicator may frustrate perfectionists who wish to get everything in their Majin Lexicon. However, I found most of the game’s features outweighing the flaws, and the result was an SRPG that goes to show everyone that the Playstation 2 is not going anywhere for a while.