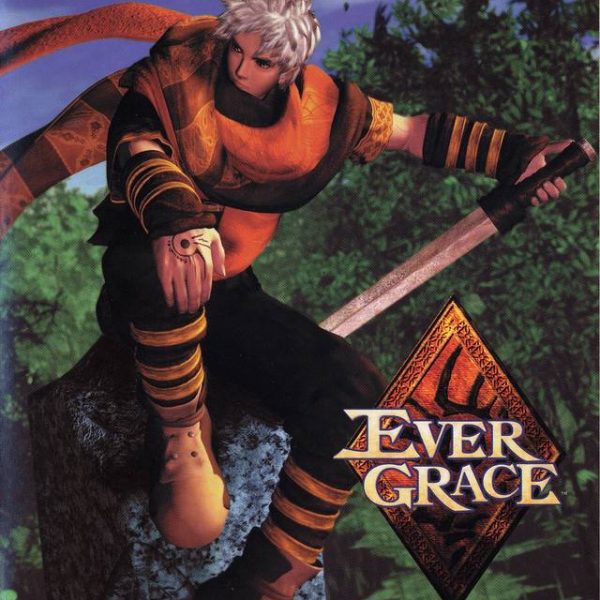 By the time I purchased my first PlayStation 2, its game library was sizable. I was able to select from a variety of games to begin building my collection and ended up deciding upon Ephemeral Fantasia as my first. Near this fantastic title on the very same shelf was another RPG called Evergrace. With amusing cover art and a wordy description on the back, I ignored the title for years. And years. And years. I finally decided to add another RPG to the collection and see if this launch title was one that I should have played immediately or one worth forgetting. Surprisingly, Evergrace has lots to offer. However, it’s important to remember that launch titles have a bad reputation for a reason.

The first thing people will notice when they pop in Evergrace is the music. Unfortunately, this is a bad thing. Evergrace has some of the worst audio I have ever heard. At the time, the PlayStation 2’s full potential may not have been realized. However, previous systems have had excellent audio so I’m wondering what happened with Evergrace. Bizarre combinations of instruments and terrible voice acting that can’t be turned off make for a game that will require the mute button in case folks wish to try it. On the opposite end of the spectrum, Evergrace is a stunning looking game. Even for a launch title, the amount of detail put into the world of Edinbury is admirable. The characters you control will have a variety of weapons and armor to equip. Switching equipment around will result in your characters changing appearance. Even better is that you can change the color of various items. With so much possibility, Evergrace is a step in the right direction for other games that wish to let you create character’s appearances to your liking.

The characters I’m talking about are Darius and Sharline. Throughout the game, you will switch between the two as the story progresses. The story takes place in a mystical world where certain individuals are born with Crests. When someone is born with a Crest, they are ostracized due to the superstitious history of disasters surrounding them. Darius happens to have one, of course. Internally dealing with his tragic past, Darius wakes up in a strange world and is guided by an odd entity named Krisalis. Sharline, a sisterly figure to Darius, starts her journey after also waking up in this strange world. After meeting a girl named Sienna, Sharline hopes to reunite with Darius and return home. Two heroes starting off in two different regions is a unique method of story telling. While the story has plenty of lore, drama and history, Evergrace’s narrative through awful voice acting and poorly translated dialogue makes it hard to take things seriously. That said, Darius and Sharline grow to become interesting individuals that develop relatively well.

Since Evergrace is an action RPG, the majority of the game is spent finding equipment and slashing enemies with the square button. This is also where the majority of the problems dwell. Instead of a traditional level up system, Darius and Sharline increase their stats only with their equipment. Armor, helmets and anything else you can think of will raise and/or lower their various stats. This means if you aren’t thorough in searching everywhere for new gear, you could find yourself at a disadvantage. Furthermore, weapons have a durability level that will go down with each use. When it reaches zero, the weapons become far less effective. The good thing is that you can upgrade and repair all of your equipment to increase stat boosts and, more importantly, unlock new Palmira actions. Palmira actions refer to skills that the two heroes can unlock and use as their equipment gains strength. A huge variety of abilities end up at your disposal. You can summon lightning, perform a slashing combo, create enchanted vines and/or throw ice at enemies. The bad thing is you can only use two at a time. Instead of having them mapped to the shoulder buttons and using an system to create combos, you have to open the menu, equip a weapon, select the Palmira and then confirm the changes. For an action RPG, the changes need to be executed effortlessly and managing all of the utilities in Evergrace gets cumbersome. Furthermore, the action isn’t as solid as other titles. A shaky camera and tortoise walking speed tend to slow things down. A stamina bar similar to something found in Secret of Mana slows down the action even more. While there is potential for Evergrace due to all of the equipment options, the game lacks too many little things to make you coming back for more.

If you do decide to see things through, you are looking at 20 to 30 hours of game time. A monster manual, an in-game tutorial and a few other features could intrigue gamers to see everything through to the end. However, the fact that Evergrace is one of the first PS2 titles and filled with a variety of flaws makes it hard to recommend. For a launch title, Evergrace impressed me. However, Evergrace is still a launch title and I’m glad I decided to wait until now to finally give it a chance.