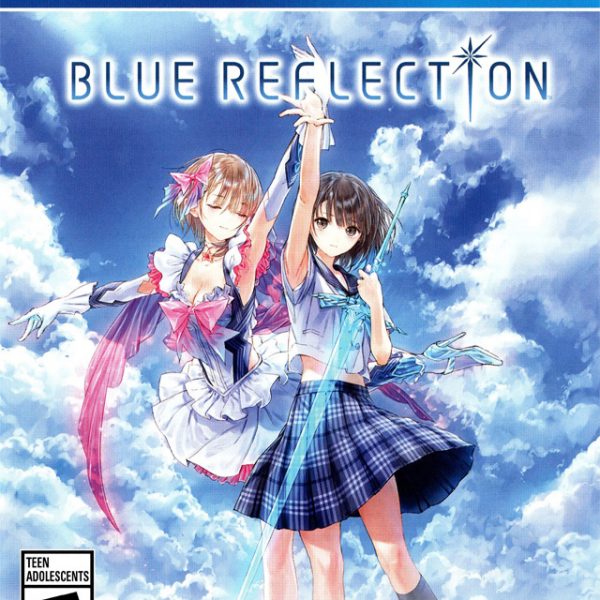 Gust has attempted to do it again. The company known for the long-running and very enjoyable Atelier series decided to step away from the atelier and their giant cauldrons with their newest creation: Blue Reflection. Before starting the game, I promised myself that I would go in with an open mind; mainly due to Nights of Azure being such a disappointment. The good news is that Blue Reflection is significantly better than Nights of Azure. The bad news is that I have a more difficult time recommending Blue Reflection because a few design choices and technical issues keep it from reaching the greatness that the developers aimed for.

Blue Reflection takes place in the fictional city of Hoshinomiya. A new girl has been enrolled into the summer program at Hoshinomiya Girls High School: Hinako Shirai. Hinako, or Hina for short, is apathetic about heading to this new school. Once a promising ballet star on the rise, Hina suffered an accident that prevented her from enjoying her passion. On the first day of classes, Hina runs into an old acquaintance. This acquaintance starts to become overcome with emotions at seeing Hina again, but these emotions cause her to spasm. In a flash, Hina is transported to verdant field filled with pink flowers, otherworldly structures and strange monsters. Things get weirder when Hina transforms into an outfit not unlike those found in magical girl anime. Hina has become a Reflector, and with help from the mysterious Shijou sisters, she needs to prevent other classmates’ emotions from running rampant.

The game’s pace starts strong and carries this momentum until the end. Who exactly are Yuzu and Lime Shijou? Why did Hina become a Reflector? What is the reason behind everyone’s emotions becoming so unstable? All of these questions get answered as the narrative continues. Blue Reflection’s story is fantastic. It’s an emotional journey watching Hina struggle to find her place at Hoshinomiya Girls High School and form friendships with her classmates. Hina’s growth over the game, as well as the growth of her friends, proves that Gust can develop a strong tale that doesn’t have to revolve around item creation. The only issue I have with the story is that the written dialogue is plagued with typos, spacing errors, and margin errors. It’s not a game breaker, but it’s hard not to notice it. I’m not sure if it was crunch time or if someone got lazy during play-testing, but it’s something to keep in mind when playing.

Blue Reflection has been described as “modern day Persona meets Sailor Moon.” At school, Hina will be able to chat with her friends and boost their affection towards her. By answering certain questions the right way and by choosing to invite them to hang out after school, their affection will grow. Doing this will let Hina earn a Fragment, which are emotions in a crystallized form. Learning more about Hina’s friends as they go to arcades, restaurants, stores, movies, and more is fun at first. Eventually, it becomes tedious. Hina will invite a friend somewhere, her and said friend will go to a location in Hoshinomiya, Hina will be in her room and you will get ready for the next day. There are 12 girls that Hina will get to know. It’s not necessary to maximize their affection, but even doing the bare minimum can ware out its welcome. Aside from this, Hina can chat with her friends on her cell phone, play a fun Tomagotchi style mini-game, and listen to music. The most important thing she can do is help out her classmates by stabilizing their emotions.

Doing this requires Hina, Yuzu and Lime enter the Common, which are dungeons that represent the emotional psyche of a person. Throughout the Commons, Hina can find items and battle monsters. If the Common is part of a story, she needs to find a Fragment that needs stabilizing. If the Common is part of a side-quest, she needs to defeat a certain number of enemies or gather items. No matter what the situation, the Common is a mixed bag. They’re an interesting mix of barren and busy. They represent various emotions, but they look the same no matter which girl is being helped. Similar to raising the affection of Hina’s friends, the Commons tend to outstay their welcome.

Luckily, the turn-based battles in Blue Reflection never grow old. Hina, Yuzu and Lime have access to a variety of skills. Most of these require MP to use. After taking an action, they will have to wait for another turn to come up which is shown on a Time Line at the top of the screen. The more powerful skills usually require more waiting time. It’s a basic system, but there are some fun features that slowly get added throughout the game. The first is the Ether Gauge, which can be built via a variety of methods. When the Ether Gauge reaches a certain point, characters can perform multiple actions in one turn for some impressive results. You can also use the Ether Gauge to guard or recover energy. Normal battles are a good time, but the real fun comes with massive, towering bosses that wish to do battle. These monstrosities have multiple parts and require more thought than regular foes. The friends that Hina makes can be used during these battles. The camaraderie from Hina’s friends will boost the Ether Gauge while healing Hina and her friends or damaging the boss. I wish there were more of these battles because they were unique and fun.

Blue Reflection doesn’t have a traditional leveling system with experience points. Instead, Hina and the sisters will acquire Growth Points at set intervals. These get distributed to four base categories that will allow them to learn new abilities and increase their statistics. Finally, the Fragments I keep mentioning get attached to Hina’s, Yuzu’s and Lime’s skills to alter their effects, provide bonuses, and more. It’s fun to mix and match Fragments to make the magical girl trio more effective. Battles are on the easier side, but watching magical girls rain destruction on menacing creatures never stops being a good time.

In fact, I never grew tired of seeing the girls perform their abilities in battle. Gust knows how to design a beautiful game. Blue Reflection is no different. Whether you’re in the Common or at school, Hina and the rest of the characters move and express themselves well. The monsters, specifically the bosses, are some of the most creative I have seen in an RPG in quite some time. But, there are two unfortunate issues with the graphics. The first is that some of the models tend to have choppy movements. It’s rare, but it’s noticeable when it happens. The other issue isn’t technical, but a design choice. More events than I cared for took place in a shower or a locker room. Whether or not this can be considered fan service is up for debate, but scenes like this really take away from all the great things Blue Reflection does.

Arguably the best, and my favorite, aspect of the game is its music. Words on a screen can’t begin to describe the beauty this soundtrack holds. The music in Blue Reflection made me want to learn to play the piano just so I could replay some of the game’s amazing tracks. For a game that has such an emotional and endearing story, the music amplifies things by 110%. As for the sounds and voice acting, it’s the usual quality that Gust delivers. The game has Japanese voice acting with English subtitles. This makes sense since the game takes place in Japan.

Blue Reflection is a short game. You can finish it, with the platinum trophy, in about 25 to 30 hours. With three levels of difficulty and the ability to build your characters in different ways, the play time could be shorter for those that really know what they’re doing. I think my biggest issue with Blue Reflection is that I’m not sure who to recommend the game to. Blue Reflection is worth playing so you can experience a story that impacts every emotion possible both figuratively and literally. But, when the game has a 30 second scene of Hina and her friends in a shower, it takes away from the overarching theme. If you’re able to take moments like this in stride, then you’re in for a real treat. Gust took risks with development of Blue Reflection. Unlike Nights of Azure, the risks were worth it.

Overall, 7/10: Blue Reflection will struggle to find its audience. But, if you’re part of that audience, you’ll be pleased.