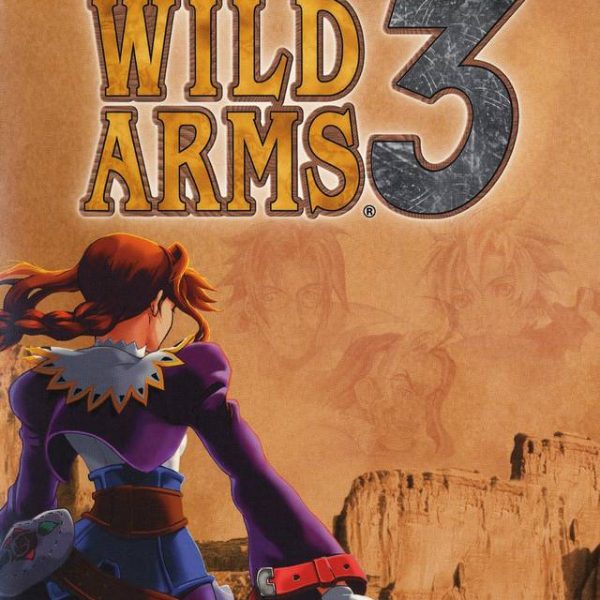 Author’s Note: This review was originally published on November 15th, 2010. Like other reviews around the time, this one features “witty” taglines that define each section.

As of this writing, the Wild Arms series has been out for over ten years. My first exposure to series was with the PlayStation original. I forget how far I got, but I never had a heavy dosage of the series. Sure, I dabbled here and there in these wild west themed RPGs, I never sat down and played through one from start to finish. That is, until, a boring afternoon when I had nothing to play. On a whim, I put Wild Arms 3 into the PlayStation 2. After the initial sequences, I was hooked and I knew that I wanted more. I wanted more Wild Arms 3 and, ultimately, wanted more of the series.

The Train Track Trails.
Our story begins on a dark and stormy night. As a train chugs away towards the next destination, four strangers encounter each other during a robbery. The chance encounter starts as a fight to take back an artifact from some goons, but turns into a fight for Filgaia’s survival. The first is Virginia Maxwell, a strong willed lass who left her home in search of her missing father. Next is Clive Winslett, an educated gentleman who loves discovering ancient artifacts and civilizations of times long past. The third is Gallows Carradine, a man who comes from a tribe of shamans that worship Guardians. He has left his home to escape his destiny. Finally, there is Jet Enduro, a young treasure hunter with no recollection of his past.

In traditional Wild Arms tradition, you pick a scenario, play through it, repeat until the last character, and begin the main quest. The story was nothing special, despite the wild west setting and wasteland environment. The plot twists thrown were enough to keep going because most of them involved the four heroes. In fact, Virginia and her team were one of the best things about Wild Arms 3. The game’s focus was more on character development, interaction, personal growth, and chemistry. They will easily grow on you as you get to know them and as they get to know each other. Jet’s reluctance turns to loyalty, Gallows apathy turns to acceptance, Virginia’s bravery grows with her motivation, and Clive’s sense of reasoning keeps the party from getting too crazy. The team encountered diabolical villains who didn’t receive as much attention to growth, but still kept the story’s pace moving briskly.

No Man’s Land.
The speed of the game might come to a screeching halt at certain points for those who don’t use a strategy guide. Wild Arms 3 was as linear as they come, but finding your next destination was tricky for a couple of reasons. The first was due to the search system. Filgaia was barren to Virginia and her team. Players need to use the square button to send out a radar that uncovers towns and dungeons, and even a few items. Since the radar is so sensitive, you have to be at the exact location in order for said location to be revealed. Townsfolk did give give clues as to where certain things exist, but I was wandering without any guidance for most of the game.

Even if you do reveal a new town or dungeon, it may not be your next destination. Unless you pay close attention, and I mean CLOSE attention, you’ll be left scratching your head in confusion as to where you should go next. A guide served me more than a reference; it served as a life line because certain events during the game leave you without any ideas for progressing the story forward.

When you finally do reach your destination, you can explore. Towns are full of people, hidden treasures, and secrets. You can buy items, with the exception of the token Heal Berries. Instead of buying Heal Berries, you have to grow them in a secret garden. Don’t let this worry you, though. You will find plenty of healing items as the story progresses. Alongside buying items, you can use your hard earned gella to buy upgrades for your character’s ARMS. Customization plays a huge role in Wild Arms 3. Besides fine-tuning the guns of each character, they can be equipped with up to three Guardian Crests that allow them to perform magic. Finding the right combination was fun and can adapt to any play style. Guardian Crests can be outfitted with items that grant the team protection from elements, protection from status ailments, upgrade stats, and provide awesome bonuses. This customization allowed for unlimited possibilities and plenty of usefulness in battle.

Blazing Saddles.
Wild Arms 3 took a basic blueprint for battles. Various subtleties make it stand out, however. As you wander the world or puzzle-filled dungeons, you’ll notice a meter in the corner of your screen. This is called the Migrant Seal. This increases as you progress through the game. With this you can avoid random battles as long as you have the capacity in the Migrant Seal.

If you use up your meter or you decide to fight, you’ll begin a battle. Typically you begin with standard attacks, then you build up Force Points to unleash magic and character-specific skills, and eventually emerge victorious in these fun, turn-based battles. Those with higher agility will act first. When the game begins, battles tend to be on the slower side. Both sides exchange attacks until one side emerges victorious. As you get further into the game and acquire more Guardian Crests and Guardian Crest items, battles become exciting. Something interesting about the battles is that you can fight on horseback, on a sand buggy, and on your airship.

Watercolor Wasteland.
Filgaia may have been like a barren wasteland, but the cel-shading and watercolor strokes looked wonderful. The artistic style used was a perfect fit for the game’s setting. Characters donned outfits that mixed the wild west with Japanese animation. Their expressive facial movements and fluid combat motions added extra charm to the design. While the graphics were nothing ground-breaking, they were a pleasure to see. The music was the same way. There was no voice acting, but there was plenty of wild west inspired tunes. A few of the tracks were heavily inspired by anime, but each song was fitting for every circumstance.

A New Age.
Virginia and her team had their work cut out for them. The normal quest took about 30 hours, but the plethora of side-quests, secret bosses, and hidden dungeons tacked on at least another 15 hours. Playing all that Wild Arms 3 had to offer was a real treat. The pacing of the game, the dungeons that took just the right amount of time, the bosses that took just the right amount of strategy, and the overall quest itself made the game enough for me to want more of Wild Arms. Wild Arms 3 did have issues in terms of direction, and the end of the game bosses were too easy. But, it was a fun game and I’m glad I was able to finally get a taste of the series. This review is a tribute to a new age of gaming for me because I now have another RPG series to enjoy. Obviously, Wild Arms 3 is not the first in the series, but for me, it was the right place to start.