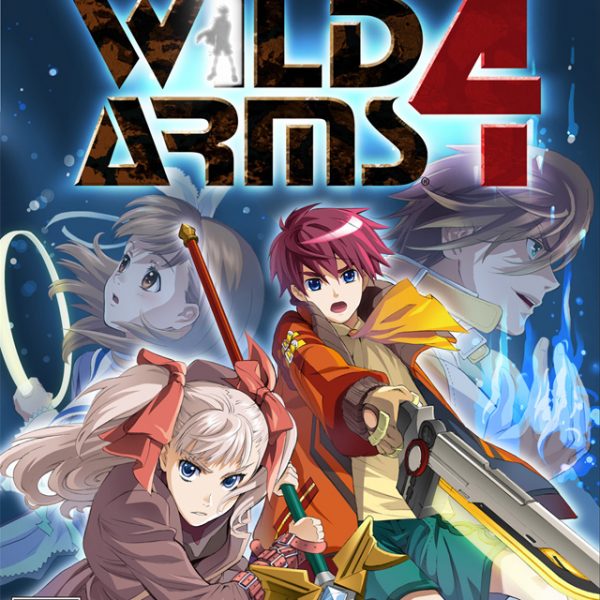 Author’s Note: This review was originally published on January 26th, 2011. This was one of the last reviews where I used “witty” taglines to separate each section.

The Wild Arms series usually combines the following things: a Wild West setting with music to match, an anime inspired story that takes place in the world of Filgaia, and a traditional battle engine. Wild Arms 4 has most of that, but it also takes the series in an entirely new direction that is much different from it’s predecessors. Now, the battles require some thought. Now, the characters have more dimension. Now, there are action/adventure elements that require timed button presses. The new style of the Wild Arms series is an excellent example of how to take a popular franchise, rearrange the structure and create a title perfect for any fan of RPGs. It does have a few issues, but they don’t stop the game from being fun in any way.

Hey Jude, Don’t Make It Bad.
Wild Arms 4 starts in the village of Ciel, a sanctuary developed by technology that isolates the villagers from the outside world of Filgaia. Tired of war and it’s casualties, the inhabitants of Ciel look after a young boy named Jude Maverick. Oblivious to the outside world, the curious Jude is shocked to see soldiers infiltrate Ciel and attempt to destroy all he knows. While protecting a young girl named Yulie Ahtreide, Jude awakens a hidden power to control ARMs, a powerful device capable of destruction. After Jude’s ARM goes out of control, he ends up in Filgaia and goes on a quest to find the villagers.

Jude is only 13 years old. At first this may sound like he’ll be an annoying lead, but that is not the case at all. In fact, Jude and his team are some of the most likable, well developed characters in the franchise. Besides the innocent and demure Yulie, Jude is joined by the cocky Arnaud G. Vasquez and the stern, caring Raquel Applegate. These four youths join forces to prove to the world that children are not to be messed with. The story starts basic and it grows to be a wonderfully told tale with cool villains and a great supporting cast. People who haven’t played the original can fully enjoy Wild Arms 4, too. It’s just a shame that the game ends in such a short time. When all is said and done, the tale takes only 20 to 30 hours to finish.

Pitfall Jude.
Along with the plot, Wild Arms 4 is completely different than it’s predecessors in terms of tee control scheme. Jude is the onscreen character you control at all times. He can jump, double-jump, slide through small spaces, and perform a smashing kick attack to activate switches. Jude’s agility will be put to the test because many of the dungeons require him to jump from platform to platform. Luckily, he gets the ability to slow down time for a short while in case the platforms move too fast. In certain areas, activating his time control will reveal hidden cash. This new approach to exploration is just the beginning. Filgaia’s world map is gone. Now all you do is point and click to the next destination, similar to the Grandia titles. No more Search System! By fulfilling certain conditions in dungeons, you can turn off all random battles instead of worrying about a Migrant Seal level. Towns still have plenty of people to talk to and shops, but inns are no longer present. Since your hit points get recovered automatically at the end of a battle, you don’t have to worry about those. For your magic points, just examine a save spot in town or a purified save spot in the dungeon to get them restored. To purify a dungeon save spot, you need to perform a certain task, solve a puzzle or fight a boss. Finally, in the dungeons, Jude will find items called Photospheres. These transform into tools such as swords, magic wands, and bombs. As you can see, everything has been altered for Wild Arms 4 and the result is non-stop fun. The only minor downside is that the puzzles are on the simple side. Usually, the Wild Arms titles have tricky puzzles to solve but this installment lacks those.

Sexy Hexy!
The biggest change of all is the battle system. However, it’s also the most fun change. Battles occur at random and are a cross between turn based and strategy and that’s all the similarities you’ll see from other RPGs. Now, battle are fought on a random arrangement of seven hexagons. Like a giant honeycomb, six hexagons surround a central seventh one. Three of the hexagons outside the central one are called Ley Points and will have three of four elemental properties: wind, earth, fire and water. Characters and monsters are randomly placed in the hexes when a battle begins. Regardless of where everyone starts, the speed of the battles and the opportunity for tons of strategy is exciting.

The best way to outline the battle system is to give an example. Let’s say that Jude and Yulie are in the middle hex, Raquel is in an outside hex and Arnaud is in an outside hex with the wind LP. Monsters are in the remaining hexes. Jude and Yulie will both take damage when attacked, but when Yulie casts a healing spell, they’ll both get healed. The same can be said if Jude uses an item. However, Jude is speedy so it might be best to start the assault on an enemy. Arnaud’s magic is now altered with wind but he can use his Jump ability to teleport to another hex. However, in doing so his magic loses an elemental property that an enemy might be weak against. This is especially true if an earth LP is being occupied by an enemy. Raquel can use her Move and Attack skill to move to another hex and attack the hex with the most enemies in it. Basically, there’s advantages and disadvantages to every hex on the battlefield. Instead of negative and positive status effects hitting the characters, they take over the hex.

No matter the situation, battles are fast and exciting. This is especially true with the boss battles. Half of the time, bosses require you to slow them down, weaken them and lock them in a hex. However, others require a totally different strategy. I’ve only scratched the surface about all the possibilities in terms of battle. However, it is worth mentioning that by leveling up, your characters gain points that can be distributed to learn skills and spells earlier than they normally would. Doing so will reduce their their HP and MP, but the benefits of having a new ability earlier than usual is sometimes worth it. This customization allows for unlimited possibilities.

All the Trimmings.
Wild Arms 4 plays like a dream, and it presents like one, too. The PS2 shows off some highly detailed character models that have color, personality, great textures, realistic proportions, facial expressions and some of the best drawn anime sequences seen in the series. Needless to say, the graphics do not disappoint. Flashy spells and skills dominate the creative monsters. The music is a perfect mixture of upbeat, exciting songs and Wild West twangs. The opening theme is sure to get your adrenaline going. Obviously, Wild Arms 4 has a presentation that has all of the trimmings. Unfortunately, it does suffer from some lagging issues when the battlefield is full and palette swaps happen often.

I’m All “Four” It!
One of the issues with Wild Arms 4 is the length. The game can be over in about 25 hours, but this doesn’t include the vast amount of extra stuff to do. Monstrous optional bosses, a battle arena and a platform adventure can easily rack up an extra ten hours. Those who wish to see everything can spend up to 40 to 50 hours on it. The other issue with the game is that the graphics have a tendency to lag on a cluttered battlefield. Luckily, this rarely happens. Wild Arms 4 is nearly a perfect title. It’s a step in the right direction for the series and is a promising prelude to what’s to come for it. Fans of the series might be shocked to see the drastic changes at first, but the changes are all for the better. I recommend Wild Arms 4 to any fan of RPGs. The great story, wonderful characters, exciting battles, lovely graphics and music plus the amount of extra stuff to do is reason enough to go four-ward and pick up Wild Arms 4 today!