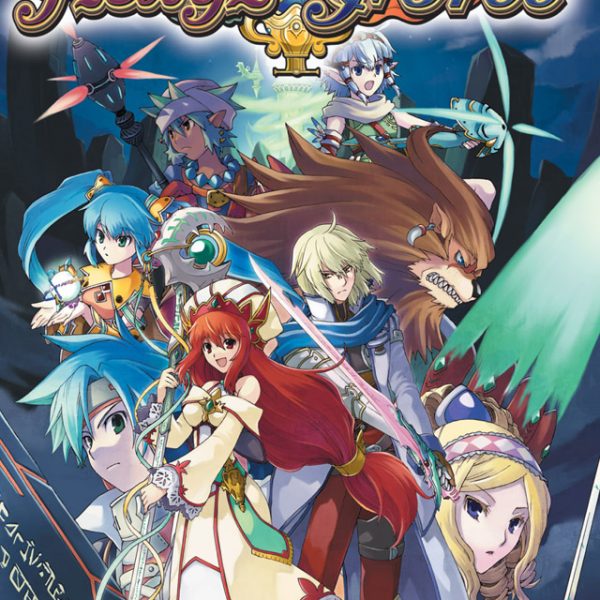 Author’s Note: This review was originally published on August 3rd, 2010. Like other reviews around the time, it features “witty” taglines to help separate each section. I was given Hexyz Force as a birthday gift and remember being quite impressed by not only its fun, but also its conventional approach to RPGs.

Sting has provided gamers with RPGs that usually take hours on end to grasp due to their steep learning curves. When you look at games like Yggdra Union, Baroque, and Knights in the Nightmare, you can see that individuality is something not lacking in Sting games. So, when they announced their latest project, Hexyz Force, I expected a game with such a unique title to have unique game play. Saying I was shocked to find out basic it was would be an understatement. Did going back to basics prove to be a good risk coming from a company that builds it’s career on risks?

Sum of its Parts.
After watching the well-drawn opening animation, one can see that the basic approach to the presentation was a good choice. The 3D environments get explored by detailed, super-deformed, and super-cute sprites that get accompanied by well drawn portraits during the conversation events. The downside was the vast amount of palette swapping used for the monsters. A few of the environments were barren, as well. It would have been nice to have taken less steps down winding corridors to reach my destination. This included the towns. A few extra people to speak with would have been nice. Luckily, some of these NPCs provided the characters with side-quests. Best of all, hitting the Select button brought up a map for those who could get lost easily. The music in the towns, dungeons, and battle were well composed and fitting for each circumstance. Unfortunately, they weren’t very memorable. The voice acting was sparsely used. Battle cries and victory sayings were the most common times you would hear the well-done voice acting. The same can be said for the excellent, but too infrequent anime cut scenes. Hexyz Force could have used some variety with a few parts of the presentation, but the big picture was greater than the sum of its parts.

Power to Create. Power to Destroy.
In the world of Berge, legend says Norvia, the goddess of creation, used the help of twelve divinities known as Hexyz to fight against the god of destruction, Delgaia. The forces of good overcame the forces of evil, but the twelve heroes were lost. All that remained of them were their sacred weapons known as Ragnafacts. Also, this giant war causes a monument called the Black Precipice to appear that separated Berge into Lustrous Berge and Dark Berge. Thousands of years later,in Lustrous Berge, a cleric named Cecilia was playing hooky and ended up inheriting the Ragnafact of Pearl Light. Meanwhile, in Dark Berge, a chivalrous knight named Levant becomes the holder of the Crimson Lotus Ragnafact. With the awakening of new Hexyz, it can only mean that Berge is once again given a choice: creation or destruction.

Once again, Sting went back to basics. The story in Hexyz Force was something seen many times before: a god of destruction may awaken and only the Hexyz can stop it. The basics stopped there, though. Cecilia and Levant may have traveled through the same world, and at times run into one another, but their quests, story characters, situations, and other subtleties were very different. Instead of a game like Star Ocean 2 where Rena and Claude had the exact same story, Cecilia and Levant had two different paths to follow. This added a substantial amount of replay value to the game. Most importantly, both heroes were accompanied by well developed characters. The overall story may have been something seen one too many times before (and there were multiple endings for both characters which has always irked me) but the individual parts were greater than the sum.

Fun for All. All for Fun.
A fun collection of ideas came together to make progressing through Levant’s or Cecilia’s quest more manageable. Battles begin when you run into a monster. The turn order is on the right side of the screen. Characters can wield both Ragnafacts and Spiritfacts. Attacking with a Ragnafact requires Ragna Points. More powerful attacks require more RP. Spiritfacts included weapons, healing items, and attack crystals. Instead of RP, Spiritfacts have durability and will break after being used enough times. Battles were over pretty quickly (mainly because of a nifty frame skip feature) but don’t think that some weren’t without a challenge. Button mashing half of the time would work but for the other half, you need to utilize aspects, the Hexyz Charge, and the Force Gauge. Aspects refer to attributes each Ragnafact and Spiritfact had. The three aspects were Cerulean Flame, Crimson Lotus, and Pearl Light. In a rock, paper, scissors fashion, each aspect is weak and strong to another. By using aspects in the right order, the Hexzy Charge would build and build. This makes attacks more powerful. Of course, enemies could contribute to the charge as well. Furthermore, as attacking continued, the Force Gauge would build up to three levels. Ragnafacts would unleash Burst Attacks with the Force Gauge. These were perfect for the tough boss battles. While you could use all of these features, most battles were over after a few blows were exchanged. Throw in some necessary healing on the side, and you have got your battle formula. Boss battles, obviously, require a bit more planning.

This is where the Force Points and the excellent item creation system came into play. When battles end, you will obtain FP and monster parts. FP were used to recover HP, power up Ragnafacts, and create items along with the monster parts. Items were also found in treasure chests and harvest points. Since there were no shops in Hexyz Force, the plethora of items, equipment, and accessories needed to be made. In fact, there were no inns. For full recovery, you needed to use Healing Springs that were generously scattered throughout Berge. These made leveling up a breeze. Full recovery also occurred upon a level up. Thanks to the above mentioned frame skip function, battles in Hexyz Force were a pleasure. The cycle of gaining FP, leveling up characters and making equipment was pleasant and helped stray away from just a simple battle system with nothing but button mashing. Unlike most Sting titles, the game play was easy to grasp. Was it easy to master? Yes. Was it easy to finish? With the exception of a few boss battles, yes.

Hoisting the Light and the Dark.
With two quests to play, starting the game with the second character was surprisingly fun. That’s what I did. I started with Levant and went through his quest in about 25 hours. Following that, I immediately began playing as Cecilia. Completing one quest unlocked Extra features. Completing both quests unlocked a hard mode. I don’t plan on trying to fill the collection to 100% or playing the game on hard. Still, for the 40 hours it lasted, Hexyz Force was a surprisingly fun, yet simple, game to play. Unlike most Sting titles, it didn’t break any ground for RPGs. Instead, it took basic ideas and presented them in a way that was accessible, but still had a fair share of challenging moments. I recommend PSP owners looking for an RPG to pick up this title. While it lacks the individuality of a Sting title, it delivers a solid RPG experience in the end.