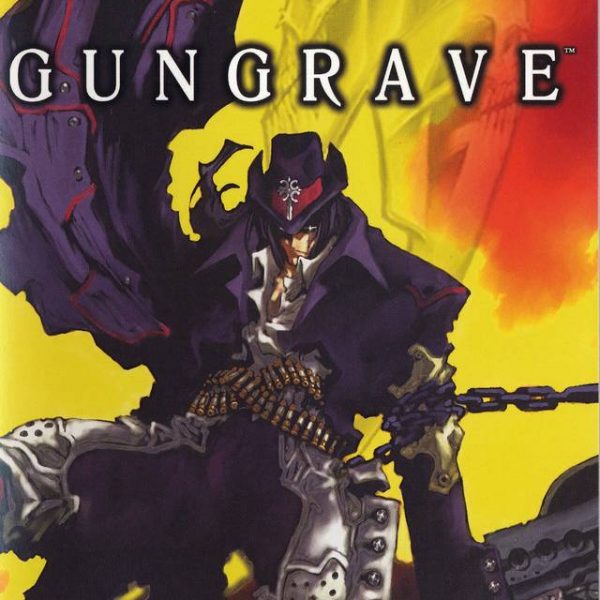 One of my first PlayStation 2 titles was Shinobi. It was a difficult but rewarding game that still provides a good time in small or large doses. When I was first playing all of those years ago, I was discussing its difficulty with a friend of mine. Said friend decided to check out the game for himself and gave me a recommendation for a game he was currently enjoying. That game was Gungrave. Funnily enough, Gungrave was advertised on in the instruction manual for Shinobi. It’s a shame I waited so long to play Gungrave for two reasons. The first is that it’s a fun game. The second is that Gungrave has a pricey fee for those that wish to give it a shot. When the PlayStation 2 was a current gen system, Gungrave was everywhere and would cost the price of a cheap meal. These days? Not so much. Is Gungrave’s short length worth the cost?

Gungrave takes place in a futuristic city that is ruled by an organization called Millennion. Years before the story begins, our hero worked for this organization. Naturally, our hero was killed due to some backstabbing and conniving. However, he’s returned from beyond the grave in order to get revenge and to protect a girl named Mika. Mika was affiliated with the organization. The story is simple: take control as Grave in order to slowly bring down the higher ups of Millennion and, ultimately, get your revenge on the man that killed him. The narrative is strong despite the game’s short length. Between stages, you can talk to Mika and Graves friend, Dr. T. Both always have something to say, which helps balance Grave’s silence. Most of the villains don’t get as much development, but they still get a few words in before attempting to put a stop to Grave’s mission.

Gungrave is divided into six stages, most of which end with a boss battle. At a glance, Gungrave looks like a typical third-person action game. You will move Grave through narrow hallways or open spaces as waves of enemies attack you with both melee and ranged weapons. Grave uses twin handguns called Cerberus to fire an unlimited number of bullets at foes. If enemies get to close, he can use the giant coffin attached to his back to perform a circular sweep and knock away enemies. By using these two weapons and demolishing anything living or inanimate in his way, you will build up a Beat Count. High Beat Counts build up a special Demolition Shots that can be executed with the triangle button. These are limited, but very powerful. The action never stops as countless scrubs make an attempt to stop Grave in his tracks. Grave will fluidly move as he fires his twin guns, swings his coffin and pulls a rocket launcher out from his coffin to decimate hordes of foes. Pressing the Select button will cause Grave to perform a stylish pose. It doesn’t do much, but it’s satisfying to watch. A boss will wait for you at the end of the stage.

Bosses aren’t as fun as the stages. It’s not that they’re not well designed or too difficult; it’s just that the controls don’t work well for what the developers were going for with their design. One issue is with Grave’s health. Grave has a shield meter that slowly regenerates and a health meter that will start to drain when the shield meter empties. There are no items to pick up in Gungrave. The only way to recover health is to use one of those Demolition Shots. Luckily, Gungrave has a generous checkpoint system so there’s never any need to worry about starting a long stage over again. The real issue with boss battles is that Grave, usually, moves like a literal and figurative tank. While he can run with the push of the O button, Grave is a slow, clunky character. Bosses are much faster than him. Bosses hit much harder, too. It becomes very difficult to dodge attacks and deal damage to the bosses. You’ll see the game over screen more times than you’d expect for such a short game. Still, when things seem to work, the boss battles can be fun. During some boss battles, you can use a Demolition Shot to perform a cinematic, over-the-top finishing move that makes all of the struggling seem like a distant memory. Really, a better control scheme would have gone a long way and made them close to perfect.

Gungrave looks gorgeous and unique. Aside from Grave firing bullets in every direction and performing choreographed overkills, the enemies, stages, and atmosphere look stunning. Some heavy hitting anime artists took artistic control of Gungrave and the results look great. The story gets revealed through beautifully animated cut scenes. The music isn’t as memorable, but it serves the game well. The vocal track that plays during intermissions works well for both easy-listening and for getting you pumped for the next mission. The entire game is voiced in Japanese and it sounds fantastic.

Other than some clunky controls, Gungrave’s biggest flaw is that it’s short. You can finish the game in about five hours. There are multiple difficulty levels, bonus items to collect and some other secrets to uncover, but the core game will be over before you know it. I know I’ll be going back for more to try to beat my scores and try the more challenging levels of difficulty. So, is it worth the price? If you enjoy the game and plan to play through it multiple times, then it’s worth it. If not, then you’ll need to find your third-person action fix somewhere else.

Overall, 7/10: Gungrave is a fun and festive frolic of firearms. It just ends too soon.