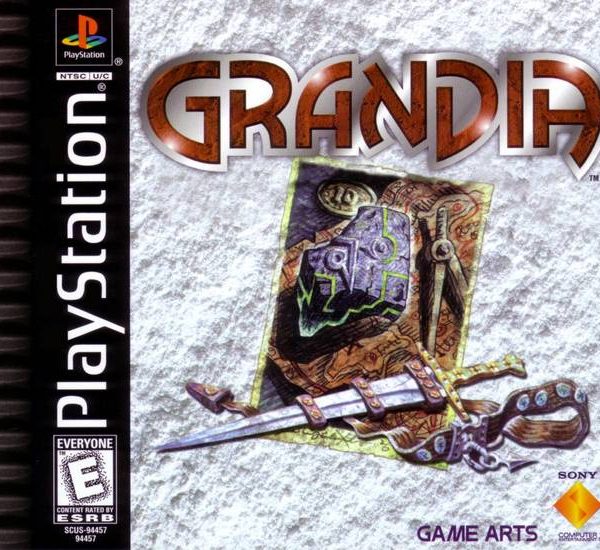 Author’s Note: This review was originally published on August 17th, 2009 and features the “witty” taglines I often used to separate each section. I remember receiving Grandia as a Christmas gift long before I wrote this review. I’m glad I gave the game a second chance.

If you have read my Legend of Legaia review, you will see that I played the game for a while, stopped because I didn’t like it, and then finished it years later. Upon finishing it, Legend of Legaia turned out to be a great adventure and worthy addition to my PSX library. The scenario is exactly the same with Grandia. I played it when it was first released, couldn’t finish it, and then played it once more again. This time, I was able to finish the entire thing and, like Legend of Legaia, thoroughly enjoyed it. While Grandia is far from perfect, it is still an exciting adventure that any RPG player will enjoy.

Justin Time!
Man, that tag-line was painful to type. Anyways, Grandia begins in the small port town of Parm. It is here that Justin, a rambunctious little scamp, dreams of going on grand adventures across the world. He and his best friend Sue end up in the Sult Ruins, where a mysterious voice speaks to him saying that he must travel to the lost world of Alent. With the Spirit Stone, a memento of his father, Justin embarks on an incredible journey far and wide as he uncovers the secrets of a lost civilization.

While the plot sounds simple, it turns out to be endearing. Justin, while obnoxious at times, turns out to be a fun hero because of his desire to see the world. Kids these days just don’t share that kind of drive. Following Justin and his friends gives you a sense of accomplishment, because he overcomes obstacle after obstacle with a smile on his face and a sense of duty in his heart. Ouch, that was also painful to type. But, seriously, the story in Grandia is an uplifting one that shows you that having a sense of adventure is an important quality. One last thing to mention is that Justin meets an awesome cast of well developed characters on the way who join him in his adventure. Besides Sue, he meets up with the beautiful Feena, the mighty Gadwin, the juvenile Rapp, and other fun characters each with their own personality, past, and identity.

Land of the Lost.
After the initial story sequences end, you gain control of Justin as he travels through the “small port town” of Parm. In actuality, Parm is a huge town with tons of pathways, houses, shops, and roads. The same can be said about nearly every other location in Grandia. Towns are huge, and there are times you will get lost. However, this feature adds to the sense of adventure and accomplishment in Grandia. Remember, Justin is a young boy, and for him to travel through huge, vast cities after coming from such a “small port town” adds to the sense of adventure and accomplishment.

While the towns have shops and plenty of townsfolk with plenty to say, you will find the dungeons to be where the real fun begins. Before I talk about battles, I will talk about your characters and the dungeons themselves. Justin and his friends have plenty of customization options available. Most characters are proficient with more than one type of weapon, and continuous use of a weapon increases statistics. When certain levels of each weapon are reached, new skills are learned. The same holds for magic, which gets learned through the use of Mana Eggs. While the initial spells are less than exciting, continuous use of them will unlock insanely powerful spells. In the end you are left with characters owning tons of options for enemy disposal. Speaking of enemies, time to focus on the dungeons.

Often times, they have simple puzzles to solve. Other times, they are giant, endless plains of grass that have no boundaries, and cause you to, once again, get lost. Regardless, the goal of them is the same: get to the end. You always have a handy-dandy compass on hand that points you in the direction of the exit. Your team members follow you in a caterpillar fashion. As you trollop through the mountains and valleys, you will see enemies. If you touch the enemy while it’s unaware of your presence, you will get the initiative in battle. If you touch the enemy after it sees you, the battle begins normally. Finally, monsters can gain the advantage if they touch someone following Justin. Regardless of contact, battles in Grandia are exciting and fun.

Swords, Sorcery, and Snarl.
Battles in Grandia use a very unique combination of turn-based and real-time, both of which come together to form a fun and exciting system. After you encounter an enemy, you will see a meter at the bottom of a screen and your character’s portraits and stats on the top of the screen. At the bottom, everyone participating in the battle is represented by an icon. When the icon of one of your characters reaches a certain point, time stops and your command window appears. You can now select what to do. You can defend, move away from the enemy, use items, use magic, use killer moves, or use one of two types of attacks. A combo attack hits an enemy twice, and a critical attack knocks back an enemy on the meter, thus doubling as a cancellation move. With skills and magic, you have to wait for the command to charge. This means that the icon has to reach the end of the meter. Then, it will get executed. With all of the commands to select and the distance of the enemies to take into account, battles in Grandia can get awesomely hectic. Later in the game, when you learn more powerful skills that hit all enemies on screen, the game becomes an absolute cake-walk. In fact, Grandia is one of the easiest games I have played in quite some time. There was no need to grind to level up or learn new skills, but it happened anyway due to the fun nature of the battle system. It also happened due to the abundance of save points that also serve as full recovery stations.

When the battle ends, you get money, sometimes items, and experience points. Typical stuff. One thing that I should mention is that characters can only hold twelve items a piece, making item management a real pain. Another problem with the game comes with having two of your characters becoming insanely powerful in comparison to the others after a certain point in the game is reached. Still, the unique battles in Grandia never stopped being fun.

Cinnamon and Sugar.
With 2D sprites and a fully-rotatable 3D world to explore, Grandia is the perfect combination of graphics. The sprites themselves look wonderful, with plenty of colors and expressions. Even better is all the character portraits you see when your characters converse and interact with each other. If you do purchase Grandia, you will see that the back of the box mentions all of the civilizations you encounter having their own unique architecture. The box tells no lie, for all of the game’s locations not only look unique, they look well designed. Clearly, the developers wanted to give each area their own sense of identity and culture, and they succeeded in this department.

Say It Ain’t So…
Grandia features voice acting during certain story sequences and during the battles. Most of the voice acting was done well, but Justin’s voicing needed work. Lots of work. The stuff that comes out of his mouth and the expression of it hardly befits a young man ready for action. Also, some of the things that the characters say for their battle cries are a bit ridiculous. “Oh, wind! Twist like a tornado!” That’s an example right there. Still, it was a nice touch. The music was done very well, especially with the boss battle tracks.

Adventuring Again.
Grandia took me 45 hours to finish. The game is very linear, with only three bonus dungeons. However, does that mean I will not come back to it? Absolutely not! While it may be years before I touch it again, I can say that Grandia was a blast to play and I’m glad I gave it a second chance. Grandia is all about accomplishments. Justin is what every little kid should be growing up. He has ambitions, dreams, and a desire to get out into the world and see all it has to offer. By the time the game ends, Justin becomes a worthy hero. Grandia does have certain bugs that should have been dealt with, especially the limited item inventory. However, the end result is something all RPGs should be about: a fun adventure.