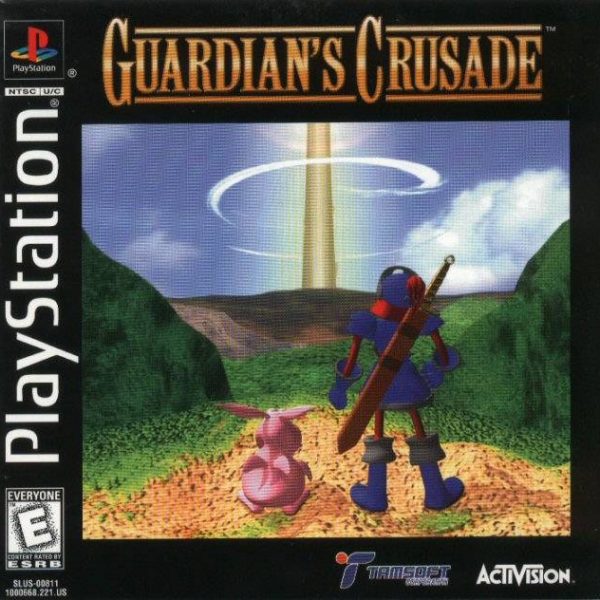 Author’s Note: This review was originally published on May 19th, 2010. Like other reviews around this time, it features “witty” taglines that separate each section.

My friends and I agree: the golden era of the RPG was during the Playstation’s life. Unfortunately, you will find that not all titles during this era were perfect tens. Guardian’s Crusade is a prime example of this. The biggest problem with this RPG is that it was boring to play. There were a few original ideas thrown into it, but the formula was so basic, so stale, it makes the game recommendable only for those who wish to get an idea of how the RPG genre plays. Heck, even that’s a stretch.

Hit Me Baby One More Time!
Guardian’s Crusade takes place in a fairytale setting where magical things can happen. The star of the story is a warrior named Knight. Yes, the main character is named after what he is: a knight. Luckily, you can change his name if you so desire. Knight (sigh) and his fairy friend Nehani are running errands for the king when they happen upon a mysterious creature that looks unlike anything their world has ever seen. Actually, it looks like a baby hippo that jumped into strawberry milk. They end up taking in the creature and naming it Baby. As caretaker for Baby, Knight embarks on a magical journey. Which is fine. I love magical journeys. In fact, the setting of Guardian’s Crusade was a whimsical one that is meant to be lighthearted. Sure, there was a lack of character development and thought provoking scenarios, it was still a cute tale. The problem with the story was progressing it. Before I talk about that, I’ll focus on the game’s presentation.

Hard Clay.
The polygon character models and environments worked well for further enhancing the fairytale setting. The best thing were the gorgeous and multiple colors used. The worst part? Most of the environments look like they were clay crafts made in a kindergarten art class. Dungeons and towns have a simple design and, due to their length, become a bit bland over time. The monsters you face, as well as the battle effects, worked well for the game because of their simplicity. Nothing ground breaking here.

No Need for Nursery Rhymes.
Keeping up with the setting and graphics, adorable music fills the game. This is even true for the battles. Unfortunately, the music is forgettable. In fact, I cannot recall a tune that stood out. You won’t mute your television, nor will you be hunting down this game’s OST. In terms of sound effects, Guardian’s Crusade features some darling ones. Again, nothing memorable but they work for the game.

Baby Got (your) Back!
Town exploration is basic RPG fare. You can shop for items, weapons, and armor. Taking a cue from Monster Rancher and Pokemon, you can morph Baby to be your friend or enemy depending on how you treat it. If you send Baby to go out and search for some items you better give it a reward. Otherwise, his performance in battle will be negatively effected. If you don’t reward it properly, then it may not take action the way you want it to. While an interesting idea, it can also be difficult to deal with because there’s not an easy way to gauge how Baby will respond to certain actions. Town exploration is also cumbersome due to the fact that most towns are large and Knight runs at a slow pace. Those gripes aside, setting outside of a town means entering an area where battles occur. This, my friends, is where the game’s score plummets to irretrievable depths. Battles are boring. SO BORING! After touching the spermatozoa looking enemy, you will engage in the most bare-bones turn-based battle system I have ever played. Battles are a real drag, which is a shame because these are the most important part of any RPG. Sure, you can summon Living Toys, which you collect throughout the world, to help you out in battle. Unfortunately, these critters make the battles even more boring because it’s another button press for another annoying enemy to overcome. Guardian’s Crusade is a very easy RPG, recommended only to those who are interested in the genre.

Corner Critters.
Guardian’s Crusade was not meant to be a serious, dark, or convoluted. It was not meant to break ground or become an institution for the next generation of RPGs. It was meant to be a lighthearted adventure. For the most part, it was. Unfortunately, it was boring because of the battles. Battles were too slow paced and basic. It seemed that they were there just to take up play time, which is around 30 hours for the main quest. Despite the monster raising elements and adorable setting, it’s hard for me to recommend Guardian’s Crusade unless you’re brand new to the RPG genre and want to get an idea about it. On the other hand, those wishing to get into the genre have a huge variety of options at their disposal and can easily overlook Guardian’s Crusade. The answer should be obvious: try something else instead of Guardian’s Crusade. Pardon the cliche, but t’s time that someone puts Guardian’s Crusade (and Baby) in the corner.