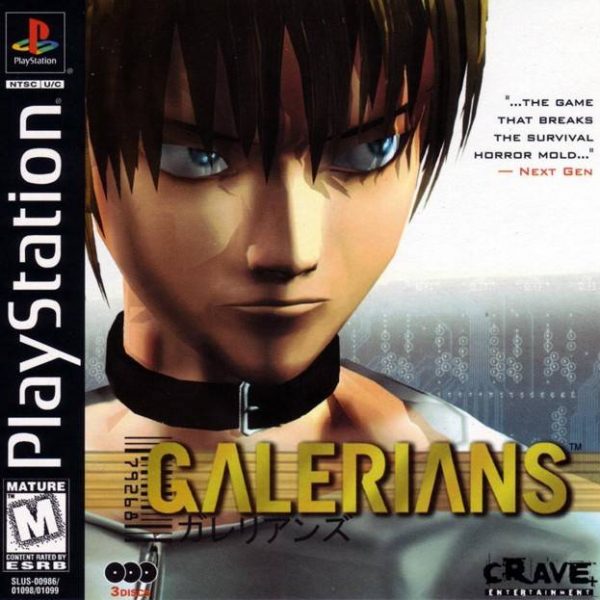 Something I always do before playing a game for the first time is read its instruction manual. Not only will I get a better understanding of what to do, but I’ll get an introduction to its story, characters and features. Galerians for the PlayStation was no different. As soon as I got the game, I read about Rion and his quest and what was required of him to make it through this survival-horror game. The more I read, the more excited I got. When I finally popped in the first of three discs, I watched the opening movie and events with excitement. And then…I started playing. Things started to slowly but surely go downhill from there. Galerians looks like it would be a unique game in a genre was starting to gain some footing due to Resident Evil. Unfortunately, it misses the mark and falls more than Rion does when he gets attacked.

One thing that Galerians does have is a great presentation. Released during the PlayStation’s prime, Galerians really pushes the hardware to display impressive cinematic movie, detailed pre-rendered backgrounds and expressive character models. There is a plentiful amount of FMVs in the game and they do a good job at moving the story along. In fact, I would say that the graphics in Galerians are some of the best that the PlayStation offers. The music takes a backseat in Galerians. Since the ambience of a survival-horror game does better without music, this choice works. Certain events have music playing, but it’s nothing memorable. Unfortunately, when music is playing, chances are that you’ll hear the voice acting. This has got to be some of the worst voice acting in video game history. It’s not even one of those incidents where it’s “so bad, it’s good.” It’s terrible; there is nothing redeemable about it.

The bad thing about this is that the character who is voiced the worst is the one who you control. Galerians tells the story of Rion in the futuristic Michelangelo City. Rion wakes up in Michelangelo Hospital after hearing the voice of a girl asking to save her. As luck would have it, Rion has no memory of who he is and soon discovers that he has the ability to use psychic powers. His powers become further enhanced every time he takes drugs called PPECs (Psychic Power Enhancement Chemicals). Rion doesn’t know what’s going on, but staying inside a hospital is the last thing on his 14 year old mind. With the discovery of his new powers and the voice of the girl guiding him, Rion has to escape the hospital and find the truth about the voices in head, his powers and the mystery behind a super computer named Dorothy. While there isn’t much of a horror element to the game’s story, the sci-fi setting and events surrounding Rion and his circumstances are unique for the genre. You’ll be routing for Rion because his ordeal is terrible.

Things don’t look good for Rion. If you decide to play this game, then things won’t look good for you, either. This is because Galerians uses the infamous tank like control scheme (similar to Resident Evil, Parasite Eve II, etc.) that causes more frustration than it should. Rion can move forward by pushing up on the control pad. He turns by pressing left or right. He’ll backpedal by pressing down. It’s a control scheme that I never enjoyed. It’s a shame Rion isn’t more maneuverable because the odds are always stacked against him and his powers aren’t as prevailing as you would expect. Instead of relying on melee or ranged weapons, Rion must deal with his multiple adversaries by tapping into his new powers. Rion has the ability to use three types of abilities, all of which have limited use until he injects himself with restorative drugs: a psychic blast, ignition and anti-gravity.

It sounds like he would be unstoppable, but Galerians emphasizes fleeing instead of fighting for a variety of reasons. First, using your power requires you to charge an attack. When an enemy is shooting at you with powerful projectiles or bum rushing you with their body armor, getting a focused attack to land takes precise timing. Second, enemies don’t drop restorative items. Every location has a fair amount of consumables to find, but Rion’s limited item pouch means you have to carefully plan what you use, keep and/or leave behind. Third, each use of Rion’s abilities causes his Anger Points to rise. Once his AP meter is full, Rion will short. Merely looking at most enemies will cause their heads to explode, but Rion’s energy will slowly whittle down to nothing. Shorting doesn’t work on bosses, either. Fourth, Rion is frail. Getting hit usually results in him getting knocked down to the ground. By the time he gets back up, chances are the enemy will be knocking him down again.

If you can’t tell, Galerians is a difficult game that feels cheap instead of challenging. Sometimes, Rion won’t have any choice but to fight so you’ll have to put up with all of the above mentioned issues. Boss battles need a special mention because these are absolutely brutal. Due to the tank like controls in Galerians, dodging bosses and their relentless attacks requires tremendous effort. Landing a hit on them requires more effort. Killing them requires even more effort due to their durability. Rion doesn’t improve over time. He doesn’t learn new abilities or find new powers. What you have at the start of the game is what you’re stuck with until the credits role. Some will welcome the challenge, but every encounter with an enemy is struggle.

Despite this, I kept coming back for more punishment because there are some neat things in Galerians. Rion will explore some eerie locations and solve some fun puzzles. Many of the key items you uncover will explain more about Rion’s past and the deal with Michelangelo City. And, there are times when combat is actually enjoyable. There is no denying the sense of victory you’ll feel after a boss finally face-plants. Even with all of the struggling, Galerians can be finished in about five to six hours. The three discs don’t have as much content as one would expect, and the strict linearity means that each location can never be revisited. Finishing the game doesn’t unlock bonus content. There is only one difficulty level. And there isn’t much reason to replay the game since there aren’t any secret areas to uncover. In other words, you’ll be done with Galerians for good once you finish the game the first time. That is, of course, if you even bother to try it in the first place. This is a hard game to recommend, even to fans of the survival-horror genre. I can overlook terrible voice acting if the game is fun to play. Unfortunately, tank controls combined with unfair odds make playing Galerians a headache. While you can pop some drugs to alleviate a headache, you’re better off remaining drug free (unlike the folks in the Galerians world) and checking out something else.

Overall, 4.5/10: Galerians sounds like it could be as fun as an acid trip, but instead it’ll make you feel like you’re going through withdrawals.