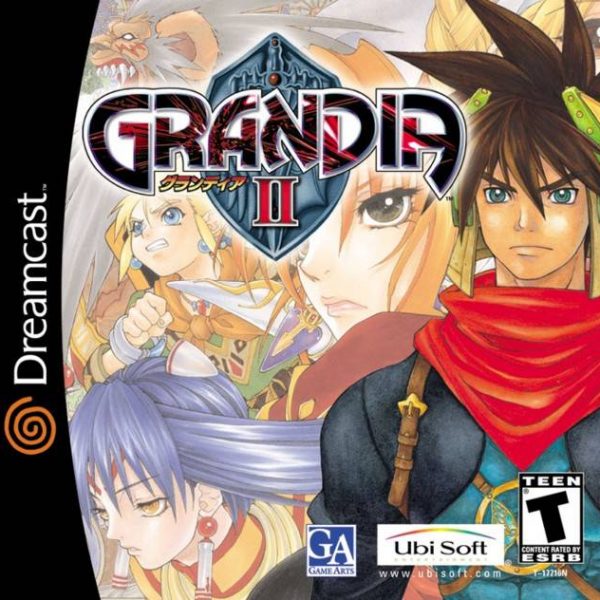 When Grandia II was first released on the Sega Dreamcast, I had no interest in it because the first Grandia was, at the time, a disappointment. Years later, the game got ported to the PlayStation 2 for a cheap sticker price. Like any fan of the RPG genre, I took the plunge and hoped for the best. Most people call the PlayStation 2 version of Grandia II “A terrible port of an excellent game.” Truer words have never been spoken because I finally had the opportunity to play the original Dreamcast version of this classic RPG. Even with me knowing how the story would unfold and how to abuse the battle system, replaying Grandia II on its original home has been an absolute treat and I recommend it to all fans of the genre.

Grandia II takes place in a world in which the people weave tales of a legendary battle between good and evil. Granas, the god of light, fought in an epic war against the god of death, Valmar. After the seemingly endless struggle, Granas emerged victorious. While the world ended up scarred and mangled, people thanked and worshipped Granas. In the present day, a songstress named Elena is no exception. Her church hires the cynical and smart-mouthed Ryudo to ensure her safety as she makes a pilgrimage to Granas’ various places of worship. Ryudo’s job appears easy on the surface but there is more than meets the eye as he reveals the truth about the gods and himself.

Grandia II’s story is the furthest thing from original. A god of light and a god of darkness have been plot points long before Grandia II was an idea. That said, the story still manages to be entertaining because of Ryudo and the rest of the cast. Developed by Game Arts, Grandia II has fantastic writing that will keep you hooked in every circumstance. Ryudo, Elena and the rest of the well-developed crew have plenty to say. This is especially true when you sit down at the dinner table with them; something that was a fan favorite in the first Grandia. But the fun doesn’t stop there. Every townsman and townswoman, shop owner, villain and even non-speaking animals will offer paragraphs of well written dialogue. Unfortunately, even the solid writing can’t save certain story events from making an attempt at being dramatic to campy.

That said, you’ll have no problem about moving the story forward if it means exploration is not too far behind. Ryudo and his team explore towns, caves, alternate realities and other fantasy inspired locations. In towns, you can shop for equipment and items. The obnoxious inventory management system from the first game was, thankfully, removed. Most players will want to get through the town as soon as possible so they can get to a place where monsters roam. While the world map of Grandia II is nothing but a point and click screen, it won’t matter when battles begin.

Grandia II’s battle system combines the best of turn-based commands with the best of real time action. Players will select an action and watch it play out as a character icon representing them on the bottom of the screen reaches the end of a meter. These can be instantaneous such as a combo attack or critical attack, or they can take a while to charge like a spell. At first, with only a couple of characters, battles may not be as involved. As you get more characters, learn new spells, unlock new skills and power up your characters with Magic Coins and Skill Coins, you will end up with copious options for laying waste to enemies. Boss battles are especially fun since each boss has a variety of parts that each have their own commands. Do you have your character’s turn be used for a critical attack to cancel their command? Do you use a spell and hope the charge time is less than the boss’s? Do you attempt to stun it with a combo attack? Either way, watching the action unfold in real time is impressive. Grandia II’s battles are enough to warrant playing the game.

Of course, stunning visuals and great music don’t hurt matters, either. The Dreamcast’s capabilities have been put to good use in Grandia II. Expressive 3D characters with fantastic 2D character portraits make a great combination. Ryudo’s quest takes him to imaginative environments with colorful inhabitants or ferocious monsters. The spells and skills that get used by both friend and foe alike are entertaining and learning something new is exciting not only because it could be helpful in battle, but because you get to see how it looks. Grandia II also features a solid amount of voice acting that, for the most, sounds good given the time of its release. The music more than makes up for any of the shortcomings, though.

Grandia II is about 30 hours. This short length might divide gamers, but for me, it felt like an average length. I would have liked to have seen more. Some side-quests or hidden dungeons would have been welcome. Also, by the time you reach the half-way point, the game’s difficulty starts to decrease. Challenging enemies would have helped in making the battles even more strategic. Grandia II’s biggest flaw is the story. While the solid characters help carry it, they can only do so much for some cheesy events. Despite these complaints, I recommend RPG players check out this version of Grandia II. Unlike the PlayStation 2 version, the Sega Dreamcast version lacks slow loading times and lagging motion.