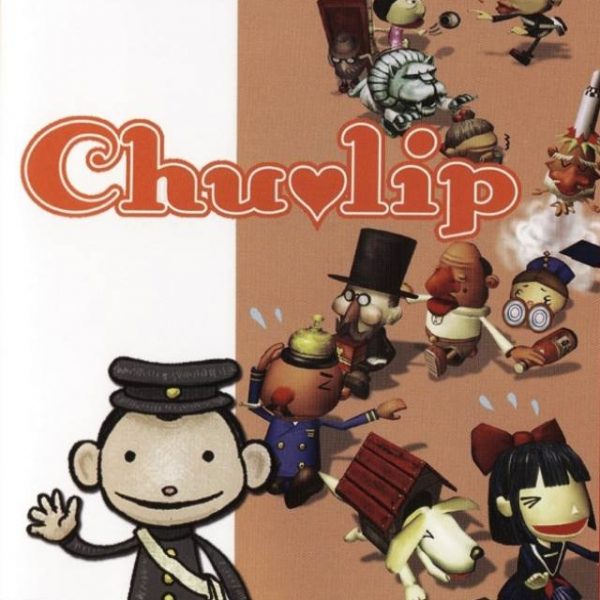 I want you to think of the strangest game you’ve ever played. Now, multiply its strangeness a few times. Chances are you’re nowhere near the levels of strange that Chulip reaches. The thing is, it’s that same level of strangeness that makes the game so enjoyable. So, why did it score low with critics and sell so poorly? The reason was that its quirkiness wasn’t enough to compensate for the faulty gameplay. Chulip is frustrating; it requires a level of patience that most gamers don’t have. I’m glad I’m not one of those gamers because seeing Chulip through to the end was a one-of-a-kind experience.

Even Chulip’s name should be enough to make you aware of all the quirkiness going on. The “chu” refers to the onomatopoeia the Japanese use when describing a kiss, kind of like how westerners use “mwah” or “muah”. The “lip” refers to the lips. If you put those together, then you get something that suggests kissing on the lips. That’s the goal Chulip: kissing others on the lips. The game puts you in the role of a young boy who has found the love of his life. After this boy and his father move to Long Life Town, he encounters the girl of his dreams and wants to plant a kiss on her. Unfortunately, his poor reputation and inexperience aren’t impressive to this young lass. In order to live happily ever after and get that kiss, you need to guide this boy as he learns about love, writes the best love letter he can, and practices kissing with as many residents of Long Life Town as possible. Does it sound strange? That’s because it is, and it only gets stranger.

Long Life Town is filled with eclectic and quirky residents. There’s Batayan, an unemployed musician that knows everything there is to know about cicadas. There’s the jade lion Leo, the owner of a bath house that loves to make tea by blending the ingredients together in his mouth. There’s Goro, a drunken film buff who is in an unhappy marriage with this wife. There are tons of hilarious personalities in Chulip, and the fun thing is that you can land a kiss on all of them. Long Life Town residents aren’t the only ones you’ll get to know, though. There are Underground Residents in Long Life Town that follow their own schedule and rules that are just as kissable. A man with bondage fetishes, a Chinese acrobat that helicopters through the air, a business executive, a robotic sniper, and so many more Underground Residents can be sought for a kiss. Long Life Town and its lower quarters create a setting like no other, and exploring it is a fun experience.

Unfortunately, it can be a frustrating one, too. After the initial scenes, you are tasked with recovering three pieces of a love letter set so you can write the perfect letter to your dream girl. Sounds simple, yes? Well, there are some snags. The first is that you’ll need money to be able to move to the various sections of Long Life Town. To get money, you can either search trash cans or kiss Underground Residents. Both of these options have problems. If you search a trash can, there’s a chance that you’ll discover some excrement. This causes you to lose health. Kissing Underground Residents is more rewarding, but also much riskier. In order to land a successful kiss, you need to wait until musical notes appear above their head. The timing for these kisses is very, very strict. If you mess up, then you lose health. Usually, the amount of health you lose is enough to give you a game over. This means you’ll have to restart at your last save. Save spots are limited; you’ll need to risk a kiss if you wish to unlock more of them.

Kissing Underground Residents is also required in order to unlock items needed to get further in the main story. Most importantly, kissing them will help with your kiss count. Kissing just doesn’t play a role in making you a profit; it’s the only thing that will increase your health. Every time you rest at your house, your total kiss count will be checked. If you reach a quota, then you’ll earn more health. It sounds straightforward, but the sensitive controls and the high risk involved with puckering up means you’ll be looking at a lot of frustration.

We aren’t even taking into account that everyone in Chulip has a schedule. Similar to games like Radiata Stories, time is always ticking. There aren’t many ways to fast forward time, so you have to plan your trips properly. Oh, and did I mention that examining the wrong object will cause you to lose health? Did I mention that the kissing requirements for some of the Long Life Town residents are heavily reliant on RNG? Did I mention that sometimes your character will get knocked down and the game will glitch when he tries to stand back up? There’s a lot working against Chulip.

I’m guessing that the more you read my review, the less likely you’ll be to give it a try. But, despite my griping, I actually enjoyed playing Chulip. Landing a kiss on someone that you’ve been working on is a rewarding experience. Seeing your hard work pay off as your health increases makes you feel fearless; you can seek out new folks to kiss and not worry about the health penalty. Advancing the story involves some critical thinking, which makes the game feel even more rewarding. At some point after another game over, things in Chulip just clicked and I started to enjoy it. I learned how to plan my voyages through Long Life Town and its surrounding areas. Before I knew it, I was at maximum level because I kissed everyone available. 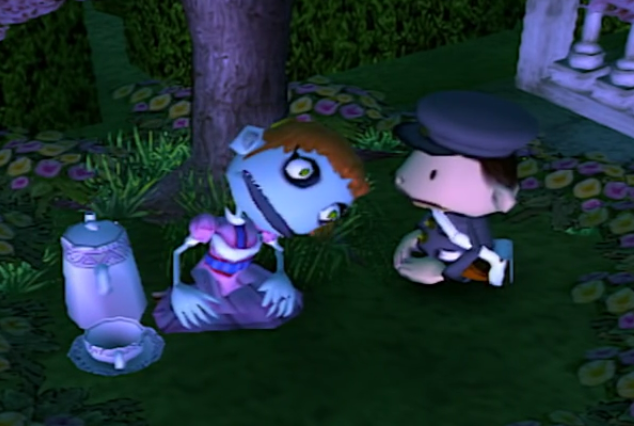 It takes a lot of effort and health to land a kiss with this girl, but come on. Look at that face. How can you not want to kiss her?

One of the reasons why I wanted to kiss everyone was so I could see the Chulip world in its entirety. Chulip’s graphics can best be described as an amalgam of chaotic fun. They combine cuteness, weirdness, grossness, and distinctiveness. The colors and textures are at a standard PlayStation 2 level, but there is no other game out there that looks like Chulip. Similarly, and perhaps fittingly, there is no other game that sounds like Chulip, either. The soundtrack combines barbershop quartets, kazoos, raspy jazz singers, opera, and more. The tunes are catchy and will have you humming along. Finally, everyone in the game is voiced. But, not the way you’re thinking. The characters voices can best be described as using a language that combines Japanese and gibberish. It never stops being amusing.

Despite all of my game overs, I was able to finish Chulip and see just about everything in one weekend. It’s short playtime is a benefit, but I wouldn’t have minded if the game lasted a bit longer. I’ll be the first to admit that Chulip is riddled with problems and annoyances. But, if you do decide to give it a look, then give it a fair chance. One thing that is worth noting is that Chulip’s instruction manual has a mini-strategy guide included. If you want a physical copy, then make sure you get it with the manual so you can get an idea of how to plan your kissing conquests. I’m glad that I went through Chulip. Obviously, it makes me appreciate games that have better gameplay. But, more importantly, I was able to experience a game that is completely different from everything else out there.

Overall, 6.5/10 – A small sample of gamers will appreciate Chulip. If you’re able to overlook it’s poor design choices, then pucker up. A funny, quirky, and unique game is waiting for you.