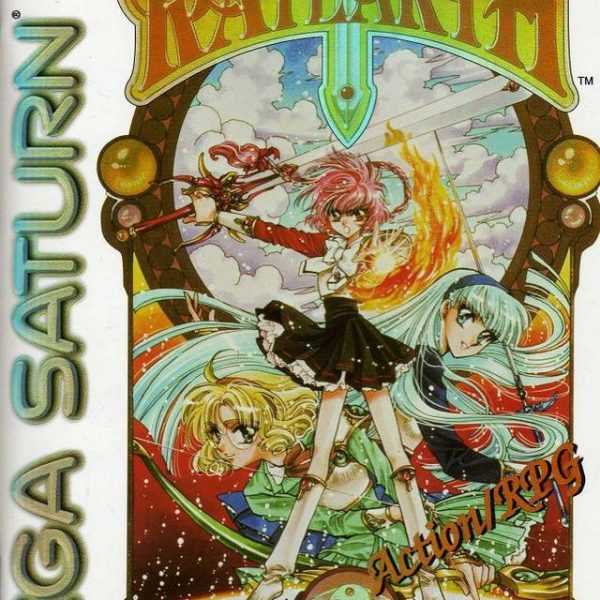 As you can see, I rated Magic Knight Rayearth a nine out of ten. One of the things make the game shy away from perfection is its length. I’ll throw it out there right now: you’re looking at only 15 to 20 hours of game time. Another issue with the game is the translation. Working Designs is known for having a tendency to go over the top with their translations. Magic Knight Rayearth is no different. The original manga and anime never used the toilet humor, innuendo and crass language that the video game shows. That said, the new story will feel familiar and fresh to you. It begins in Tokyo Tower. Hikaru Shidou is on a field trip with her junior high classmates and ends up meeting Fuu Hohouji and Umi Ryuzaki while chasing a puppy. Suddenly, they hear a voice, beckoning them to save an unknown world. The voice disappears and they end up in Cefiro. They meet with a wise sage named Clef, who informs them that they are destined to become Magic Knights. The story will feel familiar to anyone who has experienced Magic Knight Rayearth before. Once the Forest of Silence ends, a brand new quest unlike anything you have seen from the series will begin to unfold. The three girls will meet brand new characters as well as some familiar villains. The premise of the story is the same, but the events that occur during their quest will be different from what is expected. On a personal note, I was mad that certain names were changed. Purist complaints aside, the story is a magical one that perfectly fits the Rayearth name.

The graphics in Magic Knight Rayearth are stunning beyond compare. It begins with the 2D perfection that only a video game based off of an anime could pull off. Besides vivid sprites with more color than a bowl of Lucky Charms, the three gals will explore a variety of unique locations that really pop thanks to the Saturn’s 2D capabilities. Since there are new additions to the story, the game comes with a respectable batch of new animated cut scenes made just for the game. There is plenty of excellent animation shown in Magic Knight Rayearth that drives the plot further. But, for every plus, there happens to be a minus. I’ll start off by saying that the music in Magic Knight Rayearth is wonderful. Now for the bad news: the voice acting is mediocre. Hikaru, Fuu and Umi sound nothing like their anime counterparts. At times, they sound silly. Yet in battle, they retain their original Japanese voices. The thing that gets me the most worked up is the new set of lyrics to the opening you know and love from the anime. I understand that trademarks, licenses and all that jazz create sticky situations, but the creative folks at Working Designs could have picked better lyrics. I’m sure you can find the opening on youtube somewhere. I almost began a drinking game with that song: take a shot every time you hear the word “bold.” I’m getting off track, but the moral of this section is that the graphics are flawless, the music is sublime, but the sound needs work.

Taking control of Umi and the others requires no work because this game plays like a dream. As you move the three girls around towns and dungeons, you can switch the lead character on the fly. One of the greatest features is that each of the girls’ personalities shines when they examine an object. Hikaru will say something about a random fountain, but Umi and Fuu will say something different. The best part is that nearly everything can be examined and you can gain more insight on everyone’s unique personality. Furthermore, each girl keeps a picture diary that can be narrated to you. Their diaries reflect the story and how they feel about their situation.
Battling foes in real-time action is similar because all three girls are different. My personal favorite character, Fuu, uses a bow and arrow and has wind magic. Hikaru uses a katana to swipe foes in a fan motion and has fire magic. Finally, Umi thrusts her rapier to attack foes in front of her and wields water magic. The three unique characteristics of each girl make fighting monsters fresh and fun. While the game tends to be on the easier side, the game retains a fun factor thanks to the fast and furious game play. As the story progresses, the girls acquire new magic and their weapons and armor power up. Perfectionists will have a ball looking for Rainbow Amulets, which grant the girls special items. It’s classic action/RPG game play and it works perfectly for Magic Knight Rayearth.