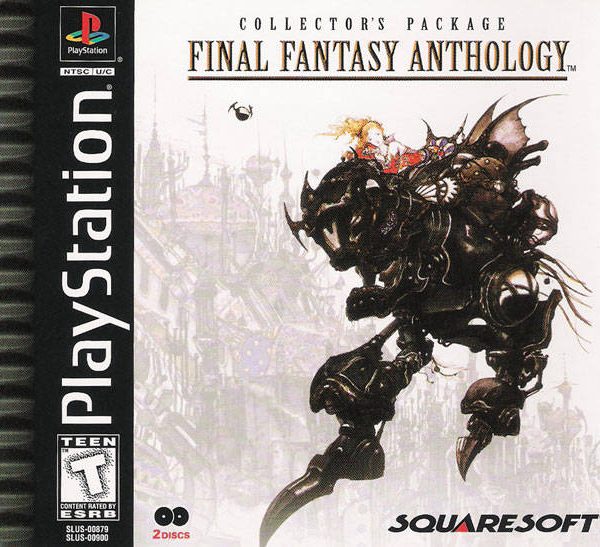 A few months after the release of Final Fantasy VIII, Square took part in an infantile trend that would eventually spread throughout the video game industry: they released a collection of games in one package. It was called Final Fantasy Anthology. These days, collections are a dime a dozen, but back in the days of the Playstation, this idea was still fresh when it came to the RPG genre. If you’re anything like me, you’ll do what you can to get the most bang for your buck. In this case, you can get two excellent titles in the Final Fantasy series for the price of one. Not only is this is a great value, but it also helps save shelf space. Whether or not you’re as practical as me doesn’t make a difference when it comes to this collection; fans of the series who haven’t had a chance to play Final Fantasy V and/or Final Fantasy VI should look into the Final Fantasy Anthology. While you can’t take these versions with you in the same way you can their Game Boy Advance ports, there is something elegant about seeing both games in a gorgeous jewel case made exclusively for the fantastic Playstation.

Since there are two games in this collection, I can go over them separately when it comes to the differences in story, setting, characters and game play. However, both games have a few things in common besides the two upper-case Fs. Nobuo Uematsu, that crazy-cool composer we all know and love, created two wonderful scores for each game. Most people already know that the music in Final Fantasy VI is a one of a kind. Aside from the opera scene, there is a plethora of wonderful music that fits each setting. Also, ‘DAT BOSS THEME! Seriously, The Decisive Battle provides such an adrenaline rush for when you’re taking down gigantic monsters. However, what about Final Fantasy V? You’ll be glad to know that this game also has a great set of music. Fans of the series will be happy to hear the original version of Clash on the Big Bridge. Both games have some nifty soundtracks that will bring joy to listeners new and old.

The other feature both games share is their look. Classic 2D sprites, 2D towns and 2D dungeons expand as far the eyes can see for your nostalgic pleasure. While FFV looks a bit dated in comparison to FFVI, both games still have that classic Square look in terms of weapons, characters, monsters, spells and environments. Also, both games have new CG cut scenes. While they aren’t as impressive as the ones we see today, they still provide some entertainment. I only have one gripe regarding the graphics. Actually, it’s more about a design choice. I was never a fan of Amano’s artwork, but I will say that Faris from FFV looks awesome. She is seen as an androgynous looking buccaneer with a fierce overcoat, a blond ponytail and just enough pirate gear to give everyone the impression that she is not to be messed with. So, why does her sprite look nothing like her? Pink hair? No ponytail? No overcoat? What gives! Minor, first-world gripes aside, the classic look was and still is wonderful. I love me some sprites!

Now then, onto the differences. First, we’ll focus on the more forgotten of the two titles: Final Fantasy V. This classic story begins with the king of Tycoon heading off to the Wind Shrine to investigate why the wind crystal has stopped producing…wait for it…wind. After hopping aboard his dragon and soaring away, his daughter, the princess Lenna, gets the brilliant idea to follow him. Meanwhile, the adventurer Bartz Klauser and his ornithological associate, Boco, are camping in the woods. Yes, his name in Japan is Butz. No, I will not be making any jokes about it. Moving on. After a giant meteor falls in a nearby forest, the two investigate the scene. They end up saving Lenna who happens to be at that same location, and the two end up meeting a variety of characters who have been chosen by the crystals of wind, fire, earth and water to stop an evil sorcerer named Exdeath. If that isn’t the worst name before Edge Maverick, I’m not sure what is. Still, Exdeath is a vile sorcerer who wants to all he can to take the world over as his own. Despite the seemingly cliche story of the four elemental crystals, FFV’s plot comes as a breath of fresh air. You will really get to know Bartz and his friends as you explore their pasts, travel on dragons and obtain the blessings of each crystal.

So, what are these blessings anyway? Final Fantasy V’s main feature that separates it from other games in the series is the job system. If you have played Final Fantasy Tactics, Final Fantasy III or even a game that had some sort of “job system” then you will feel right at home with FFV. As the characters adventure through the world, they will slowly but surely obtain new jobs. In total, there are 22 jobs to learn and each one has its use. As you earn ability points (AP) from battles, your job levels will go up and will allow you to learn new abilities. In the end, you can make a party that works for your personal style. A knight with time magic? Go ahead. A monk with thief abilities? Go for it. With 22 jobs, the options are limitless and the fun never stops. Aside from this, the game plays the exact same way Final Fantasy IV did. You move from location to location, Active Time-Battling monsters (ATB-ing is a verb! Look it up!) with swords and sorcery, leveling up and shopping in the towns. Battles are random and can often times be unwelcome, but this is the only complaint I have about this game. If not for the job system, FFV would be a complete let down. However, thanks to this feature as well as the great story, Final Fantasy V made a solid debut in America with the Anthology.

Of course, most people will consider the next game to be their favorite in the series. Unlike previous entries, Final Fantasy VI has nothing to do with four elemental crystals and the lore behind them. Instead, it takes place years after The War of the Magi, a time when magic was used as a weapon by beings known as Espers. After the war, industry and technology took over. Years have gone by, and folks seem to have forgotten about magic. The Espers seem to have vanished. Now, in the slummy town of Narshe, word has gotten out that an Esper has been spotted. Emperor Ghestal has sent a young woman with no memory to investigate. What this jerk emperor doesn’t know is that this woman, Terra Branford, has magic running through her body. It’s hard to say what could happen if she comes into contact with an Esper. A monumental adventure is about to begin with the world’s fate hanging in the balance. Terra’s adventure is one riddled with danger, so it’s a good thing she meets nearly 15 characters to help her in recovering her memory and putting a stop to the empire’s evil plans. Such characters include Edgar Roni Figaro, a king, playboy, and a brilliant inventor. My favorite character is Setzer Gambini, an Alucard-type looking man who gave society the finger and decided to travel the world on his airship. Every character is unique in some way, and their personalities shine. The large cast comes together to stop one of the most well-known villains in video game history: Kefka. Ah, Kefka. Where would Final Fantasy VI be without him, his cruelty, his face, and his laugh? It’s hard to say, but alongside Terra and her crew, Kefka adds to the excellent cast and creates a memorable story.

The neat thing about the cast and crew of Final Fantasy VI is that their personalities show their differences in battle. Like FFV, FFVI has an ATB, turn-based system. You can attack, cast magic after a certain point in the story, use items, defend and switch from the back and front rows. Each character has a command unique only to them that sets them apart from each other. Some are basic, such as Locke Cole’s ability to steal items from enemie. Other characters have some much more unique abilities. The best part of the battles is watching your characters grow as they gain levels, learn magic and get multiple options in disposing the hundreds of monsters out to kill you. Magic plays a huge role not only in the story, but in character customization as well. Sure, characters can be equipped with weapons, armor and some unique accessories. However, Espers are where the real fun lies. On your journey, you’ll find Espers that get turned into shards of their formal selves called Magicite. By equipping these, your characters will use the AP earned from battle to learn various magic spells. Obviously, the more useful spells will take longer to learn. Once the spell is learned, though, it’s learned forever. This gives you tons of options to create your perfect party. Finally, Espers can be summoned in battle for some impressive looking attacks. Battles can be a bit too abundant in certain areas, which can get stressful when you’re trying to save. Still, battles rarely last more than a minute and watching your team of heroes destroy baddies with magic, special skills and giant weapons is nothing short of classic Final Fantasy fun.

Both games in Final Fantasy Anthology have bountiful side-quests, extras and can last at least 30 to 40 hours. Purchasing the game new will allow you to obtain a bonus music CD that contains some of the music from both titles. Unfortunately, none of the battle themes are on the disc. This is a shame because, like I said, ‘DAT BOSS THEME! One issue both games do have is that the loading times can be a bit laggy during certain instances. Eventually, things sort of smooth out, but it can be slightly off-putting when you first begin. Despite that issue, this is a great collection of two classic games. Most people who enjoy the FF series have likely experienced the adventures of Terra, but haven’t had the chance to see the adventures of Bartz. Take it from me, dear readers, you should check out the anthology just for Final Fantasy V alone. Best of all, when you finish it, you can replay Final Fantasy VI. Be sure to seek out this collection of two games in the most well-known RPG series of all time.