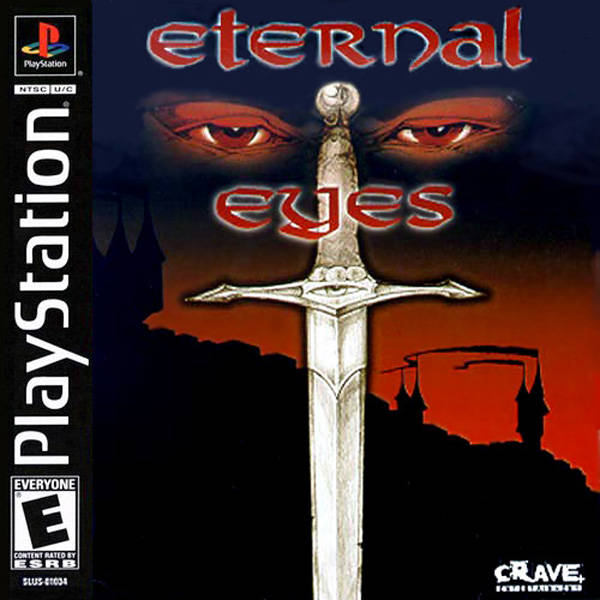 Author’s Note: This review was originally published on November 9th, 2002. Goodness gracious. This review wreaks of all things wrong. I’m still in disbelief that I wrote something so juvenile.

DAMNIT! I was looking forward to buying Eternal Eyes for various reasons. I mean, it had an anime opening, pretty anime graphics, and it was tactical with a touch of Monster Rancher on the side. Plus, I bought it new for only 8 dollars! But man what a disappointment. Well, here’s why…

Story 6/10:
A young boy named Luke stumbles upon treasure with his friends one day. He soon gets mixed up in a chain of events that lead to find out why he is the remainder of the Crimson Eyes tribe, a tribe who can create magical puppets to fight alongside with him. While I love a light hearted story, I also like ones that give a bit more depth to them. Heck, you even know who the last boss if from the start.

Gameplay-Field 8/10:
The menus are all basic and easy to learn. The towns are very easy to navigate through, considering when you open a menu, you can be automatically transported to a shop or house. I thought that was kind of nice. But the world map is one of those you don’t walk around, you open up a menu and choose your destination. I’m not all about that, I love exploring the world ^_~
The biggest part of gameplay is the puppet creation. In battles you find magical dolls that, when coupled with gems, become your magical puppet fighters. You can customize these monsters by teaching them magic. This requires more gems of course. I really liked this part of the game, but the rest of it annoyed me so much.

Gameplay-Battle 5/10:
ARRGGHH!! I love battles in strategy RPGs, but this one lost my attention so very quickly.
You fight on a LARGE grid and each side has a turn (Player turn, enemy turn, repeat…) It takes a long time for the battles to end because you have to fight over a long area. You gain levels when exp. reaches 100 (like I have never seen that before…). The same goes for your monsters. What’s worse is you have to level up sometimes. In tactical games, I love leveling up, but in this game I was like, ”Can’t…go…further…” Magic plays little to no role in battles because they don’t damage well at all. Also, Luke has only one regular attack. While Luke can equip various weapons, there is no special for him at all and this makes battles even more boring! And the battles aren’t a challenge. You will be wanting to complete a battle so bad because they are boring and easy. The battles needed a ton of work on them.

Gameplay-Character Development 5/10:
Luke and his sister become a bit cooler as time progresses, but you want more from them. And you also want to see more characters. You’ll want more depth to the last boss and his intentions.

Graphics 9/10:
Well, I loved the graphics. The cute 2D anime sprites is something I prefer over 3D polygons any day. The houses and dungeons were very pretty for a person like me to behold, but others may want a bit more detail in them. I however, liked them. Oh yeah, the anime scene is pretty good I thought.

Sound 7/10:
The sounds of every slash and thrash sound more like a little scratch. Also, the way monsters die sounds kind of…boring. Yes, this is a cute game, but a little ”poof” is just kind of basic. The sound is average.

Music 8/10:
I liked the music actually. It was fun to listen to the light hearted town music and the serene music in the forests. But there were only so many tracks. I would have loved to here more songs because the ones I did here were nice.

Replay Value 2/10:
Should you actually beat it, you aren’t going to want to play through this game again. Leveling up gets annoying, and you’ll know the story already. The only reason I can see you playing it again is to complete your puppet monster manual.

Difficulty Easy:
Just level up a bit, and this game is smooth sailing. It’s more of a task for you to complete, rather than a fun thing to enjoy.

Buy or Rent: Rent
Although it’s very cheap, I recommend renting it first. You will want to see if you like the way it plays. I did for about one hour, and then I was like, ”…end game…please just end…” I only bought it because of the money happy price, but when I think about it, I wasted more money on gas going to the mall instead of getting my 8 dollars back for the return.

Eternal Eyes looked so great. I was so looking forward to it’s release, but it had so many terrible flaws. I wanted to like this game, but I just couldn’t. Well, if you like easy games with long battles, you may like this. I only really liked the graphics. If the creators were to make a sequel, my suggestion would be this: ”Keep the graphics, change the everything else.”