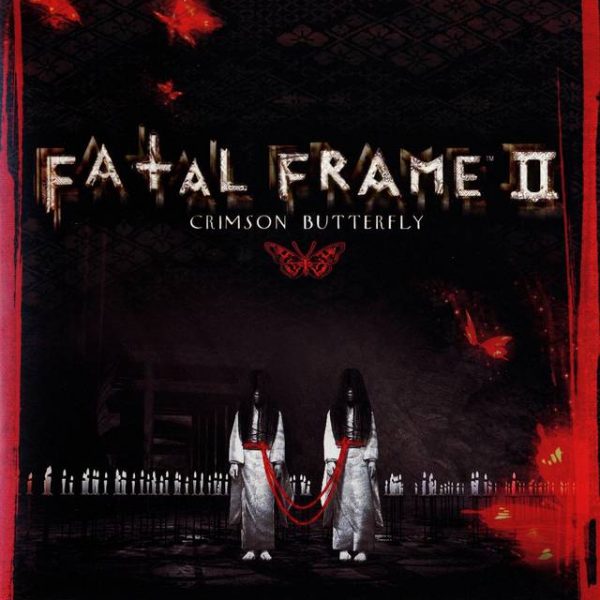 These days, it’s hard to find a survival horror game that has equal amounts of scare, emotion and beauty. However, Fatal Frame II: Crimson Butterfly manages to encompass all of those attributes in a way not found in a modern title. The first Fatal Frame did a good job of showing the potential of the series. I am happy to say that Fatal Frame II: Crimson Butterfly takes multiple steps in the right direction and makes for a wonderful gaming experience. If you enjoyed the first game, then you will undoubtedly enjoy the second.

However, if you decide to skip the first game, then you will still be able to fully appreciate Fatal Frame II: Crimson Butterfly since it’s not a direct sequel. The game is about twin sisters Mio and Mayu Amakura. When they were children, Mayu suffered an injury that permanently damaged her leg. While not as physically strong as Mio, Mayu still enjoys spending time with her sister. The game opens with the two reminiscing about a forest they used to visit that is about to be destroyed for a construction project. However, Mayu begins to chase a red butterfly further into the woods. Mio and Mayu end up in All Gods Village; an ominous town of eternal night that has hidden terrors and secrets that will determine the fate of the Amakura sisters. The story has the fears and frights that are expected from a classic Japanese ghost story, but powerful and emotional themes are added to the mix to make it one of the best tales in the survival horror genre. As you learn more about the village’s terrible past, you will see Mio and Mayu rely on one another to make it out of there. It’s great to see the bond of these sisters grow as they reveal more about the past as well as each other.

While the Himuro Mansion in the first Fatal Frame was creepy and provided a good amount of content to explore, Fatal Frame II: Crimson Butterfly takes place in the small yet sizeable All Gods Village with multiple buildings, houses and hidden caves. Players take control of Mio and guide her through these scary spaces. Sometimes, Mayu will follow and provide subtle hints about hidden items and the current objective. Other times, Mio is by herself. The game is played from a third-person perspective with a camera that shifts vantage points depending on Mio’s location. There are plenty of items to find. Some of them are used for healing and others are contain clues about the village in the form of journals, documents and newspaper clippings. You can also find gem stones that have hidden messages in them. By placing a gem stone in an antique radio, you will hear more information about the residents of All Gods Village and its history. Most importantly, you can find various types of film for the returning weapon of choice in the Fatal Frame series: the Camera Obscura.

This unique and fun weapon is back and more powerful since its last use by Miku Hanasaki. The camera can be used to solve puzzles and snap pictures of benign ghosts that provide clues and/or extra points, but it’s mainly used to combat vengeful spirits longing to stop Mio and Mayu from leaving All Gods Village. By using the camera, the perspective will change to a first person point of view. Most enemy ghosts will slowly fumble and creep towards Mio. By keeping the camera’s focus on them, the camera will build in power. The closer you are, the more powerful the shot. A Shutter Chance will occur when the screen flashes red. This usually occurs right before an attack. If you take a picture of the ghost during this instance, the ghost will flinch and the camera will gain spirit energy. Taking a picture at the right moment will also give you the chance to cause a Fatal Frame, which deals more damage than any other shot. Obviously, the more powerful films will deal more damage to the ghost. The points you earn from snapping photographs coupled with Spirit Orbs scattered throughout the village can be used to permanently increase the camera’s basic functions as well as enhance special types of shots. Special shots include Stun, Chase, Blast and other helpful functions that become more useful as you get further into the game. Fatal Frame II: Crimson Butterfly is more challenging than the first game, but the Camera Obscura’s new functionalities help level the playing field for Mio.

Of course, not everything is perfect. During the moments when Mayu accompanies Mio, there will be times when Mayu gets in the way. If you have to frantically move around a room to get a good shot at the ghost, then the last thing you need to be doing is bumping into Mayu. This doesn’t happen often, but when it does it’s bothersome. I feel bad for shoving Mio’s gimped sister out of the way, but ghosts that need exorcising wait for no one. Similar to Miku’s journey, Mio will often times be trapped in small corridors and have to fight a powerful ghost. When things get hectic, it can cause more frustration with the camera changing perspective. Luckily, the plentiful healing items and save spots should be enough for anyone to not worry about a game over.

Fatal Frame II: Crimson Butterfly has a similar look to its predecessor, but with more high-quality cut scenes and more varied ghosts. Most of the game takes place in dark areas that have been abandoned. While most the environments are either dimly lit or decaying, the presentation really pops due to the use of the titular crimson color thrown in throughout the game. Character models move and look great, and seeing a defeated ghost writhe in agony is a rewarding sight to behold. This game looks great, and thanks to better voice acting and more instrumentation, it also sounds great. The ending theme matches the emotional level of the story and is worth a listen.

Despite plenty of secrets and hidden content in its main campaign, Fatal Frame II: Crimson Butterfly takes only ten hours to finish. However, with the completion of a game on its standard difficulty comes the option to replay it on a harder setting, new outfits and a variety of missions. The missions may not offer much, but they are a nice distraction and let you figure out new ways to battle the various spirits. You can also unlock a gallery of movies and pictures. Finally, finishing the game on harder difficulties can unlock new endings. The thought of going through the game again just for the sake of another ending sounds drab, but there is something special about Fatal Frame II: Crimson Butterfly that makes it worth playing more than once. If you enjoy survival horror games but want some emotion and drama behind the fear factor, then this is a great choice.

Overall, 9/10: Fatal Frame II: Crimson Butterfly takes the first game’s formula and turns it into something special: an emotional and haunting story about two sisters that must rely on one another and the power of the Camera Obscura to make it out of a village with a deadly and tragic past.