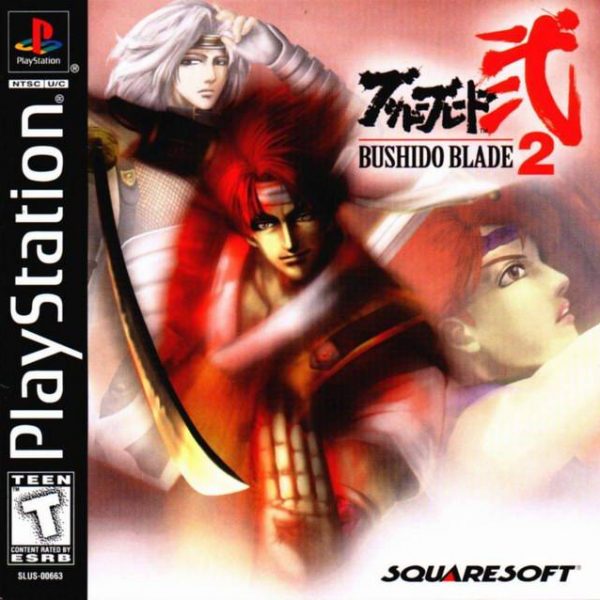 To take breaks between saving the world from Sephiroth in Final Fantasy VII and walking the regions in SaGa Frontier, I spent some time in the late 90s playing a unique fighting game called Bushido Blade. In an effort to create a realistic fighter, Squaresoft utilized a feature where a kill was achieved with a single sword blow. I felt that Bushido Blade was ahead of its time, but the problem was that it lacked replay value. A sequel, simply called Bushido Blade 2, was released almost a year later. There’s more to enjoy in Bushido Blade 2, but is it enough to keep coming back?

Bushido Blade 2’s campy but fun plot takes place on the island Kounoshima. 800 years ago, two samurai families engaged in a war that split the island in two. On one side was the Kagami. On the other, the Sue. Both families formed two schools for warriors. The Sue are attempting to reclaim a sacred sword called the Yugiri, but the Kagami are one step ahead. Both schools have warriors that fans of the first game will recognize, plus plenty of new faces. Depending on who you pick, they’ll encounter different characters on their way to one of the two leaders of the respective schools. Cut scenes between bouts are fully voiced and shed some light on each character’s history. Bushido Blade 2 has more narrative than expected from a fighting game, especially of it’s time.

I’d be remiss not to gush about the graphics. By the time it was released, Squaresoft had been recognized for releasing visually pleasing games that seemed ahead of their time. Bushido Blade 2 is no exception. The 3D characters and settings are, obviously, nowhere near the production level of something today. But, they still look great. Characters move well. The battle stages are varied. Weapons move fluidly. I still prefer my fighting games to be 2D, but Bushido Blade 2’s 3D presentation works well. Music is limited to add to the realism, but the voice acting (English language only) features notable voice actors. Anime fans of a certain age will immediately recognize some of their favorite voices.

If you have any experience with the first game, then hopping into Bushido Blade 2 will be trouble free. After selecting from one of the game modes, you’ll select a character and one of six weapons. You and the opponent will clash blades until someone is hit by a fatal hit. The fun begins after you set foot in the battlefield. Squaresoft designed Bushido Blade 2 with realism in mind. Like other fighting games, you can perform crouches and jumps, deliver various attacks of different levels depending on inputs, and execute special maneuvers depending on the character and their equipped weapon. Unlike other fighters, the above mechanics are slower and more methodical. There’s no flash or pizzazz. To add to this realism, you can sling mud at your opponent, toss a unique sub-weapon, change your stance, and attempt to deflect the opponent’s weapon with your own. It comes together in a way that requires some adjustment if you’re used to other fighting games. But, once it clicks, there’s nothing quite as satisfying as slashing a foe’s vital point and watching them fall after only a few seconds of combat.

Bushido Blade 2 is fun, but there’s one major drawback: weapons. In the first Bushido Blade, the small cast of warriors could select from one of eight weapons. In Bushido Blade 2, the more robust cast of warriors can only select from one of six weapons. Technically, they can only select from one of five weapons because the naginata and yari are exclusive to the Kagami and Sue, respectively. While having a larger cast is a perk, every character mostly performs the same. For example, Mikado has an exclusive naginata maneuver. Otherwise, her ability with a katana is the same as, say, Tatsumi. Instead of more characters and less weapons, the game would have benefited from less characters and more weapons.

But, that issue aside, Bushido Blade 2 has more replay value than its predecessor. Where Bushido Blade was fun for an afternoon or two, Bushido Blade 2 has true staying power with all of its unlockable content. Doing so is challenging. Even skilled gamers who enjoy fighting games will need to adjust if their play style if they want to see everything. Bushido Blade 2’s attempt at realism is its best feature. In an interesting dichotomy, realism is something gamers don’t want anything to do with when it comes time to game. Yet, it works excellently here.

Overall, 7.5/10: Despite its small weapon selection, Bushido Blade 2 manages to delivers more stabs, slashes, thrusts and cuts than its precursor.