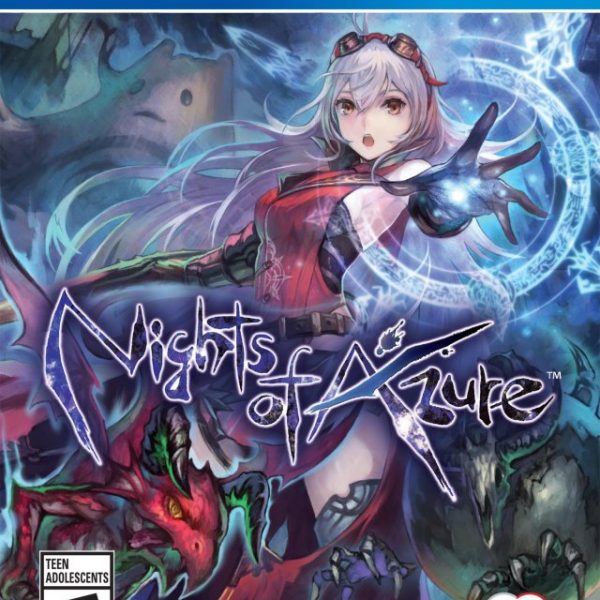 When video game developers step outside the box, I go into their new ventures with cautious optimism. This was the case with Nights of Azure for the PlayStation 4. Gust, a company that is known for featuring adorable female leads, copious item creation and well-written characters decided to take a stab at an action/RPG that has the look of a Dynasty Warriors game. Early footage of the game gave the impression that Nights of Azure would feel similar to the PlayStation 2 sleeper hit Chaos Legion. I was excited to see what was in store. Upon completing Nights of Azure, I will say that I give Gust credit for trying something new. However, nearly every aspect in Nights of Azure is missing something that could have made it a hit.

Nights of Azure takes place in our world in an alternate setting. After an epic battle that bathed the world in demonic Blue Blood, fiends come out to play at night. Warriors sent by The Curia are tasked with slaying these fiends in order to protect the citizens that foolishly wander the streets at night time. Ultimately, they need to prevent the resurrection of the Nightlord by sacrificing a saint. The heroine of Nights of Azure is a woman named Arnice. Unlike most living beings, when Arnice touched the Blue Blood she became a mighty warrior with powerful potential. During a mission from The Curia she ends up reconnecting with one of her best friends: Lilysse. The bad news? Lilysse is going to be the next sacrifice. Arnice and Lilysse’s friendship will be put to the ultimate test.

The story is one of Nights of Azure’s best features. At a glance, it looks like it would be an innuendo filled “yuri” narrative. However, there is so much more to it than that. Arnice and Lily’s relationship blossoms beautifully over the course of the game. The well-written dialogue about how much they care for each other, their history and their awful circumstance will keep you wondering what the outcome will be. It’s unfortunate that the story often gets interrupted by annoying side characters that make a sad attempt at comic relief.

Nights of Azure consists of seven chapters. Each chapter has a main scenario that is part of the story, and some minor scenarios that add to the development of other characters. During the beginning chapter, you’ll get a good idea of the game’s flow. Arnice will go to an area on the world map, fight some fiends, fight a boss and then return to the Einde Hotel which acts as her base of operations. As you continue with the story, more features will be unlocked. There is a battle arena to check out in an attempt to earn rewards. There are a variety of quick side-quests. You’ll have the ability to level up Arnice with accumulated Blue Blood from enemies. Obviously, you can shop, enhance Arnice’s abilities with skill points and talk with the others at the hotel. One nifty feature is setting out a merchant to a different location of the world on a trade voyage. When the merchant returns, chances are you’ll get a rare item. There is a fair amount of stuff to do when you’re not battling. Unfortunately, most of it isn’t very fun. The side-quests are tedious, the arena is more about trial and error than skill, and it takes a long time for Arnice to have the ability to actually reach her potential. The most important thing you can do at your base is use items called Fetishes to materialize demonic helpers called Servan. Arnice will start with one deck, which will be able to hold four Servan. There are over 20 Servan to discover. Each one has a strength, a weakness and the potential to grow into a mighty assistant for Arnice. Finally, each Servan can equip an item. The Servan system is wonderful because there is so much possibility.

Arnice and her Servan will be put to the test in battle. Nights of Azure is an action-RPG that will feel familiar to anyone that’s touched the genre. Arnice starts with a large sword and one slot that can be filled with an accessory. As she continues to level up, she’ll acquire new weapons and the potential to equip more accessories, as well as passive skills. The square button is used for light attacks, the triangle button is used for heavy attacks and the X button is used for a special area attack that costs some Spell Points. You can use a combination of square and triangle to make a variety of combos. Eventually, Arnice will be wielding a sword, daggers, a gun and a hammer. She’ll also be able to transform into a variety of demon forms, each with their own specialties. With the push of a button, you can summon Servan at the cost of some SP. The Servan will follow Arnice and help with combating enemies and/or healing the party. Each Servan has a unique Burst Attack that can be used, too. As enemies fall, they’ll leave items, restorative potions, money and Blue Blood. At the start of the game, you are only allowed to remain in an enemy infested area for 15 minutes. Luckily, this is always more than enough time. Boss battles have no time limit.

There is plenty to like in Nights of Azure if you’re a fan of action-RPGs. However, like most games in this sub-genre, things can get repetitive really quickly. Some unforgiving difficulty spikes and nonsensical boss battles make combat a chore. My biggest issue is that the Servan tend to get stuck in smaller areas. It’s just a bunch of little things that tend to add up and cloud the big picture. There are times when combat is going well and you’re filling your Blue Blood supply. But then, there will be times things range from boring to messy.

Messy is another way to sometimes describe the presentation. This PlayStation 4 title has some gorgeous artwork and environments, but most of the scenes are choppy and unpolished. For a modern console, I expected more. Like most Gust titles, the game has a colorful cast of characters but an overuse of monster designs with swapped palettes. Luckily, the music is fantastic in every regard. This is one original soundtrack worth seeking. The game is only voiced in Japanese, something to keep in mind for those people that subscribe to the “no dub, no buy” ideology.

Despite its jumps in difficulty, Nights of Azure’s main story can be completed within 15 hours. However, there is plenty to do that will extend that time. This is especially true if you’re interested in going for the platinum trophy. Gust’s risky and risqu&eacute; title just feels “there.” Every time something about it starts to shine, something else takes that shine away. It’s not a bad game by any means. In fact, there are some really neat ideas. It’s just that these ideas didn’t get fully fleshed. I recommend Nights of Azure after it drops in price and you have an insatiable craving for an action-RPG.

Overall, 5.5/10: I like that Gust tried something new, but they should stick with what they know.