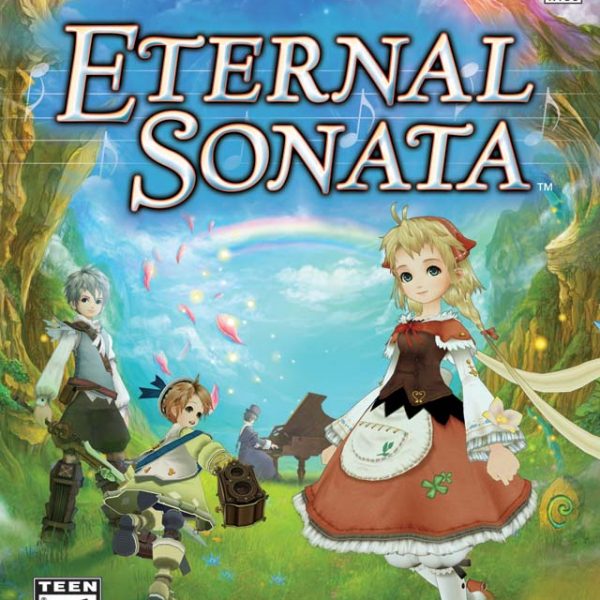 Author’s Note: This review was originally published on February 26th, 2009. Like other reviews of the time, it features “witty” taglines that serve as section separators.

Namco has been my favorite video game developer for quite some time. Ever since I played Tales of Destiny, I enjoy checking out new Namco products. Unfortunately, not all of them have been remarkable. The Xbox 360 RPG in review, Eternal Sonata, is no exception. While the game is beautiful to behold, it suffers from repetitive design and a story that gets way too preachy for its own good.

Fun With Frederic Chopin.
Our story starts off in Paris. Here, the brilliant composer Frederic Chopin sleeps in peace on his death bed. The caregivers around him cannot help but to wonder what is going on inside of his final dreams? Players are transported to his dream, where we uncover a world of magic and mystery. But, where does dream cross reality?

The story has an interesting premise, but the execution is boring. It would have been a much better story had it been told in a more exciting fashion. Personally, I did not enjoy the philosophical conversations going on between the rather depressing characters. However, nothing compares to the absolutely useless educational cut-ins that talk about Chopin’s actual life. I am sure Chopin was an amazing person and composed some great pieces, but I could look up all of that information in a book, encyclopedia, or other materials of reference. I found no need to have those bits thrown in.

A Song To Remember.
Seeing as the game revolves around a composer and characters named after musical terms, the music in Eternal Sonata was expected to be great. For the most part, the score was nicely done. Even better is the option to have either English or Japanese voice work. Both were done well, although the English speakers often times had a bit less flare and personality. Regardless of this small misfortune, the audio department was done well.

Wow…Pretty…
The best part of Eternal Sonata is the graphic presentation. Every aspect of the graphic department is downright gorgeous. Characters, monsters, environments (heck, the token-sewer dungeon is beautiful), and even the menus are quite eye-pleasing. Watching battles and certain scenarios unfold shows the power of the Xbox 360. Seriously, words in a review are not enough to give the graphics justice. However, one thing remains the same in every video game: great graphics do not make a great game. Odin Sphere, anyone?

The Monster Mash.
I say this because the battles, like the story, suffer from being boring. You see enemies on the field and touching one will begin a battle. You can touch them from behind to gain a slight advantage. The turn order is shown on the bottom. When it is time for one of your characters to attack, you can move them towards the enemy, similar to Magna Carta: Tears of Blood. When they are in range, you keep hitting the X button to dish out hits. The moment you hit X, a meter will drain. When it empties, that character’s turn is over.

At a certain point in the game, continuing to hit X will build up a counter. When the counter is high enough, you can execute a powerful special attack with the circle button. While you can use these special attacks at any time, they are only effective for when the counter is high. This is because they take longer to execute, thus your meter runs out quicker. Depending on whether or not your character is in darkness or in sunlight, their attacks will be altered. The same holds true for monsters; the lightness and darkness effects their moves, and in some cases, their appearance.

Monsters will attack you, and you can hit a button to block the attack to take less damage. Later, you can counter attack with the right button press. Needless to say, there is LOTS of button mashing. In some cases, this could be fun. In this case, it was not so fun. Sure, seeing new special attacks is interesting, but there is very little strategy involved other than get behind the enemy and relentlessly attack. I know what you are thinking. “But, that is what you do in your beloved Tales series.” Well, the Tales series has more action, more options, and thus, more options for strategy. Eternal Sonata’s battle system was too basic for me. Thus, it was too boring.

How About An Encore?
Kudos to anyone who gets the anime reference. Anyways, completing the 40 hour game will net you a New Game Plus feature that allows you to discover new secrets. I, however, have no desire to see those secrets. Once through was MORE than enough. Eternal Sonata was a masterpiece with the graphics, but it was boring everywhere else. Normally, I would recommend this game to someone craving an RPG for their Xbox 360. Come on, though, there are plenty of options that are out there now. Eternal Sonata is a game meant for RPG beginners who are fine with a boring design.