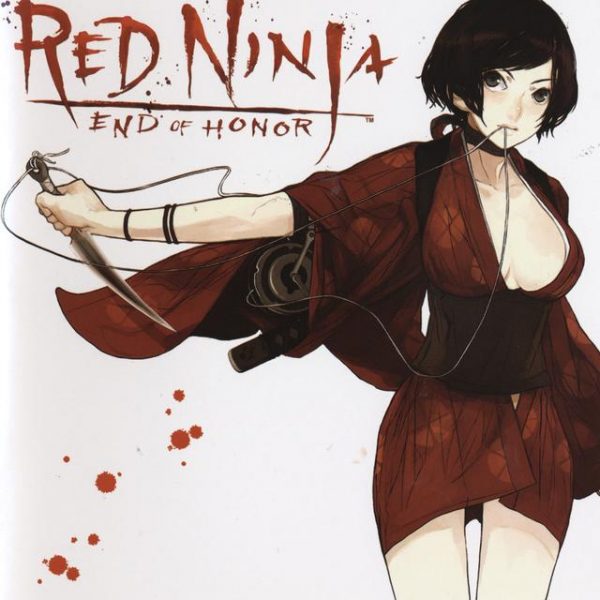 Author’s Note: This review was originally posted on April 19th, 2005. To date, this is the only review for an original Xbox game.

Oy…what a game this turned out to be. I, thankfully, rented this game because I wanted to have something to pass the time for a few nights. Too bad that I will never see that 7.25 again. Seriously folks, this game is flawed beyond all belief. What makes me most upset is that it had potential.

Story: 5/10
During an ancient Japanese war, an engineer creates blue-prints for a powerful weapon. Seeing the power of the weapon, he decides to put the blue-prints into hiding. However, the enemies of Nobunaga Oda ambush the engineer and slice his head off. Ouch. They swipe the blue prints and the engineer’s daughter, Kurenai, is left for dead hanging on a tree by a weapon called the tetsugen. A tetsugen is a bladed wire, which doesn’t look all that fun to be hung from. Kurenai is rescued by a member from the Takeda clan and learns to become a ninja. She swears revenge upon the Nobunaga.

The concept of the story is cool, but when the story starts to randomly introduce new characters that come out of nowhere that portray little emotion, the concept loses it’s cool. Cut-scenes advance the story after the missions are complete. Too bad that these cut-scenes really lack the flare expected from an X-box game.

Game Play: 1/10
Hmm, I don’t think I’ve ever given a game a 1/10. Anyway, you control Kurenai throughout the bland levels. Her weapon is the same weapon that was used to wound her, the tetsugen. This had the potential to be super cool, but it flopped miserably. Kurenai can run up walls, triangle jump, hang by her wire and swing from it, swim, and move stealthily across the ground. Kurenai also can stealth kill her enemies up close or from long range with her tetsugen wire. The stealth kills aren’t anything impersive like they were in Tenchu, but they work. If you miss a stealth kill or the enemy sees you, you’ll fight it hand to hand. You can execute a four hit combo, which is relatively boring but gets the job done because the enemies are kind of moronic, or you can fight at a semi long distance with her tetsugen. The tetsugen attaches to an enemies head, feet, or torso for some pretty cool results. If you run after attaching the tetsugen, you can clothes-line enemies. Besides her primary tetsugen, Kurenai gets kunai, smoke bombs, blow guns, and other ninja tools. To heal any damage, you use potions. A rather worthless move is the seduction skill. Kurenai can attempt to seduce her foe with her sexy body in hopes of pulling off a stealth kill. Maybe I have rotten luck, but this never worked for me. Finally Kurenai can slow down time (I know ninja are cool but not THIS cool) to run around enemies quicker. At the end of the stage, you’ll fight a boss. Usually they are challenging on account of the wide variety of moves they’ll spit at you. Still…it’s important to have boss battles in ninja games.

All this stuff that Red Ninja offers sounds cool. It was at first until…I dealt with the terrible camera. The camera is a mess, a train-wreck, a catastrophe. The camera always tries to follow Kurenai. It seems helpful, but since Kurenai moves waaay faster than the camera, it jumbles everything up and gives you a terrible viewing perspective. If you’re jumping from cliff to cliff or crawling through a tight hole…the camera is going to somehow mess you up. The lock on system is no better, and causes Kurenai to change direction randomly. Seriously, the camera ruins the entire game. Some will manage to get used to it, however I chose not to because one should NOT have to get used to a crappy camera. The camera is supposed to help you, not hinder you.

Graphics: 6/10
Blood floes everywhere in this game. It’s affect is not the most realistic thing you’ll ever see, but it is amusing. The X-box version’s visuals do a great job with lighting affects. The backgrounds, however, are bland as bland can be. Really, it’s just the same old same old for every level. This is quite upsetting when you know what the X-box is capable of. The characters aren’t much either. All of them have this…blank expression on their face that makes them look dumb. For a ninja bent on revenge, Kurenai sure doesn’t act like it.

Music and Sound: 3/10
Now don’t get me wrong, I love ancient Japanese sounding music with the wooden flutes and the zither harps…but when the track repeats itself 80 times AND you actually hear the track starting over (think of the sound of an old record player) I draw the line. Other than that, the music was done relatively well.

Too bad the sound, mainly the voice acting, is a different story. Kurenai’s voice actress is on the mellow side, and the rest of the cast of voiced characters really lack enthusiasm.

I had high hopes for this game because I love ninja. I love female ninja even more! This, however, is just sad. I expect more nowadays from video games that have a 3D environment with a camera. After the horrendous Kingdom Hearts camera problem, I thought I’d never see anything worse. Red Ninja: End of Honor proved me wrong. If you like ninja games, play something else. The camera ruins the entire gaming experience.