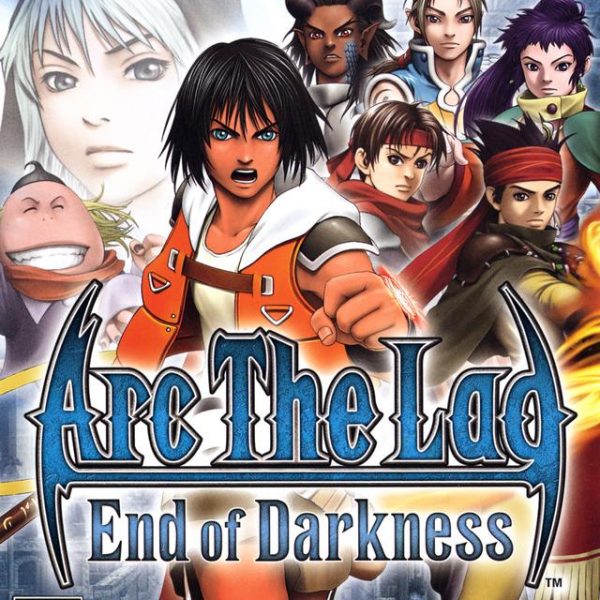 Arc the Lad: End of Darkness takes place five years after Twilight of the Spirits on a small island. Edda is a resident and with his friend, Hemo, he lives a rather mundane life. One day, Edda discovers that he has mysterious powers to exorcise beasts known as malademons. The malademons come from the negative thoughts of humans and it’s up to people like Edda to stop them. Following the call of destiny, Edda becomes a hunter to use his powers to rid the world of evil. Now, Edda will discover more about himself, a terrorist group known as Truth Sword and a mysterious young woman named Kirika.

The only good part about the story is that you get to see your old friends from Arc the Lad: Twilight of the Spirits. Other than that, there’s nothing special about it. I wouldn’t mind so much if Edda added anything to the script as a main character. He’s bland, his mascot buddy Hemo is obnoxious, and Kirika deserves to be slapped around.

Since you get to see your old friends from Twilight of the Spirits, it’s expected that the graphic engine is seen again. Arc the Lad: End of Darkness looks about the same as Twilight of the Spirits. This is a good thing because the graphics look great. The foliage sways in the wind, the characters are expressive and the overall art direction adds to the island life atmosphere. The music is great; probably the highlight of the game. That’s not a good thing if the music is the best part.

Progression in Arc the Lad: End of Darkness is one of the biggest problems. Instead of a following a quest as in previous games, Edda will take on various quests at the Hunter’s Guild and from a bulletin board. Tasks from the guild are usually quick fetch quests. A more difficult task from the will grant Edda more rewards, but Edda will lose more if they fail. Bulletin board tasks are longer and give you Dignity Points that let Edda level up. After the right amount of tasks are completed, the story continues. It’s not a bad way for an RPG to play, but it’s bad for Arc the Lad. Arc the Lad III may have had a guild, but at least that guild was more of a supplement.

No matter the task, Edda will have to ready for battle. This leads to another huge problem: combat. Instead of the strategic combat the series is known for, you will have one character running around a field in an action/RPG set up. Most of the time, you’ll be hitting the X button over and over to perform the same combo until the enemy dies. All your items and skills are on cards, which you can purchase at shops. Edda will use them by holding R2. During battle, you can hold the triangle button to regenerate your card points faster and hitting the circle button will perform a special attack that will exorcise foes with a black mist surrounding them. Still, the battling is an absolute drag. It’s rare to have to worry about losing because the normal combo attack will do enough damage to anything. Thus, the usual process is performing a combo, dodging, waiting for the enemy to stop flashing and then going back to the combo.

A saving grace, but not of a substantial amount, is that certain cards let you become characters from previous Arc the Lad titles. Unfortunately, they play no role in the story and they, like Edda, are limited to the same arsenal that Edda has. As fun as it is to see the cast in action, it’s nothing that could save the game from being such a pain to play. Even worse, is that End of Darkness’ biggest claim to fame is an on-line mode. Sure, doing missions with others over the Internet could be fun, but only if done right.

It’s such a shame that the Arc the Lad’s swan song had to be this title. I can’t recommend it to anyone, even fans of the series. Everything that made the series special has been thrown away for a lame story, poor character development, boring battles and an on-line mode that should not have been the title’s claim to fame.