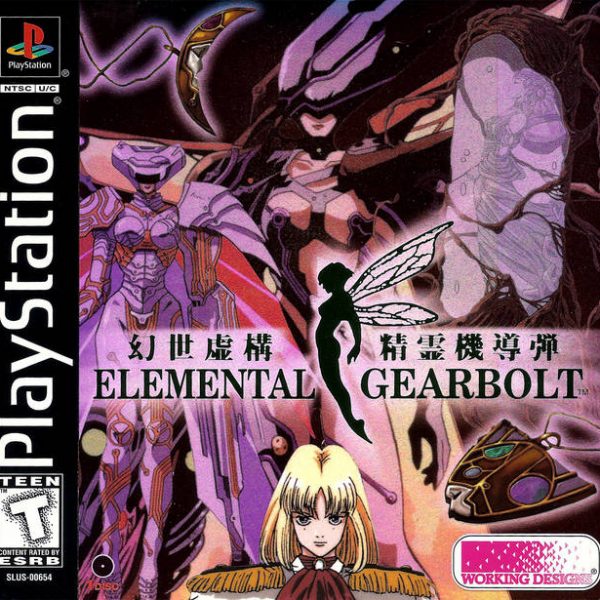 Working Designs had a tendency to dabble in genres outside the RPG realm. While their “Spaz” subsidiary focused on crazy, shooting games, the main branch took it upon themselves to handle Elemental Gearbolt. This is an odd title that mixes rail-shooting with the story-telling and level building of an RPG. It sounded like a unique idea. At times, it executes both genres well. However, the end result ends up being hardly worth remembering. In fact, the only thing I can remember about EG is the box it came in. Seriously, Working Designs knew how to make things look shinier than a bedazzled cellphone.

To my surprise, there was a heavy amount of lore and backstory in EG. It takes place in a world dominated by two races: Sulukan and Audo. The Audo rule with an iron and cobalt fist with technology while the Sulukan believe in the power of magic. Now, a battle with the Espers must begin. Nah, just kidding. Actually, two sisters that are half-breeds of both races named Nell and Seana are reanimated by an entity known as the Network after a tragic battle. Returning to the world as Elementals, they are out to stop the diabolical and selfish ruler of the world, Bel Cain, and this mysterious Network. This is a unique story for sure, despite it being a very short lived one. Fans of RPGs and science fiction will likely get enjoyment from watching Nell and Seana lay waste to their enemies with metal and magic. Unfortunately, the same cannot be said about playing as them.

From the start of the game, it’s clear that the enemies mean business. In typical rail-shooter fashion, you are on a predesigned path and need to shoot enemies and bonus items. You can use a light-gun attachment or the controller to aim. One thing to mention is that modern, HDMI televisions don’t recognize the shot from a light gun. Thus, most people will be using a controller. Enemies come in all shapes and sizes throughout the long stages. Fortunately for you, there is no need to reload your gun. Also, you have three types of bullets at your disposal. There is the Blaze Phoenix, which is a slower but more powerful shot. Personally, this was the one I used the most. Next, there is the Thunder Tiger spread shot. Finally, you have the Water Snake, which acts as an Uzi. Depending on what you’re facing, you will need to adjust your bullets. When the stage ends, you are rewarded with the option to distribute points to level up. This means you can take more damage or increase the potency of the bullets.

All of this sounds like a fun experience, but one thing is clear: the game has not aged well. This is, unfortunately, EG’s biggest problem. Controls aren’t as responsive as they should be, there is a lack of a quick-save feature, and in order to get the full experience you need to unlock the game’s various difficulty levels. Thus, playing on easy will only get you to the third stage. You have to do it all over again with the next mode, which will also end abruptly after one of the middle stages. This was a crazy idea since rail-shooters are a genre that are difficult in nature. Instead of having the full game on three modes, you have to play on the most difficult to see what happens in the intriguing story.

Back to the topic of the story, one of the game’s better features is the animation. Rintaro directed the animated cut scenes and, needless to say, they look great. Watching it with quality animation is a real treat. The regular game graphics aren’t as praiseworthy, but they get the job done. The enemy design is worth checking out since there are some unique baddies to shoot. Finally, the music in the game comes from Wakasuka, who has worked on plenty of RPGs in his day. While there aren’t any tracks worth a purchase, they are at least worth a listen. Too bad the sounds aren’t as crisp and may cause you to turn the volume on mute. Ah well; you can’t have your cake and eat it, too.

Despite the fact that you have to go through the game multiple times, Elemental Gearbolt is short. Unless you’re dying for a new rail-shooter, I recommend looking elsewhere. For those on the other end of the spectrum who wish to learn more about the interesting story, I say watch an LP or a video guide to save yourself the trouble of dealing with outdated game mechanics. Elemental Gearbolt is an ambitious titles with interesting ideas. Unfortunately, these ideas weren’t well-executed. However, one final thing to note before finishing this review, my dear readers. A neat thing about EG is that a contest was held a few months after it’s release. Those who scored the highest were rewarded with a beautiful, one of a kind, gold painted light-gun from GunCon. Not only that, but it came in a gorgeous case. If you truly want to experience all that Elemental Gearbolt has to offer, I suggest taking a look at these rare beauties. As for me, my time with Elemental Gearbolt was enough to realize that the game isn’t one worth recommending. Despite all of the shimmer and shine in the packaging, it ends up being a mediocre game.