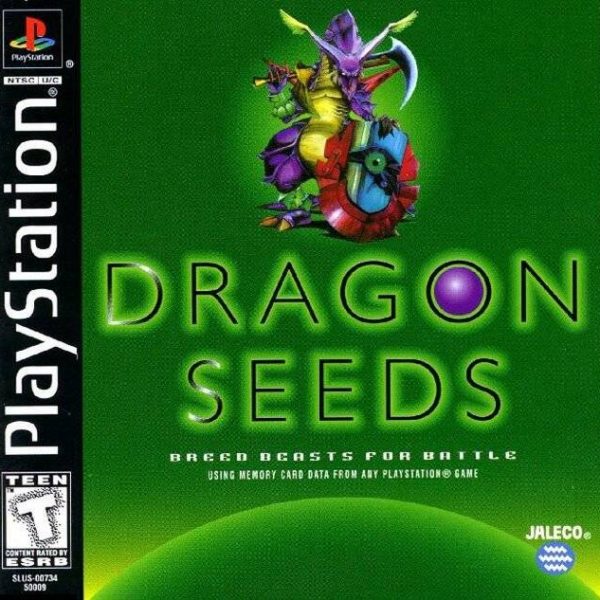 Dragonseeds is an odd title. Even before starting the game, it’s apparent that it is unique among other games due its green and purple cover art and its game features’ descriptions written in an oddly shaped font. Dragonseeds is a game I spent a fair amount of time on, and yet, I really have a difficult time judging it. If you randomly come across this obscure game, then understand its a monster raising simulator. You need to go into this game with the mindset of doing nothing but raising dragons for battle.

Before getting into the game play details, I want to point out two strong aspects in Dragonseeds. The first is the music. Dragonseeds has a great soundtrack that perfectly combines genres such as tribal anthems, Japanese pop, rock, jazz and electronica. Not once did I want to mute the television during any moment since each track was so great. Dragonseeds won’t appeal to most folks, but the music is worth a listen by everyone.

The second aspect is the presentation. Dragonseeds combines the best of both 2D and 3D style. Warm City, it’s NPCs, item graphics, and equipment, are presented in 2D. Special mentioning needs to be given to the NPCs. Each one has a unique look, but they wear garments that have similar patterns and motifs. It makes the city feel more realized. During battle, the game shifts to 3D. There are a variety of dragons available; being able to view them in full 3D is a fun sight. It’s impressive for a game as old as this to offer 3D presentation that doesn’t look as crude as other games’ of the era.

With that out of the way, we can discuss the core of the game: raising dragons to compete in a battle arena. That’s it. Interestingly, the game does have an introduction that gives the impression that there is some story. For those that really get into the game and properly develop their dragons, you could read between the lines and interpret the world of Dragonseed in a number of ways. Before taking control, we learn that the Earth started to slowly but surely face destruction due to the melting of the ice caps. But, scientists discovered a new type of species from the melted ice. Over time, this species became known as the dragon. Presently, people across the world raise dragons for battle in order to make a living. Some dragons can be caught in the wild, but most of the time, people build their dragons at the molecular level.

Unfortunately, that’s as much story as you’re going to get. Some sort of narrative would have gone a long way here, but the any semblance of one is gone after the initial events. Warm City is explored via a point and click map. Typically, you begin by going to the lab to breed a new dragon. You’ll first pick a race. The race of the dragon will effect it’s innate element: storm, fire or aqua. This gets chosen at random, but certain races of dragon seem to favor certain elements. After the race is selected, you need to add a strand of DNA by forming a phrase with preset words. There are no “best answers” to this but by using logic, you can usually put the right words together to make a good strand. Finally, you’ll get to name your dragon. You can create a dragon at any time and store them in cells. You’re given 16 cells, but chances are you’ll only use a few of them.

After the dragon is born, it gets taken to the nursery. You can choose two stats to raise when you leave it there for the night. While going anywhere will pass time in the game, the best choice would be to go to your apartment. Here, you can save your game, pass time via resting, check out your collection of items and equipment, view trophies, and/or configure the game’s controls. After 24 hours has passed, you can head back to the nursery to pick up your baby dragon. Dragons will age over the course of the game starting with baby, then adult, then senior, and then a special type of class that will get determined based on its statistics. You can set your dragon free at any time by visiting the Memory Forest.

There are two shops in Warm City. Nancy’s shop will let you buy weapons and shields for your dragon to equip. Iwashi’s junk shop randomly has items that will increase your dragon’s abilities. The area you’ll likely spending most of your time is the Training Center. Here, you can pay a small fee to raise your dragon’s stats. There are two mini-games and a mock battle that you can play to raise its stats. At first, they’ll seem close to impossible. Over time, they become easy to master. As long as you have enough money, you can train your dragon as much as you want. In order to increase a dragon’s hit points, you will need to let it rest. However, resting comes with a decrease in evasion.

Buffing up your dragon is somewhat fun at first, but it can get tedious very quickly. To make your dragon become as powerful as necessary to compete in the arena, you need money. Lots of money, actually. The best gear and copious training are required to build your dragon. While there is a trick you can do to get more money, the game expects you to raise a dragon as best you can, compete as far as it can in the arena or at the pub, get it killed, and let you start the process again with your winnings. It’s a tedious formula.

When a dragon falls in battle, it’s gone forever. Battles in Dragonseeds are one on one and use a turn-based system. You and the opponent select two actions and watch the duel unfold. You can attack with a weapon, use a special, block with your reflective shield, move forward or backwards, or taunt. Reflecting will repel a special, but it won’t block an attack. Attacks can cancel specials if in range. Once again, battles are fun the first few times as you try to read the opponent. But, over time, they can drag and be nothing more than an exercise to wait out the clock.

Dragonseeds doesn’t have an end. The game is considered beaten after you earn the top slot in the arena. Once those scenes finished, you and your dragon are plopped back into Warm City and you can continue to play. This means Dragonseeds will last you as long you like. If you really enjoy the game play, then countless hours can be clocked. If going through the motions enough times to finish the final arena battle is enough, then Dragonseeds will last about ten hours. With the exception of its presentation, Dragonseeds would have been a hit had it been given extra attention in every area. As it is, it’s a standard monster raising simulator that wares out its welcome.

Overall, 6/10: Dragonseeds has a strong start and clever concept, but its game play becomes too repetitive too soon.