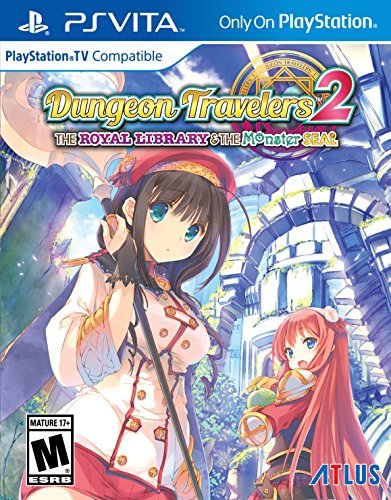 When I told some of my friends that I was about to start Dungeon Travelers 2: The Royal Library & The Monster Seal, they warned me that it would be a lengthy and difficult journey. They said that it was the most challenging dungeon crawler that they’ve played on a system that has a plethora of dungeon crawlers already available. Dungeon crawlers usually have a steep difficulty, but with enough level grinding, anything can be accomplished, right? Dungeon Travelers 2 will require more than high levels for you to be successful. It will take preparation, planning, strategy, and an iron will. You will get your butt handed to you over and over again if you don’t take the time to understand the game’s job/skill system and/or refuse to take advantage of all the game’s features. Despite it’s grueling nature, Dungeon Travelers 2 is a game I highly recommend to experienced gamers that are ready for a rewarding challenge. Before getting into it, I feel the need to mention that Dungeon Travelers 2 has copious fan-service. Within the first minute of the game, you’ll be exposed to CG images images of girls in questionable positions performing questionable actions. The enemies you fight are usually represented by beautiful women with little clothing and odd poses. Personally, I found all of this both hilarious and entertaining. If you’re sensitive to this sort of thing, then Dungeon Travelers 2 is not for you.

Dungeon Travelers 2: The Royal Library & The Monster Seal takes place in the Kingdom of Romulea. Lately, earthquakes and storms have become more frequent. This has caused monsters in the kingdom’s various dungeons to become more hostile. Members of the Royal Library have been asked to suppress these monsters. Fried Einhard, a Libra of the Royal Library, is wandering a cave when he bumps into two of his friends: Alisia Heart and Melvy de Florencia. The two of them are on a suppression mission and decide to travel with Fried. Fried and his friends need to get to the bottom of this increase in monster activity. The story is as simple and basic as they come. However, it’s the fantastic writing and hilarious interactions between Fried and a bevy of beautiful women that make the script worth a read. There is more depth than expected with these characters. Usually, dungeon crawlers don’t offer much in the way of characterization. Dungeon Travelers 2 is a breath of fresh air since you’ll learn about your teammates that fight with Fried.

But, the story will be the last thing on your mind the further you get. About 90% of your time will be spent in a dungeon. When you’re not in a dungeon, you’ll be in the Library’s guild. Here, you can shop, listen to lectures from the hilarious Maid Sensei, take on side-quests for rewards, create Monster Books (more on those later) and, most importantly, get your party ready. Fried doesn’t do any fighting in Dungeon Travelers 2. Instead, he relies on the protection of gorgeous women of the Library to protect him as he seals monsters in his magic book. Up to five ladies can be used at a time to form a party. The further you get, the more characters will join you. Each character has a special Unique Skill. However, the aspect of Dungeon Travelers 2 that is the most critical in party preparation is understanding the job system and determining the best way to allocate Skill Points that get rewarded upon an increased level. There are five classes of jobs: fighter, magic user, spieler, scout and maid. When characters reach level 15, they can advance to a mid-class job. When characters reach level 30, they can advance to an advanced class job. Each job has a variety of skills that can be learned and enhanced. The variety of options available is impressive. With so many options, it can almost feel overwhelming to try to find the perfect party. While some jobs are more useful than others, the variety makes it fun to build your party. One of the best features you can do is reset your characters’ levels when they reach level 15, 30, 50 and/or 99. Doing this will let them retain all of their Skill Points so you can redistribute them in a way you see fit. The job system in Dungeon Travelers 2 is the the most impressive feature the game has. You will see its full effect in battle.

From the moment things begin, it will be clear that Dungeon Travelers 2 is hard. To give you an analogy, think of it as Dark Souls, except in the form of a turn-based, dungeon crawler with gorgeous women in a vibrant anime world. Battles are simple in theory. When one of your characters’ turns comes up, you select an action. Sometimes, your team can perform team attacks if their motivation is high or you brought the right group of girls together. Remember all those passive and active skills that I talked about earlier? The way you utilize them will be critical for both regular battles against large groups of enemies and boss battles that will ruin your day. Spells take time to chant. Monsters can curse your team with debuffs and ailments in the blink of an eye. Certain enemies can attack multiple times. However, with the right allocation of Skill Points, your team can do the same thing. The feeling of gratification from winning a tough battle is worth the struggle.

Two aspects can help give your team an advantage over the enemy. The first are Monster Books. When an enemy is defeated, they get absorbed into Fried’s book. When enough of the same enemy is absorbed, you can create a Monster Book that can be equipped. Fried can equip Grand Monster Books which come from bosses. These provide benefits to the entire party. Eventually, you’ll be able to use these Monster Books to enhance your equipment. Taking the time to enhance your equipment will turn your party into a female army of mass destruction. It’s costly, but worth it. Speaking of costly, most items in the shop require a fair amount of gold. Managing your money is another aspect of the game’s challenge. Finally, the dungeons themselves are filled with trap doors, one way exits, anti-magic zones, and more that will make the trekking more difficult. Be prepared to head back to the guild often to regroup. All of this comes together to form a dungeon-crawling experience that is fantastically fresh and familiar. Enemies of all shapes and sizes hit hard, but there is always a way to overcome any obstacle.

Dungeon Travelers 2 is a gorgeous game. Even without its over the top fanservice, it’s a game worth a look due to all of the detail given to both the characters and environments. Seeing every enemy represented by a femme fatale is fun. Depending on the jobs you select for your team, you get to see Fried’s friends in a variety of lovely outfits and ensembles. The game is voiced entirely in Japanese and has a great collection of music. Aquaplus is always on point with the presentation of their games. Dungeon Travelers 2 is no different. One thing to point out is that a few of the CG images received some censorship, but it’s nothing detrimental. Truthfully, those that understand how to use an internet search will be able to find the censored images.

Dungeon Travelers 2: The Royal Library & The Monster Seal is a long game. While only ten chapters, each chapter will take you a long time to successfully finish. You are looking at least 60 hours of game time from the main campaign. For those that can’t get enough of the game, Dungeon Travelers 2 offers a substantial, hefty amount of post-game content that will challenge every fiber of your being. Overall, this game could last you 200 hours. I had a blast with Dungeon Travelers 2. Sometimes things felt unfair, and sometimes I felt the random battles were too random. Those complaints aside, I highly recommend this game to all fans of dungeon crawlers. It’s difficulty cannot be emphasized enough, but at the same time, neither can its level of fun and satisfaction.

Overall, 9.5/10: Don’t let the innocent look Dungeon Travelers 2: The Royal Library & The Monster Seal fool you. It may look demure, but there is a brutal vixen ready and waiting to punish foolish gamers that think this will be an easy campaign.