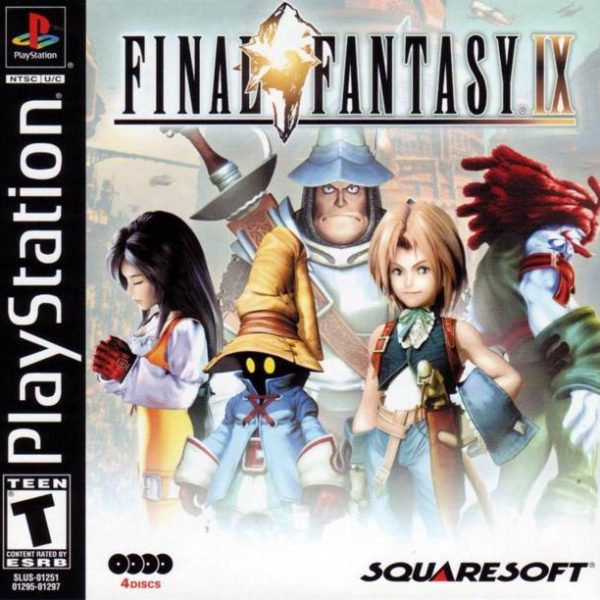 Kupo, wark, and salutations, dear readers! I’m finally getting around to covering one of my favorite titles in the Final Fantasy series, and not a moment too soon. Lightning Returns is still hot off the press, but I had to pay homage to a kupo-tastic title in this RPG power series. Final Fantasy IX is one of the few games I can play more than twice and enjoy the experience every time. Square’s Playstation swan song comes highly recommended for a variety of reasons and, after the unconventional Final Fantasy VIII, takes a necessary step back into the original realm of Final Fantasy with black mages, white mages, red mages, airships, and so much more.

This story is about a young man-thing named Zidane Tribal. With a Meg Ryan haircut and a goofy monkey tail, one wouldn’t suspect Zidane to be the awesome, mighty warrior that he is. Also, he’s a thief with the strength of a knight. Thus, he is awesome and you will enjoy getting to know him. He and has troupe of thieves plan to kidnap Princess Garnet of Alexandria during her birthday and make a pretty Gil with her ransom. As all of this plotting goes on, we get to meet a young, huggable black mage named Vivi Ornitier plus Garnet’s guardian knight, Adelbert Steiner. Steiner is a loyal and devout soldier, but good gracious is he goofy looking.

So, Zidane’s plan goes slightly awry. It turns out Garnet wanted to escape her castle walls and hops on board Zidane’s airship. As Zidane tries to escape Alexandria, the ship gets damaged and he gets boarded by Steiner and Vivi. Don’t worry, they’re all good, but they end up in a forest and begin a monumental adventure full of mystery and romance. Also, action. Lots and lots of action. FFIX’s wonderful story is a non-stop ride with some memorable characters. Despite some of their youthful appearances, Zidane and his friends are fantastic. Furthermore, their world is fantastic. I have never seen so many Moogles in my life.

While Final Fantasy IX takes a step back in terms of a fantasy setting, the game looks splendid. Thanks to multiple FMV sequences and endless creativity from Amano, this is a great looking game no matter the circumstance. By this point in the series’ life cycle, this has been expected. Again, the characters look a lot different than they did in FFVII and FFVIII, but they still look great as they fight with unique weapons, cast impressive spells, and go head to head with plenty of monsters. Nobuo Uematsu has returned to give yet another collection of music worth hunting down. This time, the piano was the instrument of choice. The amount of keyboards both new and classic were used to make the fantasy setting more lifelike.

As you can see so far, Final Fantasy IX has the look of a modern game but is set in an older setting. Taking this one step further, battles in Final Fantasy IX use a simple but divine Ability System and allow you to have four people in your party at a time. Characters can equip weapons, armor and accessories. Each piece of equipment has an ability that only certain characters can use. Once enough Ability Point are earned from battle, the skill is learned permanently. Some of these are passive and require magic stones to be equipped. Active abilities are used immediately and usually consume magic points. For instance, Vivi is the only one who will learn black magic from his rods. Garnet and Eiko can learn white magic from their weapons. Steiner and Zidane learn unique abilities to play to their abilities as a knight and thief, respectively. In other words, FFIX has done away with a system that could make each character the exact same. In both FFVII and FFVIII, you could customize your characters to be clones of each other. In FFIX, this is not the case. This is such a breath of fresh air after dealing with the cumbersome Junction System from FFVIII.

Battles themselves are turn-based and, yet again, feature the ATB System. Like I said above, four characters can participate in battle and can attack, use skills, use items and things of that ilk. Thanks to abilities learned throughout the game, each character has a strength and weakness. Vivi will never land enough damage with a physical attack, but his spells can topple even the mightiest of foes. Summon spells made a return and, thankfully, don’t last as long as they have in the past. Finally, instead of Limit Breaks, characters will enter Trance Mode when they receive enough damage. This will allow you to access new abilities that turn your character from mighty warrior to unstoppable demigod. Overall, battles are just as fun as always. Unfortunately, the encounter rate can be a bit high in certain areas.

When you’re not going blade to fang with monsters, you will be doing a variety of other things. Shopping is available in most cities and certain types of gear can be made with raw materials. A card game called Tetra Master can be played with NPCs around the world and provides an excellent distraction from world saving. Finally, there are tons and -TONS- of side-quests and mini games. For those that want to do it all, the amount of stuff to do will last close to 80 hours of game time.

And those 80 hours were well spent the first time and the most recent time I played Final Fantasy IX. I have enjoyed the three FFs on the Playstation, but number nine remains my favorite for a variety of reasons: it takes place in a great world, we get to meet great characters and the Ability System lets each character excel in their own special way. There is just one thing that really drives me nuts about the game and makes it go from a perfect score to a nine. I’m talking about the final battle. When you meet the flamboyantly epicene main villain of FFIX, you will slowly but surely come to despise him. I am talking about Kuja. Kuja has a very effeminate appearance, but do not misunderstand: he’s a total baddy and ready to take over the world. That all gets thrown out the window by the time the last fight arrives. I won’t spoil anything, though. If anything, overcoming that nuisance means you get to witness a heartwarming ending. Final Fantasy IX is one of the greatest games of any era and it comes highly recommended to Final Fantasy fans new and old.