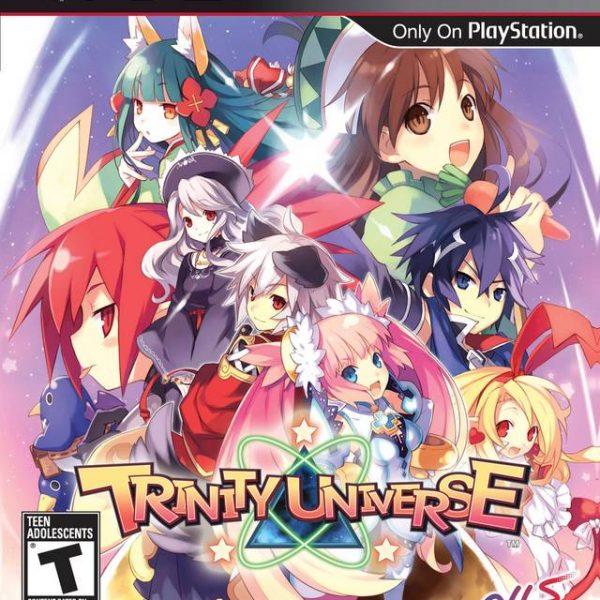 Author’s Note: This review was originally published on March 2nd, 2011. The review title mentions me going through the game three times. I’m actually going to have to go through it a fourth time in order to get all of the remaining trophies. Similar to other reviews of the time, this review features “witty” taglines that separate each section.

Dungeon crawlers and cross-overs are two sub-genres of RPGs that typically don’t do well in the United States. Thus, Trinity Universe wasn’t looking too hot. Plus, it was from the nutty developers over at Idea Factory. Most games that come from them have a slew of problems, such as their prior PS3 title called Cross Edge. Did Trinity Universe continue this trend or is it a game that will make anyone forget Idea Factory’s previous slip ups?

Cosmic Cleanliness.
Trinity Universe takes place in the Netheruniverse’s kingdom of Empyria that is under attack by littered, drifting objects in the kingdom’s orbit. These objects range in all shapes and sizes: donuts, signs, doors, bonsai trees, carrots, cars, baseballs, wooden planks and so on. Other objects are much bigger, such as ruins and castles, and can potentially cause huge damage to Empyria. Now, two heroes are going to embark on a quest to decipher the cause of these drifting object and save the entire Netheruniverse.

The first hero is Kanata, a prince of the Yoma clan. Originally, Kanata was going to become the Demon God Gem, but the ritual had some translation issues and he became the Demon Dog King instead. Kanata leaves Empyria’s castle to go on an adventure and save his kingdom. The second hero is the Valkyrie, Rizelea. Riz’s UFO has crash landed on Empyria and she decides to take it upon herself to find the cause of the drifting objects. The end result is two wacky stories with heroes and villains that cross paths plenty of times to create a lighthearted tale. Having two protagonists means two unique story arcs. While the goal of Kanata and Rizelea is the same, they only join up during the very end. Thus, there is plenty of incentive to play the game more than once, which is the only way to obtain the true ending. Luckily, Trinity Universe usually takes about 25 hours to complete the first time and most of the data can be carried over in subsequent files. This makes going through a second time less time harrowing.

The best part about the story are the various characters, both familiar and new, that join your ranks. Favorite Disgaea characters such as the Prinny, Flonne and Etna join up with new character like Mizuki, Lucius and Tsubaki. My personal favorite character from the Atelier world, the ghostly Pamela, makes a hilarious return. The interaction between the characters is full of tongue and cheek humor, 4th wall breaking and video game references. Fans of anime will feel at home the most.

Insanity! Insanity, I tell you!
The sheer amount of stuff to do in Trinity Universe is a combination of overwhelming and fulfilling. While on the main screen, pressing the square button brings up a variety of options. Dungeon lets you explore a dungeon, Event lets you witness a story event, Inn lets you rest for a day, Gallery allows you to look at character art, Anchor allows you to keep a drifting object from drifting away and Shop grants you access to the shops. To some, this is where the fun begins. While not all shop options are available to you from the get-go, I’ll explain them to you anyway just you can understand the madness that is Trinity Universe. The regular shop lets you buy, sell and synthesize items. There is also the Monster Coliseum. By creating monsters from Monster Souls, you can earn rewards that boost your stats, as well as decent experience points. In the Managraphic Shop, you can make Managraphics for your weapons. These images alter your weapon’s look, performance and the rewards you get from battle. The Meteorite Workshop lets you create Meteorites. These stones grant you more stat bonuses. As the game progresses, you can increase the amount of meteorites you can equip if you have the right materials.

Like I said, it’s insane. I barely scratched the surface. While it is fun to create all of this stuff, I can’t emphasize enough the amount of it to create through synthesis. The best items, graphics, meteors and monsters can only be created by finding the best rarest in vast amounts. There are oodles and oodles of things to create. Want the best stuff? Be prepared to make a shopping list of items to find, where to find them and how much you need. Following that, you have to find the right dungeon that carries this stuff.

Dabbling in item creation will determine whether or not your party is capable of saving the world or capable of taking over the world. If you want to experience the true ending, then you need to get ready for plenty of grinding. The best items come from item creation (or DLC) and the end result of obtaining these will turn your party into a force to be reckoned with. Since this is an Idea Factory game, it’s usually in your best interest to grind for both items and experience. It will make the dungeon trekking much less painful.

Conquest Under Heaven!
The dungeons in Trinity Universe consist of pirate ships, rockets, libraries, museums and other structures. Within each structure is a gravity core. By destroying the gravity core, you will kick the dungeon out of orbit. While the basic formula for the dungeons is simple, there is more to it. Pressing the square button lets you search for hidden treasures and monster hunting areas which are all indicated by a colored line. Red means a hunting spot, yellow means a treasure, blue means an image card and white means a gravity core. The gravity cores are typically guarded by a boss and on your way to the boss, you’ll uncover heaps of treasures and items. You’ll also fight monsters that allow you to experience the battle system.

Up to four of your characters can participate in a battle. At a glance, the turn based seem may seem complex. However, thanks to the informative tutorials, battles are easy to understand and have plenty to offer. Characters can attack as long as they have enough AP. The start of a character’s turn begins with the push of a button. The square button executes a combo attack, the X button executes a critical attack, the triangle button executes a magic attack that hits all enemies and the O button initiates a preset ability. With the exception of the O button, the right combination of buttons will yield a combo. More combos are obtained through level ups and new weapons. With enough combos, you and your team can join together deal more damage in a party combo and decimate the foe in crazy-go-nuts style.

As the combo count rises, so does the Image Gauge. The Image Gauge allows you to perform special attacks, heal your HP and guard against enemy onslaughts. Battles happen at random and (sometimes) inconvenient intervals, but they can usually be finished within a couple of turns. Boss battles usually require you to build up your AP so you can attack with more combos.

When you finish a dungeon, you get a rating. As your rating increases, you get the ability to enter more dungeons that yield greater rewards. Certain dungeons are labeled as Event Dungeons that advance the story forward upon completion. While these do provide you with some good stuff, the best stuff is obtained by taking the extra effort and seeking out new dungeons to explore that have no relevance to the story. Grinding, unfortunately, becomes a necessary evil near the end of the game due to certain bosses being capable of taking away huge chunks of HP against the entire group.

Digital Art.
Trinity Universe is a fine looking game. During the story events, you get treated to fully sized character art. What sets it apart from other games that use this style? Well, the characters are actually breathing and moving their lips to the words. It looks great, despite the fact that there are times when actual character interaction could add more effect. An event that sticks out is when a Prinny asks why Etna is holding the Prinny like a football. It could have looked more believable without the giant portraits and with character interaction instead. But, that’s what you get when you get a game from Idea Factory: excellent artwork with little variety to it. The breathing characters spice things up, but certain instances need actual character interaction.

Watching your characters in dungeons and battle is more satisfying. Their transition from 2D portrait to 3D polygon looks wonderful. The PS3 could have been pushed more, but the battles are full of flashy effects, a plethora of explosions and some of the most over the top special attacks this side of the Mason-Dixon Line. Wait until you see Flonne’s EX Skill! The biggest issue lies within the structure of the dungeons. With such a wide variety of structures, you would think that their interior would match the exterior. The bland design of most dungeons makes exploration less exciting than it should be for a dungeon crawler.

Cosmo Lagoon.
Something very important to keep in mind before picking up Trinity Universe is whether or not you like J-Pop. The theme song of Trinity Universe, Cosmo Lagoon, plays on a loop while you’re on the main menu. Personally, I love it. Others may start to get annoyed by it. The rest of the music is wonderful; perfectly fitting for anime inspired video game. The voice acting, be it English or Japanese, helps in getting through the huge amount of well localized, hilarious text.

The Unholy Trinity.
The interesting thing about Trinity Universe is that I played through it three times. During my first file, I winged it and got the bad ending. During my second file, I got the good ending thanks to frequent tips gathered from a walkthrough. On my final file, I got the true ending. A word of caution to those who wish to see it all: get ready for pain. While the initial chapters in Trinity Universe are easy, the final bosses are brutal. The true ending final boss takes brutality to the next level. This is typical for Idea Factory, so I knew what I was getting into. In the end, I have a hard time recommending Trinity Universe unless you’re a true-blue dungeon crawler fan that doesn’t mind steep difficulty. Sure, the game looks good, sounds good and has a hilarious story, but the biggest issue is the game play. Once again, Idea Factory proves to have nothing but good ideas overshadowed by bad ones.